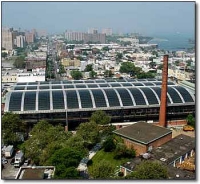 Brooklyn, New York [RenewableEnergyAccess.com] The newly reconstructed Stillwell Avenue subway station in Brooklyn has become the city’s first solar-powered train terminal, and one of the most environmentally friendly mass transportation sites ever built in the United States. It’s also among the more prominent displays of how solar photovoltaic (PV) power can be architecturally integrated into a large structure.

The 76,000-square foot solar roof, manufactured by RWE Schott Solar (RSS), is expected to contribute approximately 250,000 kWh a year to the station’s power needs. “For the first time, the city’s subway system will have a clean and efficient source of energy, an environmentally sound way to keep this terminal up and running round the clock, year round,” said Donald Press, General Manager, Advanced Materials at RSS. “The MTA has surely set an example for the rest of nation.” The new arched solar roof, consisting of 2,730 building integrated photovoltaic panels (BIPVs), covers the full width of the station and offers effective weather protection for travelers as well as station facilities. This seamless integration of the technology gives it a distinct aesthetic quality. “Stillwell Avenue Station showcases what can be done with photovoltaics today,” said Steve Cohen, Product Manager, Architectural Glass for RSS. “Solar systems don’t have to be bulky add-ons to a structure anymore, but become an integral part of it.” RSS said their thin-film panels solar modules are the largest in the world, requiring less framing to reduce installation costs. The partially transparent 5′ x 20′ glass laminate panels used in the station are made of clear glass and strips of thin-film amorphous silicon material. According to RSS, longevity and easy maintenance were primary concerns for the project, because New York’s subway system operates around the clock and shutdowns are expensive. “Integrating the technological and aesthetic vision for the station with the rigorous requirements of the MTA made this project especially challenging,” says Press. The solar roof was designed for easy access, allowing for maintenance and replacement of panels from above via an arched gantry and integrated maintenance cat walks. Monitoring makes detection of panels that are not functioning easy. Prior to installation, RSS Solar coded and tested each panel for size, weight and wattage. These specifics were entered into the monitor system to allow for quick detection of any deviation. Once identified, a problematic panel can be tested right on the shed and then easily replaced, if necessary. The MTA mandates specific light levels for platforms, based on perceptions of safety and security. The solar shed roof allows 20-25% light transmission, helping to meet these requirements while reducing costs for daytime lighting. “The Stillwell Avenue Station shows that a large public agency can lead the way when it comes to environmentally sound construction,” says Press. “This station is destined to serve as a model for other projects throughout the country.”