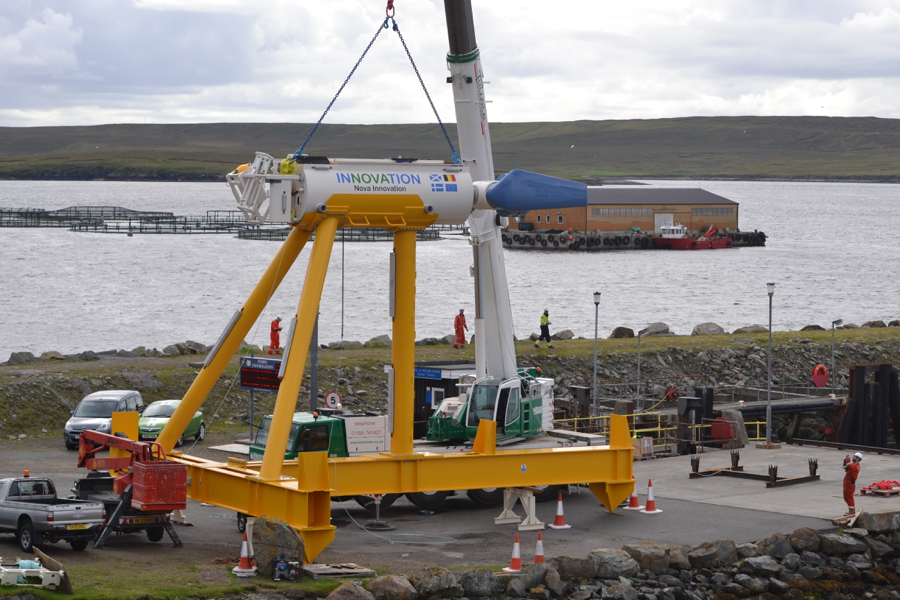 The feat was announced by Scotland’s Nova Innovation after its installation late last month of a second 100-kW tidal turbine in the Bluemull Sound, off the coast of Shetland, Scotland. An initial device, of the same specification, was installed in March, and has been operating since then delivering electricity on a commercial basis into the local electricity grid.

Simon Forrest, managing director of Nova, told Renewable Energy World: “The whole Nova team are delighted with what we’ve achieved over the last few years, especially the events of the last few months. The improvements we’ve seen from deploying the first device to the second, really indicates a very good future for tidal power, in what is still the early stages for the industry.”

Nova has been working on the ‘Shetland Tidal Array’ together with its partner Belgian-based ELSA. “Our partnership with ELSA has really delivered a great deal to the project — it’s testament to the value of pan-European partnership,” Forrest said.

With experience of deploying multiple devices in the water, Nova is already seeing advances in deployment of the technology.

“Between the first and second deployment we’ve seen clear gains,” Forrest said. “For example, we were able to drastically reduce costs of deployment just through a process of learning by doing.”

In addition, he said that the first deployment required a full tidal cycle of approximately two weeks, while the second deployment was completed within a 24-hour period.

“In terms of bringing down costs, this bodes well for future O&M,” he said.

Nova’s M100 tidal turbine features a rotor diameter of 9.5m and is a gravity-mounted device that docks with a substructure that sits on the seabed in about 30m of water with draught clearance of about 15m. The complete system, including ballast, weighs around 140 tons.

The tidal array, however, is not yet complete.

“A third M100 device should be installed towards the start of 2017; that will complete the first phase of the array,” Forrest said. “Then we’re looking to add another two devices in 2017/2018 to bring the array up to five devices, with a capacity of 500 kW.”

The event marks a significant milestone for Nova — a company that, since 2010, has been pioneering marine energy systems and has been involved in design, build, installation, commission and operation of several tidal energy projects.

The success will no doubt be shared by Scotland as a whole — a small nation, but one rich in engineering heritage and now home to much of the world’s most advanced marine energy technologies and testing.

Commenting on this, Forrest said: “Scotland is a hive of activity for marine energy — there’s a lot going on. The potential for marine energy is vast, not just for Scotland but worldwide. We’re looking at other markets in North America, Europe and Asia as well.”

The UK-based Carbon Trust estimates a global tidal energy market of £126 billion (US $166 billion) could be developed by 2050.

For its part, Nova is playing a significant role in realizing that potential.

“We see the M100 as a product, and there’s a market for that size of machine going forward,” Forrest said. “We intend to scale up to higher capacity machines also, but our strategy is ‘start small, think big’. We believe power generation technologies are best started at smaller scales — it allows for a rapid pace of innovation whilst balancing financial and engineering risk.”