WASHINGTON, D.C. — In one 50-minute period last month, the Intro to Engineering students at Chatfield High School in Jefferson County, Colorado, charted the strength of solar panels at their desks, then climbed through a trap door to examine the 100-kilowatt solar array on their school’s flat roof.

“You see a couple of panels that have been shattered by last year’s wind storm,” teacher Joel Bertelsen told the 32 students, who were peering intently at the panels when not testing the springiness of the roof. “It hasn’t affected the efficiency of the system much so far.”

As more and more schools install solar panels on roofs, more and more students inside are getting a wide spectrum of knowledge about solar energy — thanks in part to the U.S. Department of Energy’s National Renewable Energy Laboratory (NREL).

Jeffco Public Schools is Colorado’s largest school district, with (nearly) 86,000 students and 154 schools — and it sprawls from the plains to high mountain peaks.

Jeffco Public Schools paid no upfront costs, and the “Solar on Schools” project is expected to save Jefferson County taxpayers $2.88 million in energy costs over the next 20 years. RSB Funds will own and maintain the solar panels, and it will sell the electricity the panels produce to the district at a price below its current utility rate.

To further amplify its green credentials, the school district two years ago called for proposals to bring solar into the classroom.

“We worked with Golden Power Partners to incorporate a user-friendly data acquisition system that the teachers and students could use in the classroom to get live data about their solar systems,” Linda Lung, manager of education programs at NREL, said.

Golden Power Partners and NREL chose DECK Monitoring to set up a system that allows the students to see how their solar panels are working at the very moment, that day, that week, that month, or that year. And the students can compare how fast their school is turning photons into electrons compared to a school 30 miles away.

“And in Jefferson County, that can mean vastly different weather,” Lung said. “There could be a blizzard in Evergreen in the mountains, while the sun is shining in Arvada — or vice versa, for that matter.”

Students are having great fun finding out how weather can affect the panels’ performance. 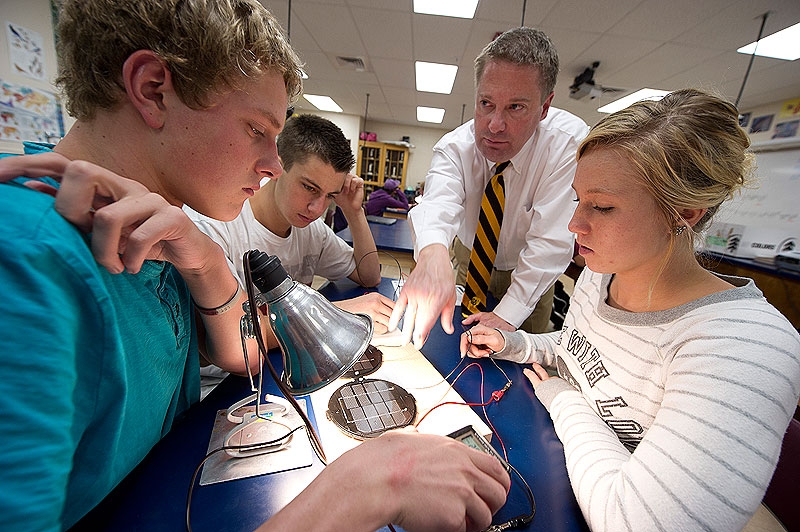 To ensure that the students get first-rate knowledge about solar energy, NREL used the $30,000 awarded to the winning proposal to organize spring and summer Energy Institute for Teachers workshops attended by the most interested math and science teacher from each of the 30 solar-powered schools — which include elementary, middle, and high schools.

“NREL worked with Jeffco staff to integrate standards-based renewable energy lessons with the data monitoring system so teachers could incorporate the actual real-time data into science and math classes. The photovoltaic system becomes a learning laboratory and an exciting learning tool — plus the school benefits from all the clean, renewable electricity it produces,” Lung said. So a sixth-grade math teacher might have students graph differences in peak performances or changes brought on by cloudy days.

Bertelsen attended NREL’s spring workshop and wasted little time incorporating solar into his Intro to Engineering class, which is comprised of seniors with their eyes on two-year or four-year colleges.

On a recent day, Bertelsen’s students were using meters to gauge the changes in volts and amps as artificial light moved farther away from the CD-case-sized solar wafers at their desks.

After a few more measurements, a few hot fingers, and a few false starts, the pattern was clear:

“There’s a direct relationship with the amps,” Hoff said. “Twice the distance means half the amps.”

“But the voltage doesn’t change much no matter what the distance,” said Brian Hoover.

“I’d say that as the light is spread over a larger area, the light is more dissipated, so it is producing less current,” Marcello Nicoletti said. “I know from last year’s class that voltage is potential flow and current is actual flow. So it makes sense that voltage wouldn’t really change much.”

That’s the kind of deductive reasoning the Solar on Schools program is meant to inspire.

Bertelsen noted that his enrollment numbers have increased by about 60% since incorporating renewable energy into his curriculum.

“During registration last year, I emphasized to prospective students the renewable energy piece that I had added to the class. I’m trying to get students excited to be a part of the solution to one of the most important problems we will face as a society: diminishing resources in an energy-hungry world.” 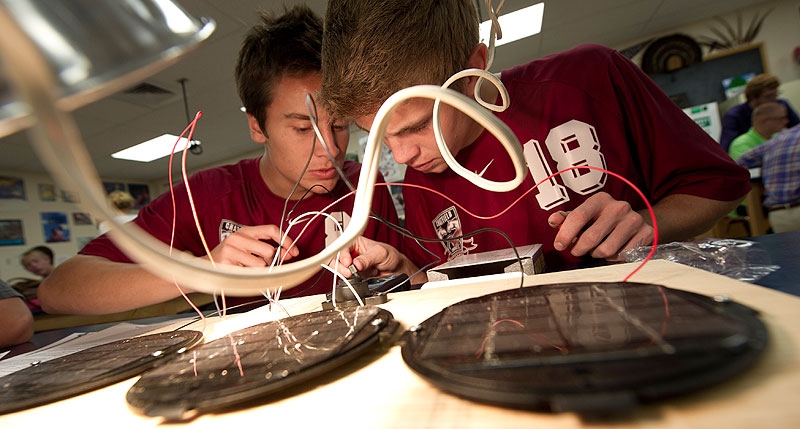 “Once we’ve learned some basics using the three-panel test boards, we can expand to calculate how many of our little panels we would need to match our 100-kilowatt system,” Bertelsen said. “This will allow us to tie what we’re doing in the classroom to the system on the roof.”

He was wowed by the DECK Monitoring software, which he says will give him more options. “We’ll use the software to study daily output, weekly output, monthly, and beyond. In addition, we can study the effects of weather on output by using the irradiance, cloud cover, and temperature readings that are displayed on the DECK Monitoring website.”

After learning about photovoltaic electricity generation, his students will study ways to store the energy when it’s not being used. They will consider many different methods of energy storage, including hydrogen production through the electrolysis of water, battery storage, and potential energy storage, which pumps water into a high reservoir for later use in a hydroelectric plant.

The students like the hands-on learning — but except for grumbling about the price of gasoline, they don’t have a good grasp on the pros and cons of fossil fuels versus renewable energy. Bertelsen hopes to change that.

The trip to the roof was a good start, as students probed him with questions about angles, wavelengths, and hail damage.

As the students headed down the trap door from the roof, Nichole Hagen, the only girl in the engineering class, said she won’t be dissuaded by the gender imbalance. She knows that at NREL, just a few miles away from the school, women make up a sizable minority of engineers and scientists. “I want to be an architect, and energy efficiency is getting so important in new houses,” she said. “When we run out of natural gas and coal and stuff, we’re going to have to find new energy sources.”

Teachers across the country can visit the NREL Education website to find solar energy lessons to use in their classrooms.

Other resources for teachers include need.org, which has lesson plan ideas around renewable energy, and the Department of Energy’s Energy Efficiency and Renewable Energy website.