Emily Dickinson wrote, “Fame is a fickle food upon a shifting plate.” Just a few short months ago solar was big news globally, sometimes touted as the hope for a planet suffering from climate change, offering an industry filled with shiny new factories, perhaps even the new job creation engine for the US.

From 2005-2010 the global PV industry grew by a compound annual rate of 65 percent, and in 2010 shipments of technology to the first point of sale grew by 120 percent over the previous year. What a wild ride it was — and then,  three U.S. bankruptcies (including a very loud one) coinciding with an upcoming election year in the US … well, what a difference a few weeks make. Solar is the topic currently, and not in a good way — the present rush to demonize the PV industry is simplistic and threatens to stall progress.

Warning: this is not an article about any company in particular — it is about the leadership in PV manufacturing shifting from the US to Japan to Europe to China and Taiwan. All of the data used are primary (hard market data) and the analysis is independent and original. This is also a reality check on the nature of industry margins — bluntly, for most of its ~40 year history, technology manufacturing has operated on negative margins. Traditionally, solar has been a buyer’s market.

The PV industry still needs incentives and subsidies, and to keep these incentives and subsidies it has promised to wean itself off of them while remaining profitable. Frankly, these two topics are currently mutually exclusive, and unfortunately, the industry has promised itself into a corner from which it cannot emerge with higher prices lest it be seen as breaking its promises.

The solar industry is filled with true believers, who can sometimes be blind to market and technological realities. The daunting task ahead of all solar technology manufacturers is to develop a technology that will operate efficiently for at least 25 years in the sun (meaning, sometimes very hot sun and very bad weather), and become ever cheaper to manufacture.

(A personal observation: I have seen many a technology roadmap promising that solar will cost ~25 cents/Wp to manufacture, despite the industry’s lack of control over its raw materials over and above the cost of polysilicon and rare earth metals and including the cost of aluminum, steel, glass, consumables, silver, etc. Nothing is free and everyone is taking margin from the raw material manufacturer to the system installer — though these days cell and module manufacturers are taking very little margin indeed.)

The promise of ever-lower prices ignores the cost of hiring and supporting a highly trained staff, the cost of continuing R&D, and often ignores any discussion of margins. This promise of ever-lower costs ignores the subsidized cost of other energy technologies. Moreover, it keeps the discussion focused on cost — instead of focusing on the other attributes of solar. These other attributes include (among others): long running, relatively low maintenance (O&M), and the creation of direct and indirect jobs. Currently there are myriad of articles all filled with facts and the dissection of these facts about the solar industry, particularly PV. Maya Angelou said, “There’s a world of difference between the truth and facts. Facts can obscure the truth.”

Currently a number of factors are holding prices down: high capacity, high levels of inventory, softer demand, a myriad of module assemblers (not the same thing as technology manufacturers), and the continuation of a degree of aggressive pricing. Third-tier manufacturers are pricing product at <$1/wp,> Figure 1 presents prices to the first point of sale. In some cases, these prices are not passed on to the consumer, nor, frankly, should these prices be passed on to the end user, because all along the chain participants need to take margin in order to stay in business. 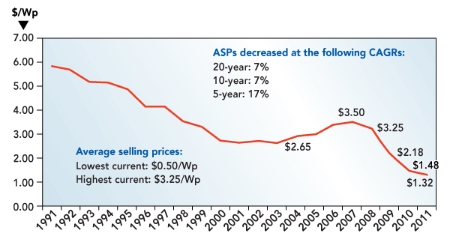 Until 1999, the U.S. was the technology manufacturing leader (meaning that it shipped the most watts to the first point of sale in the market). Then in 1999, manufacturers in Japan took over the leadership position and held it until 2007, enjoying government support for technology development, manufacturing and for their home market development. Though Japan did not have specific domestic content requirements, the market was essentially closed to manufacturers outside of the country. In the early 2000s, Germany developed the feed-in tariff model of incentives; other countries in Europe eventually followed suit.

The early FiTs operated like a 20-year annuity. For obvious reasons, the FiT incentive attracted investors. In a sense, the FiT is responsible for the multi-megawatt installations (utility-scale in the US) that now consume most of the industry’s megawatts. This relatively new application is also the most highly competitive. The FiTs are expensive to support, and without specific controls (or, a lack of transmission) they overheat markets rather rapidly. This overheating market behavior drove the industry to multi-gigawatt levels, bringing along rampant speculation in some markets and changes (some retroactive) that are also leading to the rapid demise of this incentive instrument. Future incentives may be FiT-like, but the new incentives will not resemble the first FiTs.

In 2007, Europe took over the leadership for technology shipments — and held it for only one year. As the FiT-driven market in Europe boomed, manufacturers in China announced that they were going to vertically integrate from one end of the value chain to the other and control the market. The traditional PV industry did not believe this because PV manufacturing is extremely expensive and the manufacturing of polysilicon even more so.

However, unlike most announcements (always remember, announcements are not data), the announcements by Chinese manufacturers proved largely true and were accompanied by aggressive pricing for share. In 2008, manufacturers from China/Taiwan (primarily manufacturers in China) took over the leadership position and held it. Aggressive pricing for share is not an unheard-of strategy in PV (and other industries), but with high levels of capacity and the current incentive structure the PV industry as a whole is likely stuck with artificially low prices for some time. This is particularly true as the incentive landscape changes in Europe and new markets must be developed. Table 1 presents data on manufacturing leadership from 1997 through 2010. 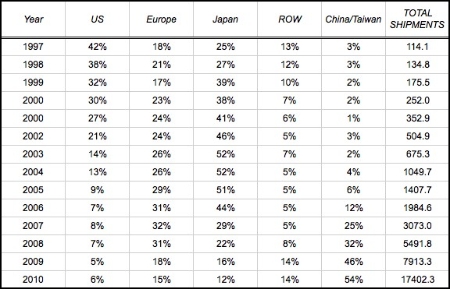 After several years of low manufacturing utilization, the PV industry recovered to 77 percent utilization in 2010. Unfortunately, this is likely to drop to 61 to 66 percent in 2011 as industry capacity rises to ~36-GWp. Table 2 offers regional capacity data from 1997 through 2010. 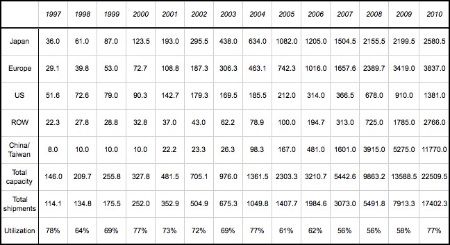 What does it all mean?

Simply put, prices will stay low and margins constrained for some time. As the world switches to renewable energy as the primary source (and it will switch eventually), the costly growing pains will cause energy consumers and stakeholders to point fingers when things do not go as hoped. With proper investment, any region can take over the technology leadership, but the investment required for this progress is significant — and the bigger the PV industry gets, the larger the investment requirements become, and the more highly visible the successes and failures.

That no technological innovation or change is either cheap or easy should go without saying, but perhaps it bears repeating again and again. The bigger solar gets as an industry, the more the failures will reverberate, but that’s something the industry will have to deal with, as these are the growing pains of all industries. The higher the hopes, the bigger the disappointment — but the disappointed should remember that no progress comes without failures, and that someone is learning from them.

About failure, Bill Cosby, American humorist, said it best: “I don’t know the key to success, but the key to failure is trying to please everybody.”

This article was reprinted with permission from ElectroIQ as part of the PennWell Corporation Renewable Energy World Network and may not be reproduced without express written permission from the publisher.