Assistant Professor of Physics Alexi Arango has been telling students in his Renewable Energy class for years about a little house in Maine that’s so energy efficient that it heats itself without a furnace. 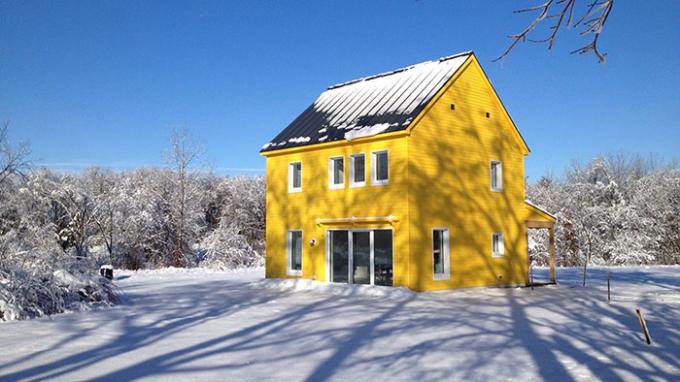 “I love the reaction,” he said of students in the physics and environmental studies course, which is open to all majors. “There’s disbelief, and the concept almost seems magical. Then you go through it and talk about the physics, and it’s really not some wild idea.”

Arango, whose research focuses on highly efficient solar energy systems, now is bringing the course’s lessons home, in the true sense of the word. He recently built and moved into a 1,000-square-foot “Passivhaus,” or “passive house,” in Amherst, which operates entirely by solar power.

Arango, who writes a blog about the house, uses the real-life example to illustrate physics and environmental science concepts in the classroom. While students are originally “incredulous,” most have become enthusiastic about the project.

“It’s unconventional to do what I did,” Arango acknowledged, but noted that passive houses are almost mainstream in Germany. “Culturally, we may be a little behind the times in how we think about our buildings.”

The Science of Renewable Energy

The Renewable Energy course (PHYS/ENVST 104) focuses on the risks associated with burning fossil fuels to the ecosystem, human health, and global economic vitality as well as methods of converting the energy infrastructure for use with renewable sources. In the course, students build an understanding of the science and mathematics behind renewable energy and learn how to communicate effectively about possible solutions to energy challenges.

Mount Holyoke senior Indira Rakhimzyanova, who is from Russia, said she found the course and Arango’s project inspiring—so much so that she wants to pursue a career in the renewable energy field and build a passive house some day.

“If every person made this choice, we could have a dramatic impact on trying to mitigate climate change, since buildings are a large fraction of our carbon footprint,” she said. 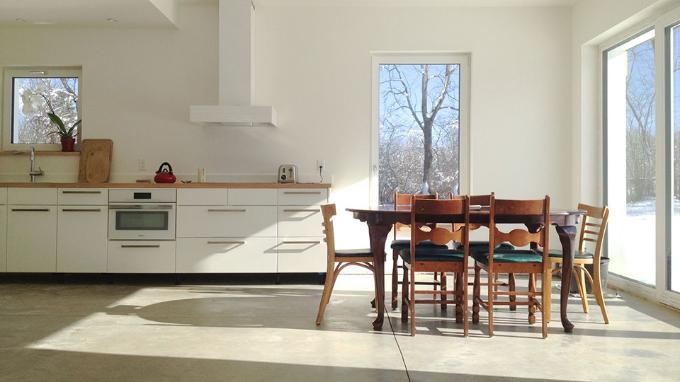 The project architect, Matthew O’Malia of Belfast, Maine, credited the professor for committing to a real passive house rather than implementing a few energy-efficient measures.

“It’s great that he made that goal and stuck to it,” O’Malia said, comparing the efficiency of the house with a car that gets 200 miles per gallon of gas. “It’s hard to understand a passive house until you live in one. Part of the story is the technical side but the other side is the comfort. It’s just a better way to live.”

Arango called the house “amazing in every sense of the word,” not only for its energy efficiency but also its comfort. In addition to the health benefits of not burning fossil fuels around the home, the perks of the passive house include uniform temperatures, ample fresh air, “floods of sunlight in every room,” low energy bills, and the quietness of not having a heater switch on and off at night.

Arango also kept his students in mind while developing the construction plan.

“I designed certain aspects of the home to serve a pedagogical purpose,” he said, noting that he invited students to test certain items to see firsthand how they conserve energy. A real-time energy-monitoring system allows students to download an application on their phones or computers and see the energy use of ordinary tasks.

“The point is to remove the mystery of energy usage and understand the impact of one’s behavior,” Arango said. “It’s fascinating to walk around the home, turn on a faucet or appliance, and see exactly how much energy is being used.”

Senior Bahia Marks of South Africa, an architecture major, said she was intrigued by Arango’s house project because of her interests in renewable energy and affordable housing.

“The way our homes are built can really shift our attitudes about the environment, and even our connection to each other,” she said.