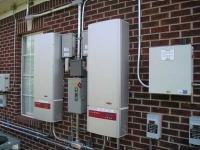 Remote controls usually make life just a fraction of a degree simpler. They keep a couch potato from ever having to watch an entire commercial. They allow drivers of fancy cars to voice-activate an engine, much to the amazement of jaw-dropped observers. Originally published in Power Engineering Magazine.

Remote controls usually make life just a fraction of a degree simpler. They keep a couch potato from ever having to watch an entire commercial. They allow drivers of fancy cars to voice-activate an engine, much to the amazement of jaw-dropped observers.

In the power industry, remote controls make life more than just a little simpler. Remote monitoring allows a solar plant operator not only to control, but, in many cases, to track and monitor the plant from a distance. While many solar plants were operating on Ethernet-based technologies at their inception, new technologies in fiber optic monitoring devices and cellular-based technologies are breaking into the solar market, easing issues related to outside interference and making installation simpler. Meanwhile, the growth of the solar market is leaving some technology companies in search of a form of wire-free monitoring for growing numbers of solar plants.

The value of fiber optics

Ed Schultz, renewable energy business development manager for Beckhoff Automation, said Beckhoff introduced its fiber-optic based remote monitoring system, the EtherCAT, in February. Some of Beckhoff’s PV customers—a 750 MW project through San Diego Gas & Electric and an 850 MW project through Southern California Edison—were previously conducting remote monitoring via Ethernet. However, Schultz said that one wrong move made under Ethernet-based monitoring, such as a cut cable, could shut down operations.

Schultz said that with the EtherCAT technology, Beckhoff can pinpoint where the failure was, which increases performance, decreases cost and diagnoses a problem in a short period of time.

Not only are these fiber-optic monitoring systems reliable, but because they are PC-based, they can be accessed as easily as an email account.

“When you run PC-based controls, you have access to it anywhere in the world. You can be sent information however you want to via phone or wireless; your imagination is the limit,” said Schultz.

In terms of issues caused by buildings, planes or other interference, Schultz said that the fiber optics used in the EtherCAT technology are resilient to noise. While some companies are looking into wireless remote monitoring and control systems, Schultz said one downside to wireless is its relative inability to block noise, such as broadband disruptions from a plane flying overhead.

When it comes to troubleshooting solar power generating systems, it often requires a team of individuals employed by a company to keep everything running smoothly. The Flash Technologies division of SPX Corp. launched its ArgusON brand of Solar Power Management Solution in 2009 to address remote management issues in solar plants.

“ArgusON is a remote asset management system. We don’t just provide a monitoring solution. That was the gap we saw in the solar industry,” said David Wise, director of business development for ArgusON.

While many companies employ in-house troubleshooting, ArgusON’s system is able to troubleshoot, isolate the issue and notify the company about a resolution when it is identified. Instead of making multiple trips to fix the problem, the ArgusON team isolates the problem from their office and enables the integrator to make a single service call.

The ArgusON system is designed around a cellular virtual private network (VPN) platform. Performance and alarm data from the solar power plant is transmitted to ArgusON via a cellular virtual private network. Currently, ArgusON has over 7,000 cellular VPNs in the U.S. in a number of industries. Because the ArgusON system has preconfigured virtual networks in place, a local Ethernet connection does not have to be breached. Wise described it as a “two-way communication path for monitoring and control.” This cellular system functions at a lower bandwidth than those used to access the Internet on a cellular phone. In addition, the system operates on fixed wireless since the units are stationary. Therefore, Wise said the cellular signal does not have any interference issues that local wireless or other networks might have.

ArgusON’s system boasts inherent security through the VPN, which means the system will only communicate back to ArgusON’s data center. If other devices try to communicate with the ArgusON system, the system simply will not respond.

While all of the ArgusON and SPX markets continue to grow, Wise said, “Solar is our fastest growing market in the remote asset management space.”

Carlo Gavazzi, an Italy-based global manufacturer of automation components, produces two systems that deliver a Microsoft-based remote monitoring package. The EOS-Array is a string-level monitoring device for calculating power production and efficiency. Rafal Pabich, product manager for Carlo Gavazzi, explained that individual PV panels are connected in series (strings) to build up voltage and power, since single PV panels do not produce much power. Then individual strings are combined yet again inside a combiner box to build up current.

“Ideally, each PV panel should be monitored separately, but this would be too expensive, so we do it on string level,” said Pabich.

The device advises a client when PV modules are not performing, are removed or not connected or if an inverter fails. Focused control on every single string provides an immediate localization of the fault, reducing service time and production downtime costs.

While the EOS-Array alerts a client if there is an error in the system, the EOS-Box is a web server that locally gathers data from hundreds of individual EOS-Arrays and puts it on the web site for the end user to analyze. Pabich said that with the combination of the EOS-Box and the EOS-Array, clients can define what is important for their operations. The product can measure power production, monitor weather conditions (wind speed, air temperature and sun irradiation), manage alarms and external loads (such as a lighting or PV washing system) and more.

In terms of online security, the EOS-Array operates on a Windows XP web server, covered by Microsoft’s security provisions. In terms of physical security, Carlo Gavazzi is developing a module for the EOS-Array called anti-theft module to help customers monitor theft of PV panels. A typical PV panel is valued at $1500-2000, and Pabich said that most solar panels are installed in remote locations without 24-hour monitoring.

Carlo Gavazzi’s anti-theft module will provide a real-time alarm when one of the panels is physically removed from the installation. If customers choose to have their control panel on 24 hours a day, they will get 24-hour anti-theft panel protection.

One company established in both wired and wireless monitoring systems for the power industry is the SKF Group. Mark McGinn, managing director of SKF’s Condition Monitoring Center in San Diego, said that many of SKF’s clients are interested in wireless systems because the cost of deployment is lower than that of wired systems. By going wireless, the installation reduces the number of cables and engineering documents that have to be filled out.

SKF’s wireless system, the SKF Multilog WMx, can also be more versatile than a wired system, capable of being installed in moving systems, as well as inaccessible or hazardous locations. The Multilog WMx is eight-channel, field mounted and communicates using industry standard 802.11b/g wireless networking. McGinn said the drawback to using this wireless system, however, is that it must be battery powered or connected to wired power. Currently, the SKF Multilog WMx “sleeps” most of the time to conserve battery power and is programmed to “wake up” at certain times. McGinn said that SKF will be releasing new products in the next 6 to 12 months that use the 802.15.4 IEEE wi-fi standard that is less “power-hungry.” One of the products will implement WirelessHART and the other will use ISA100.11a.

“These networks are more robust as they are designed for industrial use and also have lower data rates, but also lower power consumption as a trade-off allowing for longer battery life,” said McGinn.

McGinn said SKF is currently experimenting with wireless systems for solar plants. “We’re in discussions with some of the original equipment manufacturers to fit instruments.”

Until wireless systems like SKF’s are developed for solar, technology companies continue to seek monitoring solutions through wired and cellular devices. Remote monitoring and managing systems – wired or not – have become a necessity for solar companies whose plants are often in remote desert locations. “If you have a decent-sized PV plant in the middle of nowhere, how else do you get to this information?” said Carlo Gavazzi’s Rafal Pabich. Just as remote controls became a necessity of life in the 1970’s, so being able to monitor solar plants remotely is following the wave of solar growth.