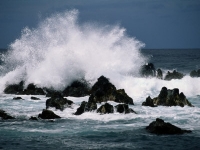 California, United States Pacific Gas and Electric Co. (PG&E) is no longer pursuing development of the Humboldt WaveConnect pilot project off the coast of Humboldt County in northern California.

In the end, costs rose above the level of expenditure that the company could justify, says Brandi Ehlers, spokesperson for PG&E. Challenges encountered in developing this project include a lack of experience with wave energy technology, which created uncertainty regarding environmental effects; the need for costly adaptive management monitoring programs; and the lack of ability to expand the proposed site from the pilot phase.

Funding for the Humboldt WaveConnect project included $1.2 million in grants from the U.S. Department of Energy (DOE) and $4.8 million in approved spending from the California Public Utilities Commission. This money was to be used to take two projects through the regulatory process.

However, PG&E estimated it would need to spend $50 million just to cover the expenses of installing the infrastructure for power transmission, monitoring, and other equipment, according to its FERC application. Operation and maintenance cost of the project was estimated at $5 million annually. This cost excludes the expense of carrying out environmental protection measures, the FERC application said.

The project was intended to operate for five years with a capacity of 5 MW. It was to be located about 3 miles off the coast, in state waters. The Federal Energy Regulatory Commission (FERC) granted a preliminary permit for Humboldt WaveConnect in March 2008. PG&E anticipated receiving the project license by June 2011. The project was to be fully decommissioned at the end of the license.

PG&E does not plan to give up on the project entirely, however. The utility will consolidate the information gathered to date, compile a lessons learned document for DOE, and evaluate characteristics of potential alternative sites, Ehlers says. A location further off the coast may provide a better opportunity for development, with fewer conflicts. This site might also offer the opportunity to expand the project to commercial scale, Ehlers says. The utility will likely be seeking a partnership arrangement before revisiting the Humboldt WaveConnect project.

However, PG&E is still studying the feasibility of the Central Coast WaveConnect project off the coast of Santa Barbara County. PG&E filed for a FERC permit in December 2009 for this site, which could have a capacity up to 100 MW. The permit was granted in May 2010.