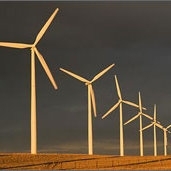 Washington, DC, United States [RenewableEnergyWorld.com] Wind turbines appear so simple – tall white sentinels cranking gracefully on the horizon. But up close, a wind turbine is an industrial workhorse. Inside the nacelle hundreds of feet off the ground, hot metal gears grind and strain as shifting winds pull and twist the long flexible blades.

At NREL, senior engineers are expanding a research partnership with operators, utilities and turbine manufacturers to determine why some key wind turbine components tend to wear too soon — sometimes within a few years of installation.

That’s a problem because wind turbines are expected to operate for 20 years. Early equipment fatigue, especially in turbine gearboxes, threatens to reduce performance and drive up wind power costs just as the industry is poised to capture a greater share of U.S. generating capacity.

Improving their reliability is key to generating a consistently competitive power source — and a healthy return on investment. Both are needed if wind power is to meet 20 percent of the nation’s electricity needs by 2030, a scenario a U.S. Department of Energy report issued last year says is possible.

“The end users and the owner-operators say we’re only getting five years, or in some cases, three years out of these gearboxes,” said NREL principal engineer Sandy Butterfield, who is leading the cooperative study.

Newer turbine designs may work, but without the NREL study it will take a number of operating years in the field to prove that the reliability problems have been resolved. (In the image left, NREL senior engineer Shuangwen Sheng inspects the monitoring system for the long-term gearbox reliability study at the National Wind Technology Center. Photo credit: Joseph B. Verrengia)

“This project is designed to search for any residual gaps in the design process and confirm a robust design practice used in current production turbines,” Butterfield said. “We can’t wait five more years to discover any residual gaps.”

The project identifies equipment failures that are common throughout the industry and targets deficiencies in the design process that are contributing to these problems.

At the same time, the participants are expected to openly examine turbine problems and question every assumption of the design process.

Focusing on design is especially important, Butterfield said, because the expanding wind industry is trying to rapidly meet market demand for new and larger-capacity turbines. Designers and manufacturers are all following very stringent design quality, in some cases matching aircraft tolerances. Yet the problems persist. This implies the design standards are missing some critical loads or conditions that are unique to wind turbines. Without identifying the fundamental issues behind previous failures, he said, the same flaws could find their ways into new generations of turbines.

The tests at the National Wind Technology Center focus on several aspects of gearbox performance.

Initially, the gearboxes under review are being tested on the NWTC dynamometer, where Butterfield and others will simulate a variety of loads and measure the results.

(The image left shows the gearbox of a large commercial wind turbine instrumented for testing at the National Wind Technology Center. Photo credit: Joseph B. Verrengia)

Later, they will put one gearbox into test turbines at the Xcel Energy Ponnequin wind farm and monitor them under real load conditions.

“I know we’ll discover a tremendous amount in the first year,” he said. “We hope we can quickly transfer this experience to the industry.”