The Faculty of Physics at the University of Barcelona (UB) has developed an innovative wind prospecting system designed to be used in marine environments. The project is based on a hot air balloon which has a module with meteorological sensors and other positioning systems that detect wind strength and direction at all times, regardless of the position of the balloon. 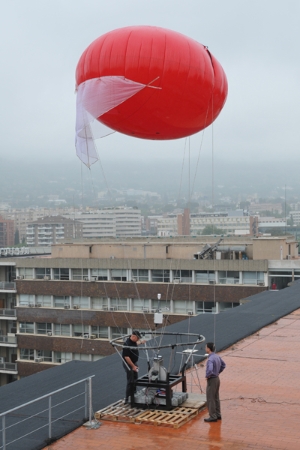 The prototype, which was coordinated by lecturer Bernat Codina from the Department of Astronomy and Meteorology and developed by Andriy Lyasota, a Russian aeronautical engineer, allows sending data through a Wi-Fi connection to the monitoring and recording unit located on land. The sensors module also has position and anti-collision lights that allow keeping the balloon suspended in the air permanently.

The prototype balloon is three meters long and its shape is similar to a saddled seabream. Thanks to this design it can withstand winds of up to 150 km/h and reach a height of 150 meters by means of a cable that holds 600 kilos. Researchers from UB created a real prototype of the system in the first phase of the project, and the first flight and data collection tests have been very promising. Lecturer Bernat Codina explains its characteristics: “Current technology has allowed us to recover the idea of using a hot air balloon in which we have incorporated a team of sensors that in total weighs four kilos.”

In the future, researchers forsee that wind energy will be developed mainly in marine environments. Hitherto, previous studies to identify suitable sites have installed meteorological towers or other measurement systems on maritime platforms which require large investments. The balloon system proposed by UB would be installed on a floating buoy, which would significantly reduce costs.

On the other hand, as Andriy Lyasota points out, “this system would minimize the environmental impact on the seabed as it does not require any construction at all.” However, the expert concludes that “some technological challenges must be solved, for example, we must ensure that it can last up to a year in extreme conditions,” so that it can be used for wind prospecting.

Bibiana Bonmatí (Barcelona, 1973) is currently scientific editor at the Communication Unit of the University of Barcelona (UB) where she disseminates research topics in physics, chemistry, environment, astronomy, medicine, etc. She holds a degree in Physics (UB) and a Master’s degree in Science Communication (Pompeu Fabra University, Barcelona). She has been working in science communication and organization of outreach activities for 15 years. Now she also chairs two readers clubs on science and literature at public libraries in Barcelona.