Wind Energy’s New Role in Supplying the World’s Energy: What Role will Structural Health Monitoring Play?, a new study from researchers at the Department of Energy’s National Renewable Energy Laboratory about the technical aspects of making wind projects work better, is a concrete demonstration of how New Energy gets its jobs advantage.

What it comes down to is this: The fossil fuel industries have to get the fossils they burn from the earth. They have automated the dirty and expensive processes so as to eliminate as much of the costly human components as possible.

As demonstrated in studies like Many Shades of Green, Creating Opportunity… and, most significantly, Greenpeace’s working for the climate, the New Energies use the richness of human resources to draw on the gifts of the natural environment. In doing so, they put people to work and nurture the innovation needed to better receive the gift of earth’s powers. ::continue:: 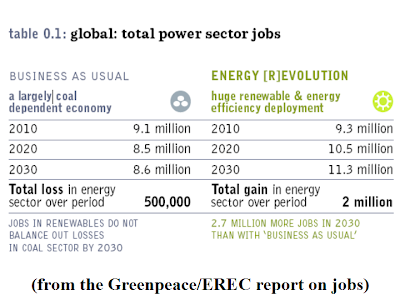 In their paper, the NREL researchers explain how the wind industry has in recent years matured and become able to provide a growing proportion of the human community’s electricity demand. While wind is still only about 2% of the U.S. power mix, it has been a third or more of all NEW power built in the U.S. for the last 3 years and the second biggest source of new U.S. electricity generation for the last 5 years. The U.S. Department of Energy (DOE) concluded in 2008 that wind could readily supply 20% of the nation’s power and a recent study of the transmission system for the Eastern half of the country suggested wind could provide even more.

In Denmark, wind is already supplying a quarter of the electricity and it is 8% of the total power mix in Spain and Germany. At several times during recent months, wind was producing more than HALF of Spain’s daily electricity.

The ability of wind projects’ to do their yeomanly work rests on what wind engineers call the “structural health” of the turbines. The building, monitoring and maintaining of structural health is done by human beings. As wind producers’ capacity grows, the need for human beings to build, watch and keep the hardware running effectively and efficiently grows, putting more and more people into quality blue collar maintenance technician and support jobs.

2 important unanswered questions could significantly increase project efficiency: (1) Can condition monitoring systems analyze the raw turbine data and correlate it with wind conditions to anticipate premature damage? (2) Can the systems adapt the turbine to the destructive conditions and extend the life of vulnerable turbine components?

A final question the NREL paper only hints at is this: Are high-quality manufacturing and skilled and sensitively performed maintenance, done by highly competent, well-compensated blue collar workers, as much the key to turbine performance as innovative information technology monitoring systems? 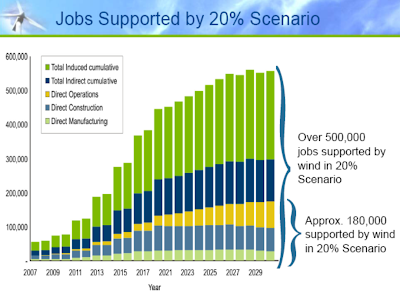