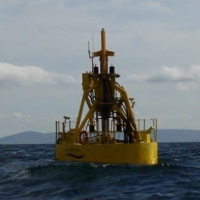 California, United States — Drawing power from the churning sea can seem as difficult as finding Kraken the mythical sea monster. Despite tales of successful trials and imminent commercialization, the wave power industry remains largely in the research and development stages. But a utility-backed project in California could help propel this class of technology into a reliable supply of energy.

“Studying wave energy is important for California’s future,” Morris said. “Renewable and clean energy is not only what our customers want but it’s the [best] thing for the environment.”

The utility’s involvement is a big boost for wave power technology developers, many of whom have struggled to overcome technical problems or raise enough capital for their projects. Scotland-based Pelamis Wave Power suffered a major setback when its devices stopped working off the coast of Portugal in late 2008, and the company saw the departure of its CEO last year. Canada-based Finavera Renewables surrendered its federal license to build a project off the state of Washington last year, citing a difficulty in finding financing.

Finavera’s license has been the only license issued by FERC, according to the agency’s website. FERC has issued 10 permits for studying the feasibility of building wave power farms in the country, all of them located in the Pacific Ocean. The agency has one pending permit application for a project off Oregon’s coast.

PG&E’s effort is “a wonderful thing for the industry because they are leading the way to get all the permits and regulatory approval to get that done. That’s a daunting task,” said Bill Staby, CEO of Resolute Marine Energy, a Massachusetts-based startup.

PG&E has long showed a strong interest in wave power and at one point was poised to buy this type of electricity from what would’ve been the first wave energy project in California. The project, also proposed by Finavera, sank when the California Public Utilities Commission said no to the power purchase agreement in October 2008. The CPUC said the technology was too unproven and costly.

Since then, PG&E has stepped up efforts to explore wave power projects on its own. It has $1.2 million in grants from the U.S. Department of Energy and $4.8 million in approved spending from the CPUC to take two projects through the regulatory processes, Morris said.

Aside from the Humboldt project, PG&E also is looking at developing a wave farm off Santa Barbara. The utility filed for a FERC permit last December to conduct a feasibility study and see if it’s suitable for a project up to 100 MW in generation capacity.

Obtaining the license for the Humboldt project won’t be a breeze, however. The utility still has to carry out an environmental study to figure out what monitoring and other measures are necessary to protect the marine resources. PG&E also is facing opposition from some of the local fishermen who have hired an attorney to negotiate compensations for financial losses that might be incurred by the wave farm operation.

How Much Will It Cost?

What PG&E and the tech developers it picks also will have to figure out are the costs of constructing and operating a 5-MW wave energy power station. PG&E estimates that it would need to spend $50 million just to cover the expenses of installing the infrastructure for power transmission, monitoring and other equipment, according to its FERC application. The figure doesn’t include the cost of the wave energy converters, which make use of the wave motion to run a motor that in turn drives a turbine for electricity generation.

The operation and maintenance cost of the project is likely to be $5 million annually, though this figure excludes the cost of carrying out environmental protection measures, the filing said. The utility is still figuring out what those measures should be.

Company executives and analysts say wave power won’t be cheap without large-scale deployment, but it could be competitive against other types of renewable energy. Waves have higher energy density compared to other renewable sources such as wind, so a wave power farm could produce more electricity more consistently and with a smaller footprint, said Paul Jacobson, the ocean energy leader and senior project manager at the Electric Power Research Institute (EPRI).

Estimates for the cost of producing wave power range widely. A 2007 study by EPRI shows that a wave power farm in the United States that could generate 300,000 MWH per year is likely to see production costs of range from roughly $0.11-$0.39 per kWh, depending on its location.

The industry also uses government-set wave power feed-in tariffs (FITs) as benchmarks, said Derek Robertson, head of the U.S. operations of Wavebob, based in Ireland. Several European countries have FITs for wave power. Ireland, for one, is requiring utilities to pay 22 euro cents [US $ 0.29] per kWh, Robertson said.

Other countries, including the United Kingdom, Portugal and Spain, are offering FITs of up to US $0.34/kWh.

Israel-bases SDE claims that its systems could produce power for much less than those figures. In late April, the company completed construction of a 1-MW wave power plant off the coast of China, the first commercial project for the company, according to Inna Braverman, SDE’s international marketing manager.

The project, located off the coast of Dong Ping in the Guangzhou Province, cost $650,000, to build, she said. The electricity generation cost would reach merely US $0.02 per kWh said Braverman, who declined to disclose the financial arrangements of the project or the materials used to build the equipment.

“Our system is very simple and easy to implement and it’s fully automated,” she said.

PG&E expects FERC to issue a license of its pilot project in California by June 2011, Morris said.  Aside from FERC, several state agencies will get to review the project, including the Coastal Commission and the Department of Fish and Game.

Scrutiny won’t only come from regulatory agencies. Already, the utility is facing opposition from local fishermen who want PG&E to compensate them for any loss of crab fishing gear and provide assurance that the waters around the wave farm would be safe to navigate. Crab pots, though weighed down, are known to drift and could become difficult to retrieve, said Kevin Pinto, a local fisherman.

The fishermen also question whether the pilot project would last longer than the proposed five years in order to generate a good return on the investment.

“The area of concern is right in the middle of some heavily fished Dungeness crab ground, and we were quite concerned if the project is going to grow in length,” Pinto said. “The vessels that service the (wave energy converters) could run over the crab boats. Safety is our largest priority.”

Ucilia Wang is a California-based freelance writer who covers renewable energy technologies and policies. She was the associate editor at Greentech Media.