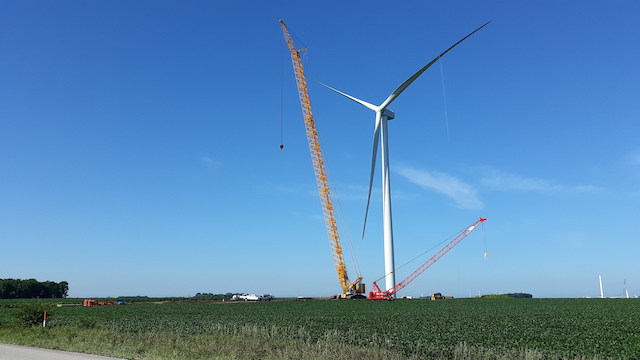 After a 23-year wind farm construction hiatus, work on a 2nd Cherokee County wind farm has begun. Developed by San Diego based EDF Renewables, the 200-megawatt (MW) Glaciers Edge Wind Project north of Marcus is scheduled to be on line by the end of 2019.

In the summer of 2015, Darrell Downs, Marcus Area Economic Development Director and Mark Buschkamp, previous Cherokee Area Economic Develop Director wanted to secure a large commercial-scale wind farm. They reported that they’d met with or contacted several wind energy developers to determine which one was the right fit.  They settled on EDF Renewable Energy as the wind energy developer to work with Marcus area landowners.

As the 300-MW Upland Prairie Wind Farm near Everly, Iowa finished up this spring, Indiana based White Construction Company crews moved into the Marcus area and geared up to build the approximately 30,500-acre Glaciers Edge project.

Glaciers Edge gets its name from the polar Ice Age glaciers that inched south across the North American Continent tens of thousands of years ago, gouging out the land as it crept along. Cherokee County Auditor Kris Glienke said the Buffalo Ridge was another name under consideration. You can just track were the Buffalo Ridge lays, she said.

“Well, that’s how Pilot Rock supposedly got here was because it was pushed along by the glaciers,” County Assessor Greg Zarr noted. “It’s interesting when you think of it that way.”

Even Google played a pivotal role in bringing this wind farm into Cherokee County. A Nov. 30, 2017 EDF press release reported, “EDF Renewables has signed an agreement to supply Google with 200 MW of wind energy generated from the Glaciers Edge Wind Project in Iowa.”

Dai Owen, Director of Power Marketing for EDF said in the news release, “The strong U.S. wind market relies in part on America’s corporate sector and companies like Google, who through the purchase of wind energy demonstrate leadership in the drive for a low-carbon economy. Their commitment allows Glaciers Edge to proceed.”

“Renewables from projects like Glaciers Edge bring value to our business as we scale and accelerate investment in the communities where we operate,” said Gary Demasi, Google’s director of global infrastructure. “With solar and wind declining dramatically in cost and propelling significant employment growth, the transition to clean energy is driving unprecedented economic opportunity and doing so faster than we ever anticipated.”

Another major factor for bringing this project to fruition happened on August 1, 2018 when EDF announced that Netherlands based PGGM Infrastructure Fund acquired a 50% ownership stake in the Glaciers Edge Wind Project. EDF will remain a 50% co-owner and provide management as well as operations and maintenance services.

PGGM is a Dutch pension investor and we manage the pension money of 2.8 million Dutch health care workers. It consists of investments in listed companies, many of them listed in the US, and private investments. The stake you refer to is a 50 percent stake in several solar parks and wind farms in different states in the US, next to EDF Renewables, who develops the parks. The Glaciers Edge Wind project is one of those.

PGGM has a considerable portfolio of investments in sustainable energy generation, both in the US and in Europe. It generates the kind of returns our participants like: a stable, long-term financial return combined with social returns, i.e. sustainable energy which contributes to solving the global warming problem. PGGM thinks that big institutional investors can make a positive impact on the world because they allocate large amounts of money. So, our stake in the Glaciers Edge Wind Project can be seen in the wider context of investing capital to pay out sufficient pensions and contribute to a livable world at the same time.

“As to the connection timeline, we expect that our interconnection substation will be online on or before mid-September,” Greenwood saidl.

Glienke said, “When this project was first discussed on June 21, 2016, the Board of Supervisors had Speer Financial, Inc. come in to discuss the potential value of the project, taxation potential and whether the county might want to put part of the project in a Tax Increment Finance district (TIF) to finance road improvements. The supervisors decided not to TIF the project at this point.”

“I took Speer’s estimate and multiplied it out by the current county-wide levy rate and then estimated what the project would generate in property tax revenue over a 20-year period to 2042,” Glienke reported. “That came to well over $10,000,000 in property taxes paid into the county.”

Glienke then compared her figures with the current top four tax paying entities in Cherokee County. When the wind farm is fully assessed at 30% in 2028, for example, the property tax revenue could approach $588,690 per year through 2042.

Glienke looked into the existing number of wind turbines that were built over two decades ago on the east side of Cherokee County. All of these sites are within a mile or two of the Buena Vista/Cherokee County line. These are near the old Enron Wind Farm of the 1990s.

“They were built back in 1996 and 1997. These are the original open-framed, lattice-framed towers,” said Glienke.

“Up in Spring Township, we have a few,” Zarr added. “And down in Pitcher Township, we’ve also got some more.”

When asked if Glaciers Edge will be the largest wind farm in Cherokee County once its commissioned, Zarr quickly replied, “Oh, yes. Even after 22 years, they still generate electricity.”

Loren Flaugh is a freelance writer who grew up on a small northwest Iowa farm in the 1950s and 1960s. He enlisted in the US Navy Seabees, served in Vietnam in 1968 and then began a 20-year career working in just about every aspect of the petroleum industry. He was employed by Dresser Engineering and Construction Company, a Tulsa, Oklahoma company, for 11 of those years. He was trained as a high voltage power and low voltage control electrician and supervisor on numerous and complex projects in oil refineries, natural gas liquids hydrocarbon fractionation facilities and many major pipeline systems.

In 1988, Flaugh began writing irregularly for the Wichita newspaper and weekly for the El Dorado Times at El Dorado, Kansas. After taking a couple of semesters of community journalism classes at a community college, he began writing much more often. Today he mainly enjoys writing about most any kind of energy matter, though he frequently writes on other topics as well.

Wind Power project development is an educational topic at POWERGEN International. Check out what’s in store for the New Orleans event, which takes place November 19-21, 2019.

‘There’s a gap’: A cybersecurity expert’s advice for renewable energy