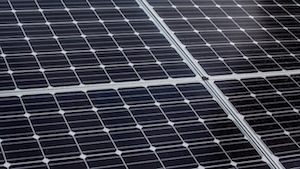 In part one of this article (India Solar Tariffs – Irrational or Misunderstood?), I argued that the current low solar tariffs in India are not necessarily irrational, and nor are they likely to render solar projects unviable.

I had concluded that concerns on this matter seemed overblown and appeared to stem from a misplaced perception of what solar returns needed to be due to an overestimation of risks, most probably a bias that crept in as a result of the experiences of some recent additions to thermal capacity which were fundamentally flawed at conception itself. Even when comparing operational capacity, solar pretty much has zero risk below the top line whereas risk and uncertainty with thermal continues to flow a long way down in its P&L statement. Furthermore, there also appears to be some confusion on the concept of returns itself specifically pertaining to internal rate of return (IRR), which could do with some clarification.

Any analysis of solar returns therefore has to be first de-linked from return expectations for thermal. Rather than chip away at a thermal derived returns benchmark, return expectations need to be assessed from the perspective of what I like to call a “natural floor,” for only if they pierce it do they really drift into irrational territory. But more about this natural floor business later, as it’s worthwhile to spend a moment on IRR first.

Pitting IRR against sponsor cost of capital or some other fixed hurdle rate is the shortest route to a portfolio of value destroying assets, missed investment opportunities, or both

IRR is really not a return figure in the classic sense. It is actually the discount rate that equates the sum of the present value of future cash flows available to the equity investor with the up-front equity investment. A high IRR on equity doesn’t necessarily mean a project merits investment, just like a low IRR on equity by itself doesn’t necessarily signal lousy economics. The decision to invest (or not) should only be taken by comparing IRR with the project’s (not sponsors) separately calculated cost of equity which is the correct hurdle rate. One should proceed with an investment only if the IRR on equity exceeds this hurdle rate, which can be the case at both high or low absolute IRR levels.

On the other hand, pitting IRR against sponsor cost of capital or some other fixed hurdle rate during the investment decision process is the shortest route to a portfolio of value destroying assets, or missed investment opportunities, or both. This is also the reason why the belief that low cost of foreign sponsor equity capital is driving down solar tariffs in India is just a red herring.

But the short answer to this question of stability is that while cash flows to equity are predictable, they are not necessarily flat. This is because of the interplay between cash payments to service interest and principal as well as the fact that whilst the former is tax deductible, the latter is not. And note that even in cases where accelerated depreciation benefit is being sought the project company remains exposed to c.20 percent MAT as per the Income Tax Act.

By way of example, take the case of a project loan where principal repayments are structured in the most simplistic manner as equated yearly installments. The resulting curve representing annual cash flows available to equity holders is still not flat and in fact, slopes gently upwards in the beginning, then rises steeply until it flattens out once the project loan has been repaid.

One can introduce further elements of complexity here given dividend distribution tax and mitigation of the same under an InvIT umbrella, but this opens up a whole new dimension to project loan structuring which can be addressed in a separate piece on financial optimization and modeling for solar. Suffice it to conclude at this point that absolute yearly cash flow to equity holders is very predictable but not necessarily flat, IRR is not really a return figure, and more importantly, IRR by itself does not provide sufficient guidance on rationality of solar tariffs in the absence of an independent assessment of each project’s cost of equity.

So how should one tackle cost of equity? The theoretical Capital Asset Pricing Model (CAPM) based approach certainly provides some guidance. For solar there appears to be another approach involving the “natural floors” I referred to at the outset of this article, and a good way to explore this is to take the example of a newly operational solar project with off-take by NTPC (via its wholly owned trading subsidiary NVVN).

The natural floors for equity returns for solar are yields on comparable off-taker debt commitments and cost of project debt itself, for only if returns pierce any one do they drift into irrational territory

How much should one pay for such a project, or in other words, at what implied IRR should one acquire the project? The answer to this question first requires an appreciation of what the underlying cash flows of such a project really represent. The way I view it, an equity investor is buying into nothing but a long-term commitment by NTPC to pay out predictable (but not necessarily flat) cash payments at specified intervals.

Sound’s a lot like a bond doesn’t it? And that means there is a market determined benchmark price that an investor demands for such a commitment by NTPC which further translates into an implied return expectation in the form of yield. This represents the first of the two natural floors. Only a tariff which translates to an IRR to equity below off-taker bond yield can truly be considered irrational as one would be better off just buying the bond in such a case.

There is however another natural floor above yield, and that’s the cost of project debt. An equity investment is junior to debt, and the latter also benefits from added security by way of charges over project assets. In the case of this second natural floor, only a tariff which translates into an IRR below the returns on debt would truly qualify as being irrational, as the equity investor would be better off simply lending to the project in that case.

A closer look at cost of borrowing throws up some interesting comparisons. Take the example of NTPC’s INR 2,000 cr (approx US$300 million) 5 Yr Masala Bond issue which has just listed for trade on LSE. Assuming it priced at face value results in a yield of 7.25 percent on the bond, which is markedly below SBI’s 3 Yr MCLR. And the MCLR itself is further subject to a spread; let’s say 200bps for illustrative purposes to make for all in borrowing cost in excess of 10 percent for solar project debt. As Fig 1 depicts, this results in a pretty wide gap between the off-taker going direct to the debt capital markets and the developer raising solar project debt from a bank — for essentially similar underlying risk, i.e., NTPC sticking to its commitment to pay out pre-determined amounts of money at periodic intervals. 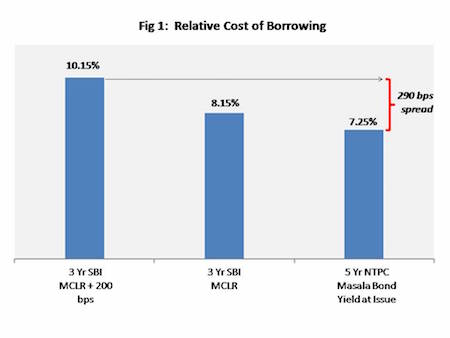 The above analysis requires a few qualifications. Execution risk would need to be priced in to any analysis during the tariff bidding stage, but it is nowhere near the same league as for thermal. Return expectations also need to factor in concerns on sanctity of off-take commitments which authorities appear to be making moves to further strengthen even as this piece is being written. The question therefore is how much of a premium is required to be added on to the natural floors at the time of initial tariff bidding to address these two concerns, and in my estimation the answer is nowhere near the levels that skeptics seem to figure.

In a nutshell, higher tariffs and returns are great if one can secure them, but in a highly competitive marketplace like solar with minimal barriers to entry, outsized returns are bound to be bid away by investors who are able to recognize cash flows for what they really represent. In fact, I believe that independent of further reductions in module costs and efficiency there is room yet for solar tariffs to fall further simply as a result of streamlining in borrowing costs as depicted in Figure 1. Not to mention still even further upside which can be had under an InvIT umbrella both from a tax efficiency and structuring perspective.

In closing, it seems to me that those who continue to search for solar returns whilst donning their thermal glasses are setting themselves up to sit on the sidelines while the rest of us make a once in a generation shift in our journey on the road leading to affordable energy security for all.

This article was originally published by the author on LinkedIn and was republished with permission.