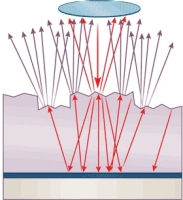 This article is based on material presented at the 18th International Photovoltaic Science and Engineering Conference (PVSEC) in Kolkata, India, on 19 January 2009.

This article is based on material presented at the 18th International Photovoltaic Science and Engineering Conference (PVSEC) in Kolkata, India, on 19 January 2009.

Today, measurements in thin film PV processes are mainly performed off-line and not on each batch. A new in-line monitoring system that is capable of monitoring the film thickness of all layers throughout the solar cell manufacturing process has been developed [1]. The new technology will help thin film PV producers control their production on-line, enhancing yield. Additionally, it will accelerate development cycles and help to transfer and ramp up established processes to new lines.

Reflectance measurements have already proven their strength in ex situ characterization of film thicknesses as well as in in situ and end-point detection applications for many semiconductor applications. Going forward, with respect to comprehensive process control and effective process development, an in-line monitoring sensor system capable of on-line film thickness measurements of all layers (transparent conducting oxide [TCO], absorber and buffer layers) throughout the thin-film PV process will make a real difference.

The main challenge that had to be tackled was to obtain an accurate film thickness measurement despite the reduced reflectance due to the rough absorber layers. Absorber layers (e.g., CdTe or copper indium gallium selenide [CIGS] materials) are intentionally grown to be very rough in order to trap the sunlight in the cells, thereby enhancing the efficiency of the final solar cell. Reflectance measurements, on the other hand, usually work perfectly for smooth layers and interfaces.

When measuring reflectance on rough absorber layers in order to detect the film-thickness of the CdS layer on top, the situation is much more challenging due to stray light effects (Fig. 1). LayTec has found a way to establish film-thickness measurements under these challenging conditions [1]. With a newly developed optical set-up, data from both transparent and metalized thin film PV cells (with CIGS or CdTe absorbers) was measured.

Figure 2 shows typical reflectance spectra from a CIGS solar cell process. Reflectance measurements after each deposition step (indicated by the optical head in the sketch on top of the layer stack) allow a thickness determination for each layer in the whole process. The position and number of interference fringes measured by the interferometer is automatically analyzed in order to determine the film thickness.

While the TCO and CdS film thicknesses can be detected with a spectrometer operating in the visible to near-infrared spectral range (500?1000nm), a determination of the film thickness of the absorber requires an infrared reflectance measurement, as these materials completely absorb (and that is their purpose in the PV cell) visible light.

The accuracy of the measurement is in the range of 1% for the absorber, and 2% for the TCO layer, respectively. The determination of the CdS layers however is more challenging, as these layers are thin and grown directly on the rough absorber layer. It is therefore very important for the accuracy of the method that the absorber layer reflectance spectra are also taken into the measurement from the same process, because any change in the material composition or morphology has an influence on the final spectral reflectance of the CIGS and CIGS plus CdS spectra. Reflectance spectra are thus detected prior to, and after each, layer deposition. By an automated fitting of these two reflectance spectra, the film thickness control of each layer can be established. The accuracy of the measurement depends on the total thickness and the knowledge of the optical properties (n and k values) of the underlaying layers in a multi-layer process. These on-line measurements not only yield precise layer thickness, but also information about the morphology, interdiffusion, and conductivity characteristics online.

The specular reflectance method is suitable for on-line film thickness measurements on all layers. A new in-line sensor system for complete control has been introduced for both in-line and roll-to-roll processes.

Elisabeth Steimetz obtained a PhD at the Technical U. Berlin. She is director of sales and marketing at LayTec GmbH, Berlin, Germany; info@laytec.de; www.laytec.de.

Steffen Uredat obtained his diploma and PhD degree in chemistry at the Technical U. Berlin, Germany, and is manager of product development at LayTec GmbH.

Thomas Zettler obtained his PhD degree in physics at the Humboldt U. Berlin. He is a co-founder of LayTec GmbH and its president.