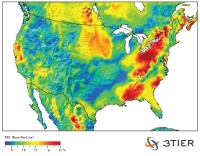 London, UK — Securing financing in the wind power industry has always been tied to the viability of wind resource at a given location. Developers collect data on site and over varying lengths of time. If the numbers look good, a project moves ahead to find the financing.

Now, two companies have teamed up to perhaps provide a different way to hedge the financial risk of wind variability. Last May, renewable energy risk analysis company 3TIER and weather risk management outfit Galileo announced the launch of WindLock, a financial product that functions like insurance – though it is often purchased as a derivative – in that the buyer pays an upfront premium and receives a payment from Galileo to the extent that wind-driven production falls below a predefined level. Galileo uses 3TIER’s wind resource time-series data to price and structure the product based on expected variability – with settlements based on wind speeds provided by 3TIER.

So, how has the product been received by the financial industry – and can it, and products like it, ever replace the need for real-time on-site data collection?

According to Windlock, there have been two applications that have been commonly requested by clients. The first is protection designed to guarantee that the developer can meet debt-service – usually struck at around 99 percent of annual production to correspond to traditional debt-to-equity ratios. The second is protection designed to allow for more leverage in a project, usually struck at around 80 percent of annual production, where Malinow says the increased interest payments and WindLock premium are offset by higher returns and the ability for a developer to diversify its equity across a portfolio of projects.

Dr. Audun Botterud, Energy Systems Engineer in the Center for Energy, Environmental and Economic Systems Analysis at Argonne National Laboratory in Illinois, predicts that, if priced correctly, these sorts of financial instruments can play an important role in mitigating risk for wind energy developers.

“Power Purchasing Agreements typically hedge developers against electricity price volatility today, but they are still facing quantity and volume risks.  Financial products that can be used to hedge against wind power variability can therefore contribute to further reduce the overall risk exposure of wind power projects,” he says.

Mike Whitaker, Commercial Lender at Plano, Texas-based Unique Capital, a capital advisor for renewable energy projects, agrees, predicting that, unless the cost is prohibitive, developers and investors will take advantage of this tool.

“The term of the instrument would probably need to match the debt, which would be difficult if there is long-term debt attached to the project. Aside from mitigating risk for the investor, I would assume it could also reduce the cost of capital to the project,” he adds.

While WindLock is a new product to the wind industry, Martin Malinow, CEO at Galileo, argues that its foundation is rooted in traditional weather risk management, which he says has become an accepted practice for traditional gas and power companies on a global basis over the past dozen years.

One Size Fits All?

So, should banks and financiers provide financing for projects based on this type of software analysis alone? For Botterud, although products of this type represent another useful tool in a developer’s armory, it is still important to collect “real” on-site data.

“I’m not in a position to predict the reactions of banks and financiers.  However, although these types of products can contribute to reduced risk levels, I think the lenders will still want to see some real measurements from prospective wind sites and not rely entirely on model-based data and hedging products,” he says.

Meanwhile, Whitaker argues that it’s hard to assume that every pre-requisite of a wind farm, such as permits, environmental requirements, interconnections and so on, would be in place prior to having a sufficient amount of real-site wind data collected.

“With this said, I don’t believe it would necessarily replace the significance of on-site wind data and wind studies to support a project. It would highly depend on the backing and the terms of the instrument. The benefits would need to be examined in more detail,” he adds.

According to Malinow, the future of the wind industry will hinge on the ability of developers and equity providers to secure affordable financing while allocating their capital efficiently across a portfolio of high quality projects. In this light, he believes that, beyond equity, tax equity and debt, the type of protection afforded by products like WindLock will play an increasingly important role.

“At its essence, WindLock operates akin to financial guarantee insurance, albeit indexed to wind-driven production – one of the largest sources of cash flow variability a project faces – in that it makes the project whole to the extent the wind underperforms over a given period,” he says.

Michael Grundmeyer, VP of Business Development at 3TIER – Galilieo’s partner in the WindLock venture – argues that it’s important have the risks, such as volumetric wind production risk, identified and quantified.

“[T]o the extent that getting protection from that risk can improve the financial viability of projects, I think it’s critical,” he says. “If you can increase your debt capacity, shrink reserve accounts, and enhance returns, investors will have a larger appetite for wind deals, especially in the face of reductions in incentives.”

Other observers are more guarded in their assessment. For instance, Whitaker understands that many of the consultants who perform wind studies have adjusted their calculations to help reduce the chance of failure related to outputs.

“Unless future flaws in wind studies are uncovered or wind flows change dramatically due to climate changes, I’m not sure if the product is a necessity in this industry.  [However], I do believe that if it’s not cost prohibitive and if it even improves the returns and reduces risk for investors and lenders, it’s a tool that will be taken advantage of,” he argues.

“If a liquid market develops for such products, where wind power variability risks can be hedged at a reasonable cost, I think they can contribute to further expansion of wind power by lowering overall project risks and financing costs for wind developers,” adds Botterud.