London, UK [RenewableEnergyWorld.com] In many countries heat pumps are experiencing renewed popularity. Although heat pumps have been used to heat buildings for more than 50 years, the technology first boomed in the 1980s and since then, much has changed. Today the technology is very advanced and modern heat pumps matched to the heating demand and equipped with efficient controls can offer both economical as well as environmental advantages over a system supplied by fossil fuels. 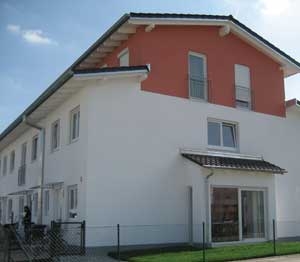 In comparison to conventional technologies, the heat pump is a much-debated technology with respect to its primary energy consumption and impact on the climate; some aspects of air-to-water heat pumps are environmentally controversial. Nonetheless, the increasing number of heat pump systems sold for use in new and existing buildings indicates the rising popularity of this technology.

In a bid to resolve the issue of whether heat pumps are a sustainable alternative to fossil fuels, under the direction of the Fraunhofer ISE, two large field tests of newly installed heat pumps were started in 2006. In each project, measurements of a large number of heat pumps were carried out under real operating conditions in single and multi-family dwellings.

Within the ‘heat pump efficiency’ monitoring project, the efficiency of modern heat pumps in buildings of contemporary standards was studied. Heat pumps installed in very efficient low energy houses, with a yearly heating load of 20-50 kWh/m2 – equivalent to 2–5 litres of heating oil per m2 – are examined from an optimization point of view.

However, considering existing buildings built before 1980 are responsible for 90% of the total heating energy consumed in Germany, their energy savings potential is far larger than that of modern high-efficiency structures. The efficiency of heat pumps in un-retrofitted or partly retrofitted houses was assessed in a parallel project ‘Replacement of central oil-boilers with heat pumps in existing buildings.’

The subject of this project is heat pumps with a small output capacity of 5–10 kW thermal, with outdoor air (air-to-water HP), earth (ground-to-water HP) and groundwater (water-to-water HP) heat sources. Currently, the study deals with more then 100 heat pump units provided by seven producers. The aim of the project is to assess their efficiency under varying operating conditions and in different system configurations, and the results will be used to aid in further developing concepts for using small-capacity heat pumps in newly built Low Energy Houses (KfW-40, KfW-60 and 3-Litre-Houses). Additionally, the loss of the refrigerant agent under real conditions was examined in some of the units over a period of four years.

The project is funded by the federal German Ministry of Economics and Technology and seven producers, as well as by the utility companies EnBW and E.ON. The heat pumps assessed in the projects are from a wide range of suppliers including: Alpha-InnoTec, Bosch Thermotechnik, Hautec, NIBE, Stiebel Eltron, Vaillant and Viessmann.

In this second project, the performance of 75 heat pump units from major producers were measured under real operating conditions. Due to their high supply flow temperatures, these heat pumps are particularly suitable for the use in older buildings. Here the focus was on comparing heat pump systems with alternative central oil-heating boilers with respect to the economics and greenhouse gas emissions. The project was commissioned by E.ON Energie AG, although the results will be made widely available.

The general aim of the field tests was to assess the boundaries of heating-energy consumption and insulation standards with respect to heat pump operation in a bid to answer the question: up to what level is the use of a heat pump economically reasonable and beneficial for the environment? Among other things, the study attempted to determine the minimum requirements to be met by the building envelope and the heat distribution system. From both an economic and environmental point of view, the use of a heat pump will be compared with a central oil heating boiler. In particular, the Institute will define prerequisites for an optimal sizing and placement of heating bodies. The heat pumps were run with a supply temperature of 55°C, though most of the selected heat pumps are approved to supply temperatures of up to 65°C, leaving room for norm-deviating user behaviour such as higher room temperatures. On particularly cold days temperatures above 55°C do not need to be provided by an electric heater but rather can be achieved by a heat pump.

Within the Heat Pump Efficiency Project, 68 of the assessed heat pumps use the ground as heat source. In addition, approximately 70% of the systems use bore holes and 30% use ground collectors. Air was used as the heat source in 26 systems. The remaining seven systems (9%) are water-to-water heat pumps. 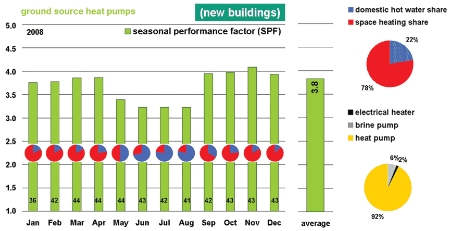 Considering the heat distribution system, the predominance of the favoured system is evident as 92 systems (93%) are equipped with a floor heating and only nine use either only radiators or radiators in combination with floor heating (combined systems).

In the ‘Heat Pumps in Existing Buildings’ project, 38 of the assessed heat pumps used the ground, 35 used air, and two used water as their heat source. Radiators are used as the heat distribution system for 97% of the units used. This fact determines the higher system inlet temperatures of the heating system than in case of floor heating. The average floor space in bothof these projects amounts to approximately 190 m2. Figure 3 and 4, represent the distribution and effiiency of the heat sources and the heat distribution systems in both new and existing systems. 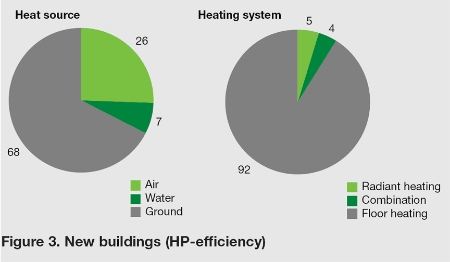 There are primarily two factors to describe the efficiency of heat pumps. First, the coefficient of performance (COP) is determined in the test stand with standard conditions for a certain operating point and/or for a number of typical operating points. Second, the seasonal performance factor (SPF), describes the efficiency of the heat pump system under real conditions during a certain period, for example for one year. It should be noted the SPF does not describe all aspects of heat pumps and therefore their evaluation may not be reduced exclusively to the seasonal performance factors. 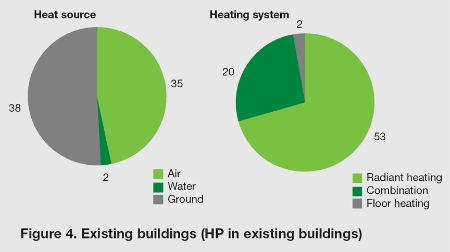 The SPF for individual months and an average value for the year 2008 for ground source heat pumps is shown above in Figures 1 and 2. The share of the produced heat energy of the heat pump in space heating operation and domestic hot water operation is shown in the top right corner for the whole year and on the each bar for every month. The share of the electrical energy use of the heat pump, electrical back-up heater and brine pump is shown at the bottom right corner. The numbers in the bars indicate the number of analysed heat pumps for each month. For example the average value from December includes 43 heat pump systems.

The assessment of the 2008 measurement data for ground-source heat pumps in the new buildings project providing both heating and domestic hot water supply reveals a seasonal performance factor (SPF) of 3.8. The SPF of the individual system was in the range of 3.0–4.6. The share of the produced heat energy in domestic hot water operation with supply temperatures about 52°C was 22% and 78% for the space heating operation, with supply temperatures in the range 32°C–45°C. The share of the electrical energy use of the heat pump was 92%, for the brine pump it was 6% and the back-up electrical heater 2%. The back-up electrical heater was significantly active in only six of the systems analysed and in the majority of cases, the back-up heater wasn’t active at all. 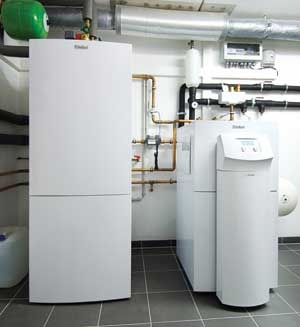 The average seasonal performance factor for water-to-water heat pumps was 3.5. This efficiency value is lower than expected for this type of heat pump. Low heat load of the analysed systems and high electrical consumption of well pumps may be an explanation for this observation. Additional factors influencing the efficiency of the water-to-water heat pump systems may be a low quality of the ground water resulting in the fouling of the water filter.

The preliminary results show that the ground source heat pumps are especially promising when it comes to reaching high efficiencies under real conditions. However, there is still a need for optimization in the integration of the unit in the supply system for the house and for the control strategies of the heat pump. Thus, a poorly integrated heat source or an incorrectly designed heat sink can decrease the seasonal performance factor of the heat pump.

On particularly cold days temperatures above 55°C do not need to be provided by an electric heater but rather can be achieved by a heat pump.

The seasonal performance factor of 3.8 for the brine heat pump system for supplying the space heating as well as for heating the water in residential buildings in the current building standards leads to the expectation that the often-cited SPF of 4 may soon be reached. Several systems already provide evidence of an SPF of over 4 in field tests and show what is achievable. When used solely for heating, the mean value of the SPF is 4.1 (new buildings). The main point to consider is the careful layout of the system as a whole, rather than with respect to single components.

For air heat pump systems there is still room for optimization. In the building stock, air-to-water heat pumps can reach values that exceed the determined seasonal performance factors provided that the layout is well planned and the flow temperatures are below 50°C.

Ultrasonic heat measuring devices in combination with data loggers were used to measure the produced heat. Heat for space and domestic hot water are measured separately. The loggers also facilitate a detailed measurement of the capacity of the heating source, the brine volume flow, its temperature before and after the vapouriser for GSHP and the ambient air temperature and humidity for ASHP. Electricity consumption was also closely monitored.

The data loggers save the entire system’s behavior on a minute-by-minute basis and the connection to all heat pump systems is constantly on-line. Costs are calculated on the basis of data transferred.

The following key values are rendered:

Basic data are collected be means of a standard questionnaire filled-out during an on site visit. It consists of three parts:

A database was programmed to store and process the data obtained from the questionnaires. It helps maintain control of the installed measurement technique, indicating what has to be sent/ordered in a particular moment.

Marek Miara is scientist and head of the team ‘Heat Pumps’ at Germany’s Fraunhofer ISE. Further information regarding both projects can be found at the respective websites: http://wp-effizienz.ise.fraunhofer.de and: http://wp-im-gebaeudebestand.de. Following the link ‘Messdaten’, there is also an option to access the location and basic information for each heat pump system included in the trials.