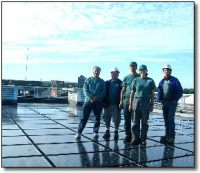 While it seems that new solar electric installations go up on schools and colleges in California nearly every month, the pace has been markedly slower on the East Coast. Harvard University however, can now boast they have installed their first-ever PV system on campus grounds.

Boston, Massachusetts – November 17, 2003 [SolarAccess.com] The 36.5 kW solar photovoltaic (PV) array was installed, on the Harvard Business School’s (HBS) Shad Hall on their campus in Boston. The system, comprised of 192 solar panels, was designed and installed by Global Resource Options (GRO), of White River Junction, Vermont. One major reason why California sees so many installations is because the state’s solar incentives are so rewarding. Often the cost of a PV system can be more than halved. Not only are incentives less effective on much of the East Coast, but solar electric systems are now a mature industry. Schools and Universities are less inclined to install solar PV systems because the technology has evolved away from being “state-of-the-art” or experimental, which tends to attract research and development (R&D)dollars, said Jeff Wolfe, Vice President of GRO. Today’s solar PV systems are refined, simplified, and increasingly efficient, and thus more of a “state-of-the-shelf” technology, said Wolfe. Despite the solar array not being a specialized R&D project for the University, HBS stood behind the installation and helped secure financing for the project. “Instead of shirking it off, they (HBS) grabbed hold of the idea and made sure the funding was there for it,” Wolfe said. While he didn’t have all the figures on the economics of the system for the school, Wolfe said some of the funds came out of HBS’s operating maintenance budget, with some further funding from Harvard’s Campus Green Sustainability Program. While the Harvard Business School was quick to support the installation, the motivation originated with the students. “The photovoltaic system simply made economic sense for HBS,” said Brian Robertson, a student at HBS and the President of the campus Sustainability Society who spearheaded the drive to obtain the grant funds and implement the system. “Based upon the installed costs, the grants that were obtained, and the power generation estimates, HBS will obtain less expensive power from the photovoltaic system while stabilizing their power costs and cleaning up the environment. It’s a true win-win-win situation.” Working with PowerLight Corporation as a certified dealer, GRO designed a PowerLight PowerGuard flat roof system using Sanyo HIT-190 PV modules, which are only available through PowerLight. The Sanyo modules were chosen for their high power density, which allowed HBS to install the system on one roof, rather than two as originally planned, said Wolfe. This leaves additional space for future expansion, and saved money through a reduction in required roof preparations. GRO was subject to a competitive bidding process for the project. Wolfe said his company gained efficiency with certain approaches. Splitting the panels up into different strings allowed the system to cope well with a slight shading on the system’s area. Shading issues would have degraded overall array performance by 25 percent with a single large. inverter. However, by using multiple string inverters, the array never loses more than 12.5 percent to shading, said Wolfe. The installation uses 16 of SMA America’s SB 2500u Sunny Boy inverters, with SMA’s data monitoring equipment since the school expressed a desire to make the system’s data available for interfacing with the campus’ computer network. Wolfe said they achieved their largest efficiency gains by connecting to the grid at 208 volts from the Sunny Boy inverters. He said Trace systems require an isolation transformer not controlled by the inverter. Whether the system is running under full power, or idle in the dead of night, that isolation transformer eats up an average of two percent of the nameplate power. Wolfe said after crunching the numbers, this can result in an 8-10 percent inefficiency of total system production. GRO worked with Joy Electric of Quincy, Massachusetts, to help put the system together in four days from the first roof hoist to final commissioning. Wolfe said the installation offered the Union member electricians their first opportunity to work on a solar electric system.