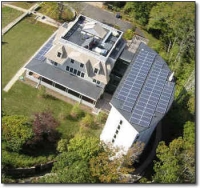 Woods Hole, Massachusetts [RenewableEnergyAccess.com] Relatively few good examples exist of buildings that have excellent energy performance. Often, green buildings are developed and publicized, but then actual energy functioning is not reported, sometimes because performance is less than anticipated. Having inhabited its new green headquarters for the first year, The Woods Hole Research Center (WHRC) is addressing those issues by tracking, and making publicly available, information on the performance of its building.

Because the Research Center’s Ordway Campus incorporates so many different efficiency and renewable energy collection strategies, Center staff decided to display the energy flows through the building in a series of web pages designed to provide a full overview of the building’s energy performance. This near-real time display collects and synthesizes data from over 70 different sensors which measure flows of electricity, heat, and fluids (air and water) into and out of the building as well as the site’s local environmental conditions. “Engineering is, by nature, conservative – and if large gains are to be made in the efficient design and specification of mechanical systems to support very efficient building design and operation, the engineering community needs real performance data to support their efforts,” said Joe Hackler, a research associate at the Center. “The ‘public face’ of the monitoring system is designed to encourage anyone to come in and explore how energy flows through a building of advanced design such as this one.” By using the facility as an example, and providing real-time data, the Center’s experience can become a model for others to evaluate and emulate. In designing the project, the Center chose to use commercially available equipment and technologies to demonstrate that large gains in efficiency are easily made with good design and good construction practice. The all-electric building includes a 26.4 kW photovoltaic (PV) array comprised of a total of 88,300 watt ASE (now RWE Schott Solar) panels connected in 11 series strings to eleven 2.5 kW SMA grid-connected inverters. Vermont-based Northern Power Systems designed and installed the PV array. A modest, residential sized, solar thermal hot water system was also installed and this was comprised of three 4′ x 8′ flat plate collectors. The system was done in-house with the now defunct T.R. White Co. as the main contractor. According to WHRC, between the months of May and November of last year, the solar thermal system provided 88 percent of the building’s hot water needs. A closed-loop ground-source heat pump system provided by Water-Energy Systems is the second major renewable energy component, and a 100 kW wind turbine is expected in the future. Currently, a wind monitoring station serves as a place holder. Other components reinforce the performance benefits of the building’s secure envelope including offset-stud framing, double- and triple-glazed argon-insulated low-e windows, enthalpy wheels that recapture heat and moisture from exhaust air and precondition incoming fresh air, and high-efficiency lighting controls and occupancy monitors. In its first year, the Woods Hole Research Center facility has performed near expectations. Even with a facility that is nearly twice the size of the Center’s previous combined offices and labs, the Center is using less total energy and spending less money on energy while reducing emissions attributable to operations to 28 percent of its previous total (a surprising 13 percent of the national office average for a building of the same size). Total annual energy usage was 89,669 kWh, with 30,469 kWh being generated onsite by a photovoltaic (PV) system, indicating that 34 percent of the facility’s total energy requirement was provided by its own PV system. While the building performs to a very high standard, the process of monitoring the facility’s actual performance has uncovered some energy use inefficiencies. Problems needing further evaluation include an overheating computer room located on the ground floor in a space not easily vented, electrical usage that cannot yet be attributed to a specific source and higher than expected pumping requirements for the HVAC system. When remedied, the solutions will lead to continued improvements in overall performance. Pages at the Web site listed below provide information and data to interested members of the public as well as other organizations and institutions considering innovations like these for their own facilities. The building, located on the Gilman Ordway Campus in Woods Hole, Massachusetts, was designed by William McDonough + Partners. Marc Rosenbaum designed the energy systems. The facility received a first prize in the 2004 Northeast Green Building Award in the “place of work (small buildings)” category from the Northeast Sustainable Energy Association. In recognition of Earth Day 2004, the American Institute of Architects (AIA) cited the Ordway Campus as one of the nation’s ten best examples of “green design” in the AIA/COTE 2004 Top Ten Green Projects Competition. See an overview of the building’s energy performance at the link below.