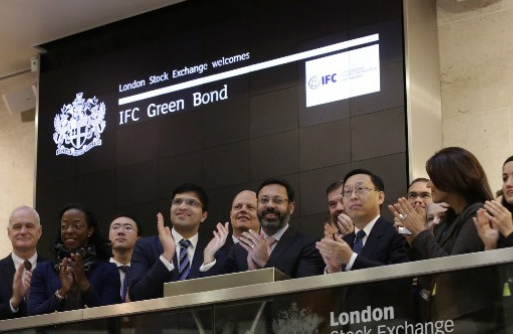 The UN Paris Climate Change Agreement went into force Nov. 4 having been ratified by the required minimum number of countries accounting for 55 percent of global carbon emissions. World Bank Group President Jim Yong Kim deemed the day “a defining moment in human history,” and urged governments, public and private sector organizations to regain the sense of urgency expressed a year ago in Paris to achieve the agreement’s primary goal of capping global mean temperature rise to between 1.5 degrees Celsius and 2 degrees Celsius.

Among them, World Bank Group members, such as the International Finance Corp. (IFC), its private sector investment arm, have been instrumental in developing a global market for green bonds. Following their lead, private sector corporations spanning a range of industry sectors have taken to issuing them, utilities in particular.

The Moroccan Agency for Solar Energy (Masen) announced it had issued the country’s first green bond on Nov. 7, the opening day of the 2016 UN climate change conference in Marrakech. Masen sold the dirham equivalent of $118 million worth of green bonds to help fund three solar energy projects — 170 MW or more total capacity — that are part and parcel of the NOOR PV1 project.

In the U.S., the California State Treasurer’s Office was the lead investor in a $200 million, two-year green bond issued April 1 by the International Bank for Reconstruction and Development (IBRD), the World Bank Group’s flagship international development agency. Rated AAA/Aaa by Standard & Poor’s and Moody’s, respectively, the green bond carries a 1.005 percent coupon with a maturity of Oct. 1, 2010.

There aren’t many, if any, renewable energy companies that can raise that amount of capital at such a low rate of interest. That, among others, is one of the major advantages and benefits World Bank Group has been providing private and public sector organizations involved in international development since it was founded in 1944 as WWII was drawing to a close.

“IFC is one of the world’s largest financiers of climate-smart projects for developing countries,” Alexandra Klopfer, IFC Treasury communications manager, told Renewable Energy World in an email. “Since 2005, IFC has invested about $15.3 billion in long-term financing for renewable power, energy efficiency, sustainable agriculture, green buildings and private sector adaptation to climate change, with an additional $10.1 billion in core mobilization.”

IFC issued a total of $1 billion of green bonds in fiscal year 2016 (July 1, 2015-June 30, 2016. The capital is being used to fund 36 projects across 22 countries, including 16 new markets, such as Bangladesh, Cambodia and China, Klopfer said. Investments in green banking and green buildings represent the two largest sectors, amounting to 59 percent of the Green Bond financed projects.

More recently, IFC on Oct. 31 raised $152 million of capital in a landmark issuance of five-year green Forest Bonds, which were bought by leading institutional investors, such as TIAA Global Asset Management and the U.K.’s QBE. The IFC Forest Bonds are the first to offer investors the choice of receiving coupon payments in the form of cash or carbon credits. The capital raised will support private sector project development that saves diminishing forests in developing countries.

IFC worked with Conservation International and mining and oil-gas multinational BHP Billiton in developing the Forest Bond product. BHP Billiton will off-take verified carbon credits originating from a UN REDD (Reducing Environmental Degradation and Deforestation) project in Kenya’s Kasigau Corridor in support of the bond issue’s price and to ensure that carbon credit coupon payments can be made as required.

According to Klopfer: “The 36 new projects financed through Green Bonds in FY16 contribute approximately 1 million MWh in annual renewable energy generation, sufficient to supply close to 74,000 American households with electricity.”

In terms of GHG emissions reductions, that’s 1.3 million tons of CO2-equivalent, about that emitted by 275,000 cars. New projects in the wind energy and the green banking sectors account for 57 percent of the total projected reduction.

“We believe that capital markets have an indispensable role to play in channeling money into much needed climate investments by leveraging private capital,” Klopfer said. “Developing innovative financing products to spur additional climate investments through the capital markets is key to IFC’s mandate and underpins its commitment to promote continued growth and development of the green bond market.”