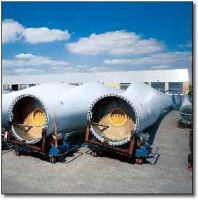 Ebensburg, Pennsylvania [RenewableEnergyAccess.com] Gamesa — which had recently announced a plan to base a wind turbine generator blade manufacturing facility in Pennsylvania — has now secured a location for their future facility in at the South Park Industrial Complex in Ebensburg, located about 20 miles from Johnstown in Cambria County.

At a time when U.S. manufacturing operations are facing increasing pressure from abroad, the new facility will have major local impact on jobs and the economy. The opening of the plant should create as many as 500 construction and operations jobs, including 236 permanent high-paying manufacturing positions. “My number one objective is economic revitalization-to create the new jobs we critically need and ensure sustained economic growth across our Commonwealth,” Gov. Edward G. Rendell said. “Energy is a top priority for my administration. Our strategic commitment to this vital economic sector, where investments in companies like Gamesa can help to rebuild our economy, benefits our environment and enhances our national security.” In September, Gamesa announced its U.S. headquarters and East Coast development offices would be located in Philadelphia. The manufacturing plant represents the latest piece of the company’s Pennsylvania development plans- totaling $40 million in investments in the state. Together with the construction, operation and maintenance of its wind farms, Gamesa’s manufacturing facility and two Philadelphia offices are expected to create as many as 1,000 jobs in the Commonwealth over the next five years. “Not only is this one of the most significant economic development announcements in decades for the Johnstown area, but it also represents a significant turnaround with Pennsylvania luring high-paying manufacturing jobs from overseas,” Gov. Rendell said. “Gamesa’s commitment to Pennsylvania enhances our reputation as a leader in the development and deployment of clean and advanced energy technology, and it opens the doors for even more job growth opportunities in the future as clean energy markets expand.” The fact that Pennsylvania is one of the latest states to adopt a renewable energy requirement of their electric utilities also helped to sweeten the deal. “We are most impressed with Pennsylvania’s recent initiatives in renewable energy, in particular the clean energy portfolio standard signed by Governor Rendell and passed by the Legislature last November,” said Inaki Lopez Gandasegui, Chief Executive Officer of Gamesa. “This standard will require a total of 18 percent of Pennsylvania’s electricity to be generated via alternative energy sources by 2020, in the area of 3,600 megawatts, and represents the kind of forward thinking that has inspired Gamesa to come to Pennsylvania.” Gov. Rendell recently launched several major initiatives to build a clean, indigenous, diversified energy industry in the state. Pennsylvania now proudly boasts one of the most far-reaching and ambitious renewable energy measures in the nation with a two-tiered clean energy portfolio standard that ensures in 15 years, 18 percent of all of the energy generated in the Commonwealth will come from clean, efficient sources, including wind power. Headquartered in Vitoria, Spain, Gamesa is the second-largest wind-energy manufacturer and the only vertically integrated wind-energy company in the world, meaning it manufactures the parts for wind-energy units and then develops the wind farms itself. The Pennsylvania manufacturing facility will produce high-tech blades for systems that ensure maximum performance on all types of sites and in all types of wind. The company has worked out 600 MWs worth of agreements to sell wind-generated power to Pennsylvania utilities, with a goal of reaching 1,000 MW, enough to power more than 300,000 homes. Pennsylvania already is a leader on the East Coast with wind-farm production capacity at 129 MW, with at least another 84 MW scheduled to come on line within the next year.