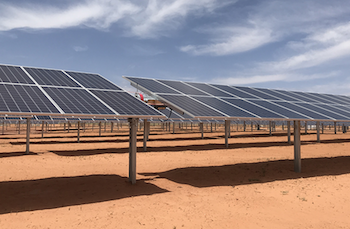 This year’s somewhat smaller, but seemingly more intense Intersolar North America trade show held in San Francisco this week featured a wide array of innovative solar tracking, racking and mounting solutions. While offerings by new and old players from around the world include many fresh design and feature developments, here are a few of the standouts:

Among tracker manufacturers, Soltec launched its new SF7 single-axis tracker at Intersolar, featuring a zero-gap design along the central shaft, with opposing rows of panels abutting one another. The design feature permits the array to generate five percent more electricity than the standard decentralized tracker design now popular in market, said Jose Alfonso Teruel, the research and development manager for the Livermore, Calif.-based subsidiary of the Spanish company.

Soltec also claims to have the lowest number of driven pile supports per MW in the industry, with spacing of around 20 feet, Teruel said. The SF7 enables improved yield through its TeamTrack asymmetric back-tracking control of individual arrays, with a tracking arc of 120 degrees. The company has reached annual sales of more than 1 GW in the Americas.

Array Technologies, the godfather of the U.S. tracking industry, announced that it has forged a strategic partnership with the high-profile Shoals Technologies Group for balance of system supply. The two companies displayed their products back-to-back at the show. The cooperation between Albuquerque-based Array and Portland, Tenn.-based Shoals will streamline the project engineering design, procurement and construction of projects, suggested Ron Corio, the founder of Array.

“We have no doubt that the collaborative effort of our two teams will result in a BOS solution that will offer efficiencies never before seen in the solar market,” said Shoals Founder Dean Solon. While Shoals is seen as a market leader in centralized options for BOS solutions, Array has installed over 12,000 miles of trackers, as the world leader in cumulative installs.

Sun Action Trackers also launched a new tracker design at the show; its DualTrack 24, a dual-axis tracker with patented real-time light sensing technology. The new design from the San Antonio-based company features a 4-panel-by-6 panel table, a slew drive, and a 60-degree inclination capability. The new design follows an announcement in March that the company was offering its PST-2AL model for residential applications, an untapped market for trackers. 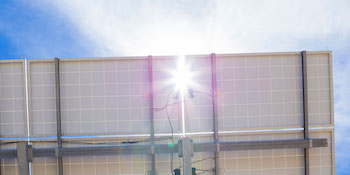 “There is tremendous opportunity for this technology at sites with undulating terrain or steep slopes — like the project we now have being installed on the side of a mountain in Hawaii,” said Jonathan Bunting, the marketing and communications manager for the company. The magnesium alloy posts for the system are designed to withstand high corrosive atmospheres and are five to 10 times stronger than conventional galvanized steel, the company notes

Nextracker, a Flex company and the global leader in 2016 tracker sales, unveiled its new TrueCapture enhanced monitoring and positioning system at the show, claiming that the enhancement will offer an average of four percent greater yield. The system includes intelligent learning ability and offers self-adjusting tracker control for individual arrays. The added technology, an outgrowth of the company’s acquisition of BrightBox Technologies last year, continuously refines the tracking algorithm of each individual array in response to acquired insolation and weather condition data.

The weather sensor and monitoring components are mounted beside the solar panels on the array, along with the small self-powering module each array features. The cumulative refinements in this generation of the tracker compensate for traditional energy production losses from construction variability, terrain undulation and changing weather, pointed out Dan Shugar, founder of the company. 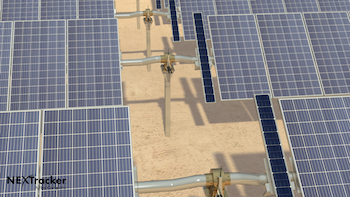 Image: Nextracker has enhanced its monitoring and positioning ability with TrueCapture. Credit: Nextracker

Solar FlexRack also demonstrated its newest generation single-axis tracker, the TDP 2.0, which offers up to 90 modules per array, greater rotational range to 60 degrees, and more granular programmable technology to mitigate inclement climatic conditions, noted Steve Daniel, the EVP of sales and marketing for the Youngstown, Ohio-based company. Solar FlexRack is a division of Northern States Steel.

The TDP 2.0 features a redesigned bearing assembly and a larger slew drive, which help combat high wind situations, supporting up to 50 pounds of snow per square foot.

“We are seeing a lot of installs in states like Montana and Minnesota, where there is pretty heavy snowfall,” Daniel said. The company now has about 50 MW of trackers installed following its 2015 release of the initial TDP design, and orders for 2017 have already doubled last year’s total, he noted.

Solar racking options are still proliferating at Intersolar. Alion Energy, the Richmond, Calif.-based maverick inventor of continuously extruded concrete racking, touted its latest installation in Mexico at Intersolar, noting that the project is a test case for the technology in the country. The $14-million, 8-MW Jalisco Solar 1 project, located at Zacoalco de Torres, was completed in May for Guadalajara-based Fortius, in cooperation with Trina Solar and ABB, with 100 percent Mexican financing, a first for a project this size, the partners said. Fortius is now working to double the capacity of the plant.

The rocky, desert conditions at Jalisco play into the strength of the Alion design, which is being marketed in the Middle East now, according to Jesse Atkinson, the vice president of marketing and strategic development for the company. Alion is also supplying the Jalisco plant with its Rover robotic module cleaner, which uses 30 percent less water than some other cleaning systems.

TerraSmart, known for its formidable ground screw, debuted its TF2 Landscape Rack at Intersolar this year, featuring a landscape orientation that can accommodate a 6 foot-by-8 foot table configuration, supporting more modules per foundation, the company said. Despite the large size of the table, the array has been tested for snow loads up to 100 pounds per square foot.

Unlike traditional lockbolt fasteners, there is no pin break, so there is no wasted metal, no corrosion at a pin break surface, no installation shock, and no risk of pintails being dropped into the structure.