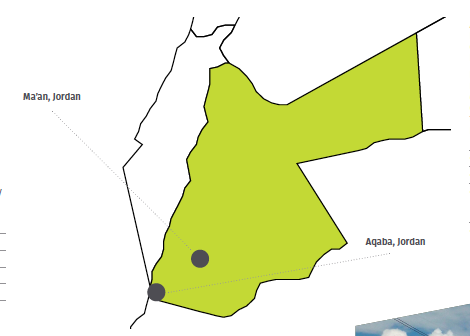 Last month, Jordan took a major step toward achieving increased independence from imported energy. In the coastal city of Aqaba, the kingdom’s very first utility-scale PV project broke ground. The 10-megawatt (MW) Shamsuna Project is scheduled to enter into full operation when construction is completed in October of this year.

Spearheaded by a partnership between Desert Technologies and Enerray SpA, the Shamsuna Project is the first of 12 renewable energy projects under management by the Ministry of Energy and Mineral Resources (MEMR). Jordan’s National Electrical Power Company (NEPCO) is backing the project with a 20-year power purchase agreement.

Nour Mousa, CEO of Desert Technologies, called the Shamsuna plant an “exciting landmark project” that will secure Jordan’s unique position as the first major solar PV market in the Middle East. Michel Scandellari, General Manager of Enerray SpA, said the project and others like it will “ensure a balanced and diversified energy mix and sustainable growth for the region.”

Jordan’s high reliance on foreign energy sources, which stands at approximately 97 percent, is the impetus behind the kingdom’s investments in solar and wind power projects. Other planned large-scale PV projects in Jordan include the 23-MW Falcon Project in the southern region of Ma’an, which will also be headed up by Desert Technologies and Enerray SpA. The Falcon Project is expected to break ground in August of 2015.

The Desert Technologies-Enerray SpA partnership is leading a number of other renewable energy projects throughout the Middle East and Northern Africa, in which the joint venture will act in the capacity of EPC (engineering, procurement and construction) and O&M provider. Recently, Egypt awarded Desert Technologies and Enerray two 50-MW solar PV projects and one 50-MW wind project under the country’s Feed-in Tariff (FIT), which should drive the construction of up to 3.6 gigawatts (GW) of wind and solar capacity on a Build, Own and Operate basis.

“Given the energy shortages in Egypt, renewable energy is essential for the country’s continued economic and industrial growth,” Scandellari said.

Marc Norman, an associate with U.S. law firm Chadbourne & Parke, said, “Jordan has been at the forefront of the Middle East’s renewable energy revolution because the business case there is so strong – and keeps getting stronger.”

Norman added that the work done by the Jordanian government, along with project developers and financiers, will serve as a blueprint for the entire region. “Grid parity is the new reality,” Norman said. “We are now entering into a very exciting new phase where large private electricity consumers are keen to procure renewable energy independent power projects to limit upfront costs and (often dramatically) reduce their electricity bills. In a region where almost everything is government-driven, this is a little revolution in itself.”

Desert Technologies was formed in 2012 following the purchase by Al Jeel Al Hader Trading Company of U.S.-based EPV Solar’s production lines and R&D labs. It formed its partnership with Enerray SpA parent Maccaferri Group in 2013. A year after acquiring a 75 MW crystalline silicon assembly line, Desert Technologies’ portfolio has grown to include $400 million in solar projects, with an estimated $1 billion of projects in the planning stages.