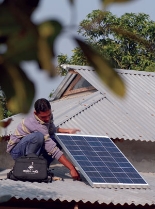 London, UK [Renewable Energy World Magazine] The Solar Home System (SHS) dissemination programme in Bangladesh is considered to be one of the most successful of its kind in the world, bringing power to rural areas where grid electricity supply is neither available nor expected in the medium term. Between January 2005 and July 2009, nearly 350,000 SHSs have been installed in the country. Supported by grants and soft loans from the World Bank, GTZ, KfW and the Asian Development Bank, installation rates have increased to a rate of more than 15,000 per month.

The Bangladesh programme is implemented on the ground by micro-finance institutions, known as Partner Organizations (POs), which finance the SHSs through a loan scheme which involves a less than 10% grant funding element (see box panel).

The overall SHS initiative is organized and overseen by the Infrastructure Development Company Limited (IDCOL). This is in charge of overall project management and monitoring, defines the regulations for loan disbursement to the POs and sets the technical standards for SHS components and installations. IDCOL holds monthly meetings with the POs and there is a continuous two-way process of feedback between them.

The authors of the study discussed here were selected as monitoring consultants for the SHS project’s implementation, carrying out both technical monitoring of the systems themselves and financial assessment of the POs.

The technical performance of systems was monitored on a 1.5% sample basis between June 2007 and August 2008. During this period around 100,000 SHSs were installed by the POs, co-financed by a €16.5 million (US$22.7 million) contribution from KfW. From a total of 1598 SHS inspected, only around 4% of SHSs had serious technical problems. In the case of the financial assessment, the results clearly showed weaknesses in the credit risk management of all POs and subsequently the consultants, in co-operation with IDCOL, introduced new risk management guidelines.

Tradition of Micro-Finance in Bangladesh

As micro-lending is an established tradition in Bangladesh, the programme was channelled through the micro-finance institutions selected as POs. They are the key players in the initiative as they are responsible for technical installation and maintenance services, as well as for loan disbursement and collecting payment installments.

Many of the biggest micro-finace institutions in Bangladesh have established energy divisions that are involved in the SHS programme. Grameen, for example, has intensively developed its energy division, called Grameen Shakti (GS), during the last six years and is now responsible for two thirds of all installations under the SHS. Second to GS comes the BRAC Foundation, part of BRAC which is the biggest NGO in the world.

In total 15 POs are registered under the IDCOL programme. All have established a presence throughout the country, with some 855 field offices set up so far. At least one manager/accountant and two technicians work full time in each office. They also carry out the installation of the SHS and provide technical services.

GS has increased its installation rates significantly during the last few years from around 1000 SHSs in January 2005 to more than 8000 systems in July 2009. This level of increase was only possible through investments in new field offices, hiring and training of technicians and accountants and a strong management.

All POs are obliged to report their installation figures and financial details such as collection efficiency and overdue collection rates to IDCOL on a monthly basis. This is designed to ensure that the programme is transparent in terms of PO performance at the headquarters level.

Technical and financial data from the PO field offices is collected in order to verify the figures. IDCOL inspectors also carry out technical checks of the installed SHSs, and have targeted a 50% inspection rate before loan disbursement to the POs. Due to the POs’ rapidly increasing installation rates, IDCOL has increased its inspection staff to keep pace.

The performance of the POs is quite diverse. The three leading POs account for more than 85% of all installations under the scheme. Some others work only in specific areas of the country. One PO, for example, concentrates on the Chittagong Hills area, where population density is low and political unrest much higher than in other parts of Bangladesh.

In general, the high population density of more than 1000 inhabitants per km2 is favourable for the solar programme. Once a PO has established an office in a village, customer accessibility is very good and travel time and costs for customer visits are low. This allows POs to guarantee a 24-hour maximum reaction time to investigate user complaints.

The SHSs implemented under this programme have a rated module power of between 30 and 130 W, with 50 W the most common. Up to July 2009, 337,000 SHSs with a total capacity of around 16 MW had been installed. Since the country does not have a local module manufacturer they are imported, mainly from Japanese company Kyocera. The SHS batteries are lead-acid batteries. Due to the high import tax (37.5% for sealed lead-acid batteries) all are sourced locally. The main supplier is Rahimafrooz, which accounts for at least two thirds of all deliveries. Charge controllers are also manufactured locally by assembling prefabricated kits imported from Indonesia-based Sundaya and STECA of Germany.

The SHSs are delivered together with three or four compact fluorescent light bulbs, which are sourced both locally and internationally. IDCOL has defined technical standards for the system design and publishes a list of eligible components.

Households use the lights in their cooking area and in their courtyard working spaces. Some customers use the systems to power their radios and small 12 V televisions and almost all use them to charge their mobile phones.

Information is currently not available regarding any income generated by households using SHS, as this was not included in the monitoring service. However, owners of small enterprises in Bangladesh often use SHS to light their shops or restaurants, which they report increases their income.

The monitoring consultants inspected 1.5% of all newly-installed systems during the period of the study, or around 100 SHSs per month. The systems were randomly selected and proportional to the POs and geographical distribution.

Three categories of problems were defined for the inspections process. The first covered negligible inefficiencies, such as shading or the wrong installation angle of the solar module, which could be corrected locally. The second problem area was defined as deficiencies needing attention, for example the use of inferior quality wire or components that do not meet the technical standards in place. The third category covered installation defects that could potentially damage the system or reduce its lifetime.

Only 60 out of the 1598 inspected SHSs, or 4%, showed installation defects requiring immediate reparis to prevent damage to the system. The main problem in this category was damage to, or bypassing of, the charge controller.

The percentage of problems remained stable during the monitoring period, which shows that the increased number of installations did not affect the quality of work. This indicates that technician training facilitated by IDCOL and the POs provided sufficient technical skills to newly-employed technicians.

The consultants found a moderate 27% of SHSs with inferior installation quality, such as the use of excessively long or low quality cables not up to IDCOL standards, or bad wiring. Most of the inspected systems (69%) showed no problems at all or only negligible inefficiencies.

Financial Audit Shows Some Cause for Alarm

The collection performance of all POs was analyzed by the monitoring team throughout the period of the study and 127 out of the total of 855 field offices (nearly 15%) were visited.

PO field offices are responsible for customer selection and registration and the collection of down payments and monthly installments. The offices report their monthly figures to the PO headquarters in Dhaka. These figures include the number of newly installed SHS and statistics covering the actual and overall due installment collection efficiency. In general, PO field office staff carry cash once or twice a day to the nearest bank to ensure the safety of the funds.

SHS customers can opt for a 24 or 36-month loan period, and to date, most have chosen the latter. The POs provide loans with a 6% interest flat rate, with the SHS itself treated as collateral.

Refinancing of the programme is made possible via eight to 10-year soft loans from IDCOL to the individual POs. IDCOL receives this fund from the government of Bangladesh, which has itself received soft loans from the World Bank and the Asian Development Bank with very long tenors.

The results of the PO assessments showed a huge discrepancy between the sample audits in the field offices and the collection efficiency reported by the POs to IDCOL.

On average, up until mid-2008, collection efficiency was reported as above 95% for all POs. The efficiency found at the field offices visited, however, was far below this percentage – sometimes below 50%.

We assume that incoming payments from new customers for the first installment were not clearly separated in the books from overdue payments from existing clients who were in arrears.

In any case, the data was alarming. In response, IDCOL and the consultants introduced a Credit Risk Management Guideline to the POs, and IDCOL inspectors began measuring the portfolios at risk (PAR30) on a sample basis. (PAR30 refers to a delinquency of 30 days.) If a monthly PAR30 figure is below a certain threshold, POs must then undertake immediate measures to improve the delinquency rates.

The study’s conclusion was that the SHS dissemination programme in Bangladesh is being successfully implemented. Although monitoring found that only around 4% of SHSs had more serious technical problems which had to be adjusted by the POs after detection, the authors recommended technician training, monitoring of SHS over the lifetime of the batteries and statistical evaluation on productive usage of SHS.

Concerning financial monitoring, the study found divergences in the collection efficiency between field offices and headquarters. Together with IDCOL, the authors introduced risk management guidelines at the POs and recommended more focus on credit risk management, especially regarding customer assessment and overdue installment collection. They also highlighted additional savings or credit opportunities from POs for customers to pay for battery replacements.

The future looks promising for the SHS programme, as The World Bank has recently allocated additional credit funds to it and, with a reallocation of the KfW funds, a joint financing of 300,000 additional SHSs by 2012 has been agreed. Technical and financial monitoring will continue, now that the project has increased in scope.