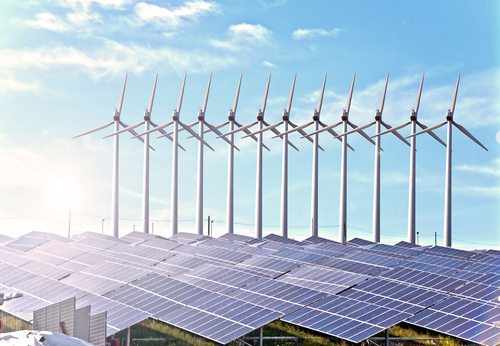 EFG Hermes Holding SAE, the largest independent Arab investment bank, plans to build a portfolio of renewable energy investments in Europe and the Middle East over the next five years as utilities in those regions add cost-competitive solar and wind operations.

The bank is targeting about 1,000 MW of wind and solar assets in Europe over three years, Bakr Abdel Wahab, the Egypt-based bank’s managing director for private equity, said in an interview in Abu Dhabi. The company paid $208 million for 132 MW of a French wind-energy business in 2014, its first investment outside the Middle East and North Africa, he said.

European countries have embraced renewable energy to reduce carbon emissions and replace or supplement power supplies from coal and nuclear plants. Subsidies and other incentives have spurred developments in renewables technology in some countries, and long-term power purchase agreements and tariffs support their plants.

“The regulatory environment in a handful of European countries is favorable and stable,” Abdel Wahab said on Jan. 19. “The push from certain governments to facilitate new development of renewables exists.”

EFG Hermes wants wants to raise capital and use its own funds to invest in European plants that already produce power and can generate income immediately, Abdel Wahab said. It’s looking at opportunities in Western Europe, he said, without specifying any countries.

Abdel Wahab also declined to say how much money EFG Hermes is trying to raise in its renewables push. Wermuth Asset Management, which announced its second renewable energy fund this month, is seeking 250 million euros ($273 million) to buy European renewable-energy assets, the Germany-based business said in a Jan. 11 statement.

The French wind-farm purchase is EFG Hermes’ second green-energy investment, after it invested in a fund financing a wind farm in Jordan. The bank will expand its renewables portfolio in the Middle East, where countries are diversifying energy supplies away from oil and natural gas, and the bank is targeting a regional portfolio of 500 MW within five years, Abdel Wahab said. EFG Hermes plans to invest in Middle Eastern power-plant projects alongside developers, he said.

Jordan plans to double the share of renewable energy projects providing its electricity to 25 percent by 2025, according to Ibrahim Saif, the energy minister, while Egypt wants to generate 20 percent of its power from renewables by 2022.