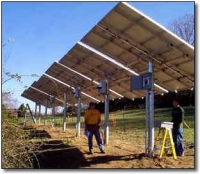 The facility is operated by the Alice Ferguson Foundation, which is a nonprofit education organization based at the Hard Bargain Farm Environmental Center. The 330-acre working farm, located along the Potomac River In Accokeek, Md., serves more than 10,000 students from the D.C. area annually at the farm and regional National Parks. Students and their teachers spend a day or more learning about the natural environment, farming and the cultural heritage of the Potomac River watershed in a variety of educational programs, science camps and special events. The foundation has won a number of awards over the years for their environmental education programs. In mid-November, FSEC staff members Jim Dunlop and Donard Metzger completed acceptance tests and installed data acquisition equipment for a 12-kW grid interactive PV system that will provide an estimated 75 percent of the energy needs for the farm’s Wareham Lodge. At the October 28 system dedication and ceremonies celebrating the Foundation’s 50th anniversary, Maryland Congressman Steny Hoyer noted that the new system “will be one of the largest solar electrical systems in Maryland, and will offset over 1,000,000 pounds of greenhouse gas emissions over its lifetime.” The Foundation is also installing solar powered lighting for the parking lot surrounding the Wareham Lodge. “Using solar energy as a demonstration of sustainable practices is something that our organization was committed to and wanted, but actually doing it was intimidating,” said Tracy Bowen, executive director of the foundation. “It was through the technical expertise of Jim Dunlop and staff at the Florida Solar Energy Center that we were able to implement this major project. As a result of FSEC’s efforts, thousands of children and visitors will have their first hands-on exposure to solar energy.” FSEC worked with the foundation staff in conducting site surveys and developing project bid specifications, facilitating meetings with the local utility and code officials on installation and interconnection matters, helping review bids and selecting a contractor, conducting final acceptance for the PV system, and installation of data monitoring equipment. The system, which was installed by Aurora Energy of Annapolis, Md., includes a BP Solar array with model 3125S polycrystalline modules. Fronius IG3000 inverters are used for each of the four sub-arrays, and are connected to an independent panel tied into the electrical distribution system and dedicated metering at the lodge. The system’s performance data and building load are being recorded and downloaded to FSEC servers on a daily basis, and the data is available to the foundation staff, teachers and students on a special website. This data also feeds a PV systems performance and reliability database – an important part of DOE’s PV systems benchmarking initiative.