As an industrial powerhouse and the world’s largest energy consumer, China is fortunate to have abundant coal and hydropower resources. However, to meet demand in the east and south of the country, planners continue to seek new ways to generate local energy. In addition, plans call for development that reduces the use of fossil fuels as a way to also reduce air pollution.

A consortium combining the experience of Dutch hydraulic experts and global infrastructure design and consulting firm ARCADIS is developing an innovative tidal power technology as a dependable and renewable source of energy, concentrating on China. Called Dynamic Tidal Power, or DTP, this new method of power generation harnesses the energy in oscillating tidal waves that run parallel along the coasts of continental shelves and contain powerful hydraulic currents, such as are found in China, Korea and the UK. 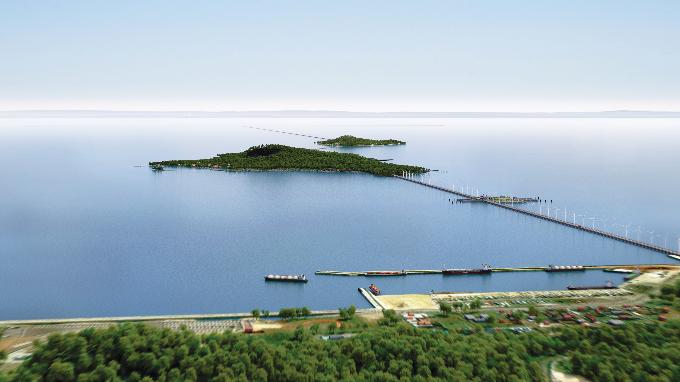 The group has received $2.5 million in funding from the Dutch government and $2.5 million from the Chinese government for tidal power feasibility studies. The consortium is currently assessing the viability of building a tidal power facility off the east coast of China that would produce the equivalent of six large coal or gas power stations and provide energy for more than 10 million homes.

Co-created by ARCADIS engineer Rob Steijn and Kees Hulbergen, the Dynamic Tidal Power concept calls for a very long (18+ miles) dam built perpendicular to the coast, ending in the sea, thus capturing the hydraulic force of tidal currents in turbines built into the dam. The dam may also have a perpendicular barrier at the far end, forming a large T or Y shape. As the dam blocks the horizontal acceleration of the tides, a force or head is created, which can be converted into power using a long series of conventional bi-directional low-head turbines installed in the dam. Dynamic tidal power doesn’t require a very high natural tidal range, but instead an open coast where the tidal propagation is alongshore. Although the head is relatively small (1-3 m), the discharge (m3/s) is enormous, leading to high installed power rates.

According to the team’s research models and feasibility studies, a typical single dam will deliver around 5 GW (5,000 MW) of installed capacity. If two dams are installed at the right distance from one another (about 125 miles apart) and feed into the same grid, they complement one another, with one dam at full output when the other is not generating power. Because tides are predictable and regular, this technology makes it easier for utilities to manage power generated by the system.

In contrast to existing technologies that close off tidal areas with strong tidal currents, the DTP dam’s perpendicular design offers a key environmental advantage of not interfering with the tidal currents in and out of a tidal basin.

This innovation is expected to breed more innovation as developers explore ways for this type of structure to become foundation infrastructure for other purposes. For instance, offshore wind turbines can be built on the DTP dam. DTP dam can be combined with various other functions, such as coastal protection against waves and tsunamis, deep sea ports, aquaculture facilities, (controlled) land reclamation and connections between islands and the mainland. For dams that include a drivable surface, the addition of a roadway can potentially be positioned to facilitate the O&M of the wind towers and DTP turbines. As costs carriers, these additional functions help to lower the cost per kWh to levels competitive with conventional coal fired power.

Early studies show that a large DTP dam along the Chinese coast has the potential to produce 5,000 MW or more of installed capacity, placing it among the world’s largest hydropower projects. The DTP group estimates the total amount of theoretically available potential DTP power in China is 80-150 GW. This potential capacity for DTP in China equates to a significant portion of China’s estimated 400 GW hydropower capacity.

The team has also begun studying viability in two locations in China, determining that local tidal characteristics near a southern dam made this location more practical for testing. Since according to China’s Second Institute of Oceanography (SIO), this southern location experiences powerful tides with promising seabed conditions and can contain long arrays of turbine/generator units, the team built a higher resolution numerical tidal model to study this location further. They are now analyzing a geological survey using ultrasound, which provides information about the sea depth and top sediment layer. The next step of the geologic survey is to drill bottom cores at the site.

Based on a preliminary assessment, the southern dam has the potential for 10,000 megawatts (10 GW) of generating capacity, with 3,000 turbine units installed, capable of producing 3.5 MW each. Clearly, the efficiency of the turbines will make a huge difference in the viability of Dynamic Tidal Power. Partner company Pentair Nijhuis has successfully produced and independently tested a physical scale model of a fish-friendly bi-directional ultra-low-head turbine, with a proven efficiency of over 85 percent. Turbines of this design would enable the DTP installation to capture the power of both incoming and outgoing tides without harming the local fish population.

In the coming years, the DTP team, with essential cooperation from Chinese partners, will continue the development of a Chinese DTP project at dam 6XL. With commitment and resources from the Chinese government supporting the research for this technology, the partners are now building both the business case and the technical information needed to support continued investment. All parties shared results and ideas at a large technical seminar April 3 – 4, 2014 in Hangzhou, China. A smaller meeting followed on July 7 – 8, also in Hangzhou, at which the group discussed turbine testing results. Both Chinese and Dutch developers recognized the need for ongoing design studies that will support confident decision-making. On the economic side, in a meeting at the Tidal Summit in London in November 2014, Chinese and Dutch researchers discussed preliminary results of the economic assessment.

Meanwhile, the European Commission is investing heavily in the development of innovative technologies under its new HORIZON 2020 program. The DTP team is in close communication with Europe’s leaders to start similar R&D paths like those followed in China.

“ARCADIS is excited to continue work that has so much potential,” Steijn notes. In addition to the environmental and renewable benefits, we want to explore the many ways DTP dams can bolster resilience or serve as the foundation for other energy or transportation infrastructure.

“Our exploration seeks to turn the potential liability of the huge scale needed for DTP into an asset – literally. If a DTP dam can become a flood barrier or anchor for wind power turbines, we’ve automatically solved an important energy cost issue and created new infrastructure that can add to the value of a DTP project. Already the research has spun off important advancements in how we understand tidal movement and hydraulic head in unsteady flow and furthered the development of low-head turbines.”