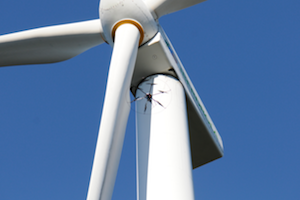 Drones the size of manhole covers are helping Spain’s biggest utility to squeeze costs of green electricity, spotting faulty solar panels and wind-turbine blades way ahead of engineers on the ground.

Iberdrola SA’s 500,000 euros ($586,000) investment in drone maker Arborea Intellbird SL is not only helping the company to gain a better understanding of how technology is reshaping the energy industry — it’s also demonstrating a new model for venture capital for Europe’s largest utilities.

The funding is part of 70 million euros Iberdrola has set aside to incubate new technology — an investment that’s notable because of its small scale. While rival utilities from Centrica Plc to Fortum Oyj and EON SE are pouring hundreds of millions into VC projects, Iberdrola is taking smaller, less expensive stakes and using its role more to investigate new ideas.

“It’s not about the money — our objective is to learn as much as possible,” Agustin Delgado, Iberdrola’s chief innovation and sustainability officer, said in an interview in London. “That has a lot more value than the $70 million invested thus far.”

Iberdrola’s program to support innovation is smaller than the corporate venture capital arms other utilities established, typically bringing in 2 million euros to 5 million euros for each deal out of a pot of 100 million euros or more, said Meredith Annex, an analyst at Bloomberg New Energy Finance.

By comparison, Centrica has 100 million pounds ($132 million) set aside for VC, EON about 114 million euros per year since it started in 2013 and Fortum as much as 200 million euros, according to BNEF research.

“Venture capital can be a cheap way to explore new areas,” Annex said. “It has advantages over other methods such as in-house R&D or exploratory M&A. It gives traditional players access to external talent and insulates this from their own company culture, which may be slower and more adverse to change.”

Loaded with cameras and sensors, the drones can inspect wind turbines, solar farms and power lines in a fraction of the time that it takes human engineers to do the job with a telescope. They gather infrared images, detecting power-sapping hot-spots on solar panels and weak areas on turbine blades in need of maintenance.

After investing in Arborea in 2014, Iberdrola has helped the start-up expand and start serving other manufacturers, including Siemens Gamesa Renewable Energy SA.

The utility tried to launch its own drone program years ago and ran aground. “Our engineers are very knowledgeable about the core of the business but were not expert drone pilots,” Delgado said.

Delgado and his team have evaluated more than 2,000 companies seeking startup capital, making it an opportunity to learn about everything from new methods of power generation to smart-home equipment designed to help consumers and utilities save energy. From 2006 to 2012, Iberdrola backed technologies as diverse as marine tidal and biofuels using algae.

Its work on wind and solar helped made it one of the first major utilities to use renewable energy in a big way, giving those technologies a foothold in Europe’s power market. Now, the utility is paying more attention to devices that help cut operation and maintenance costs and that help consumers and grid operators to manage power consumption. The goal is to make Iberdrola more efficient and to keep it abreast of new technologies.

“Sometimes, when you read reports or magazines, you have the feeling that you’re missing on something,” Delgado said. “That’s not a very comfortable feeling, and it leads sometimes to money not being directed in an appropriate way. Now, we feel more comfortable that we know what is right and wrong for our business.”

In addition to drones, Iberdrola has backed:

Stem Inc., a California energy-storage provider that uses artificial intelligence to gauge when customers will need power Innowatts Inc., a Houston-based company that’s using smart electric meters to provide demand forecasts for individual households and aggregating the data in a way that utilities like Iberdrola can use to reduce hedging costs GDES Technology for Services SL, which is based in Valencia and uses robots to inspect parts of nuclear power plants where high pressure and radiation levels prevents humans from working

Delgado says like he’s learned what Iberdrola needs to know even though he’s exposed less capital.

“The goal of Iberdrola venture capital investments is not to earn money but rather to understand the new technologies and absorb knowledge, information and innovation that are applicable to our operations,” Delgado said.