Voerde, Germany — It is perhaps obvious that renewable resources must have a higher share of the energy mix, but it is indisputable that increasing this share should not come at any price. The factors that influence the cost of wind energy are mainly the life-cycle costs, which include the overall wind turbine construction, operation and maintenance as well as the return on investment through the energy generated. Therefore reliability, serviceability and efficiency – as well as a compact wind turbine design – are the key factors to make a wind turbine competitive.

The drive train, which can be considered the ‘heart’ of a wind turbine, has a significant influence on these parameters. This is why all aspects have to be considered specifically in the design of new and innovative drive trains.

With more than 30 years of field operations, the conventional drive train, including a gearbox, coupling and generator, is a very reliable concept which has been continuously optimised over the decades. Today, with more than 150 GW of installed wind turbines driven through gearboxes, it provides a lot of advantages, particularly with respect to in-depth know-how, a huge amount of experience and competitive production costs.

After the success of the conventional design, new concepts are now being especially designed and developed to meet the requirements for compact design, high efficiency and easy maintenance. Every concept has its own advantages, so it is not possible to talk about the ‘perfect’ drive train design. But every drive train also meets specific requirements of a single customer’s demands so that there is effective consumer choice.

One of these new designs is the Winergy Multi Duored gearbox and the power rating of 6.5 MW makes it the most powerful gearbox in the world. The company developed its first 5-MW offshore gearbox with two planetary stages and a third helical stage back in 2003.

The Multi Duored has more of a cuboid shape — in contrast to the tube-like appearance of planetary gearboxes — and this shape is a result of the technology inside. Instead of planetary stages, the Multi Duored gearbox consists of helical stages. For decades the duored technology has already distinguished itself in other industry sectors — such as crusher drives — and the sugar and cement industries have relied on it, for example, because of advantages such as high reliability, low weight and very high power density (Nm/kg). These same factors influence the cost of energy, so the concept was interesting for the wind industry right from the start. With its very high power density, the Multi Duored technology is convincing as a result of its compact design and the reduced costs per kW. Furthermore, the length of the drive train can be reduced significantly. 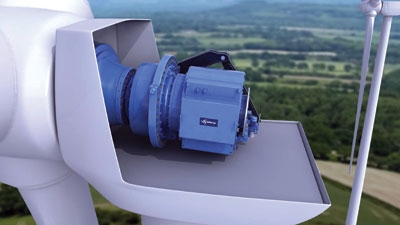 A compact gearbox design is suitable for all nacelle configurations. (Source: Winergy)

Another aspect that catches the eye right from the start is the fact that the Multi Duored is equipped with two parallel output shafts as it is coupled to two generators instead of one, as is generally the case for conventional designs.

Primary rotary motion is transferred from the input shaft through an eight-fold torque distribution. In three more stages the output speed with a gear ratio of 140:1 is generated for the two generator output shafts.

Using two generators has advantages. The use of smaller units in the generator area allows the total length of the drive train to be slashed by 35% when compared with a conventional 5-MW drive train. Furthermore, both generators have lower power outputs. Therefore, generators of existing power ranges can be utilised instead of developing a multi-megawatt generator, which first needs to be prototyped and therefore represents a higher risk.

The general setup of the Multi Duored does not include a planetary stage and almost all of the smaller components, such as bearings, gearing and castings are identical due to the eight-fold power split. The smaller size and weight of these components means that the capacity limits of the nacelle cranes are not exceeded, so no external equipment is needed to service single components. The small size of the gearing and bearings also means that these parts can be manufactured worldwide. And, when stocking spare and replacement parts the complexity is reduced to a minimum. The compact design of the individual parts also increases the stiffness of the gearbox as a whole.

It is also possible to achieve a higher efficiency for one of the two generators, while the other is operated with a low power. This allows the optimum efficiency of the wind turbine to be achieved.

A 6.5-MW version of the Multi Duored was created as a result of the challenge to install a drive train with higher power rating in an existing nacelle and a 12-MW version could be designed to address future market demands. Indeed, the advantages of the design are not diminished by increasing the power rating but are rather increased as a result of the higher savings relating to weight and size in comparison with conventional gearboxes.

The first company to utilise this new kind of drive train in its wind turbine was BARD, which has installed two prototypes with the 6.5-MW Multi Duored gearboxes. In those prototypes the nacelles are identical to those of the 5-MW conventional design, but they have now been equipped with the 30 percent more powerful drive train.

Taking a quick glance at the HybridDrive (HD) gives the impression that the HD is similar to a regular 3-MW gearbox. But this impression is wrong. A more detailed examination reveals large power cables, indicating that there is more inside than just a gearbox. It is a gearbox and a generator in a single unit.

The main focus of the HybridDrive is its compact design. The two-stage gearbox is directly connected to the permanent-magnet generator, allowing the overall length of the drive train to be reduced by about 35% compared with typical systems.

Its compact dimensions offer various advantages. For instance, it is possible to utilise the space saved for the converter and transformer, instead of locating these in the tower. This reduces the low-voltage cable losses. Furthermore, any configuration is possible — it does not matter if the drive train has one main bearing or two, or if the transformer and converter are placed within the nacelle or not. Depending on the concept, the tower costs can also be reduced as a result of the reduced top head mass and transportation is easier with smaller nacelle dimensions. 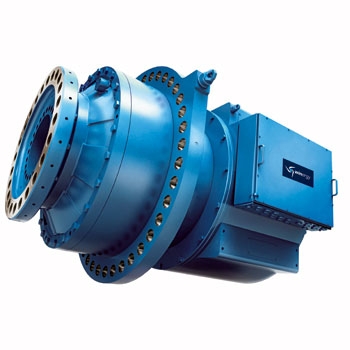 A 3-MW HyridDrive drive train is as long as a typical 3-MW gearbox alone (Source: Winergy)

Maintenance was taken into account in the early design phase and the HybridDrive has a modular design, enabling individual parts to be disassembled or replaced. The service crane of the nacelle can lift the individual modules, so that even when a major service is necessary, there is no need for an external crane.

The HybridDrive concept also uses only 20 percent of the quantity of rare earth materials that are required for a direct drive. As a consequence, dependency on one particular raw material is considerably lower, and costs can be more easily calculated over the long term. Since the sourcing and production of rare earth materials are currently still under discussion, it is also possible to design the HybridDrive without any permanent magnets at all.

The first prototype of the HybridDrive has an output of 3 MW and is intended for use in an onshore turbine. The concept can, however, also be easily implemented for the 6-7 MW power range.

Introduced in 2011, the HybridDrive will be employed for the first time in the Fuhrländer FL 3000 wind turbine system, the result of a long-term partnership between Winergy AG, Fuhrländer AG and Wind to Energy GmbH (W2E). It is to be completed this year.

The Multi Duored drive train concept and the HybridDrive are examples of innovative development in the wind power industry with the aim of making wind power more efficient, reliable and competitive. Wind turbine OEMs have to decide which factors are most important: efficiency, maintenance or low initial costs. In the end, such concepts help to reduce overall life-cycle costs, no matter which factor is most important.