One of the up-to-now unproven things preventing further growth in the wave-tidal-current energy industry that is developing the ability to turn the kinetic energy of moving water into electricity (hydrokinetics), which could supply 10%-to-25% of the nation’s electricity, is its safety in the underwater environments where it must necessarily live.

The Federal Energy Regulatory Commission issued a license to Hydro Green Energy (HGE) to install the first U.S. hydrokinetic turbine to capture the flow of the Mississippi River and turn it into electricity in December 2008. The license required a “Fish Entrainment and Survival Monitoring Plan.” ::continue:: 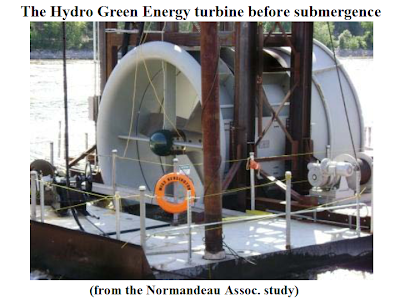 A Fish Survival and Injury Study of tagged fish that passed through the flowing waters captured by the HGE current energy turbine between June 5 and 11 was completed on June 13, 2009, with careful attention to proper tagging and handling methods and estimates of fish survival, injury and predation.

Summary of results: The evidence suggests a mortality of 193-to-636 fish per year due to entrainment of fish caught up in the water flowing past and through the turbine. Mortality of game fish by entrainment into the HGE hydrokinetic turbine is estimated at 4-to-12 white bass, 1-to-5 channel catfish, and 0-to-2 largemouth bass per year per turbine.

Conclusion (the scientific way to describe this result): The HGE river current turbine has had “little if any considerable impact” on Mississippi River fish. populations in the vicinity of the Mississippi Lock and Dam No. 2 Hydroelectric Project. 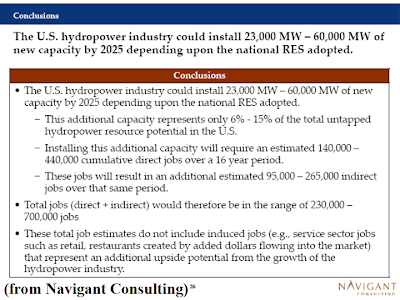 This landmark study demonstrates that fish, which regularly frustrate a segment of the population that can think of nothing better to do in this nation’s protected paradises than pursue them with a stick and string, also have the instincts to avoid getting chopped up in whirling blades along their way. ::continue::

Experts who have studied the hydrokinetic potential in U.S. oceans, lakes and rivers estimate there is up to a quarter of the nation’s power consumption available. That free, clean electricity near the coastal population centers where it is needed most, is now demonstrated likely to do little harm to the marine populations into which it must be built.

Next the hydrokinetic energies (wave, tidal and current) must demonstrate their capacity to cohabit with humans although, since they have so much to gain from the relationship, it might be incumbent on humans to work a little at the relationship. 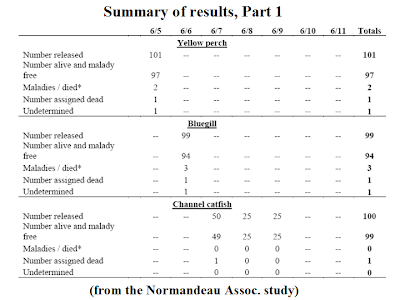 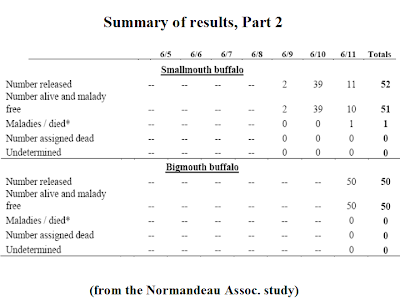 This post is based on An Estimation Of Survival And Injury Of Fish Passed Through The Hydro Green Energy Hydrokinetic System, And A Characterization Of Fish Entrainment Potential At The Mississippi Lock And Dam No. 2 Hydroelectric Project (P-4306) Hastings, Minnesota; Final Report, December 2009, Normandeau Associates