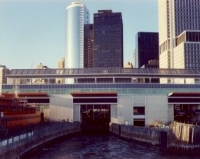 For the Whitehall Ferry Terminal, 288 solar electric glass panels — manufactured at Atlantis’s two factories in Poughkeepsie, NY, and Exmore, Virginia — form the exterior of the terminal’s facade and canopy. The 40 kW solar electric arrays will produce annually 52,000 kWh of clean, reliable power for the building. The design, covering more than 8,000 square feet, generates electricity and allows sunlight to stream through the canopy panels, providing daylight to interior areas. The installation process, which was interrupted by the events of 9/11, was performed by W.W. Glass and 5 Star Electric, both of New York. Magnetek Aurora and SMA Sunny Boy inverters were used to complete the project. “Atlantis Energy Systems is proud to work with NYC to bring the benefits of clean, reliable solar power to all New Yorkers and everyone who loves NY,” said Atlantis’s national sales manager, Joe Morrissey. The Terminal, a NYC icon, was originally constructed in 1907 and rebuilt in 1954. It experienced a fire in 1991 that damaged the roof canopy. A decision made by the Terminal’s owners — the NYC Economic Development Corporation and the Port Authority of NY/NJ — was to renovate the structure to respond to concerns about energy stewardship by making the south-facing building facade and canopy out of energy-producing solar-electric construction materials. “Over its life, the system will eliminate the production of 800 tons of the most significant green house gas, carbon dioxide”, said Jerry Sorgento of New Jersey based New Age Solar who commissioned the system for the owners. New Age Solar will be installing a power production monitoring system that will allow people to see online how much energy the system creates.