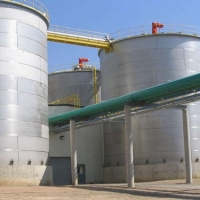 California, United States [RenewableEnergyWorld.com] At first glance, it might look like oil companies are pulling out of renewables. At the end of June, BP closed its alternative-energy headquarters. The oil company also has cut its alternative-energy budget and closed several solar factories in Spain. And that’s after Shell sold off most of its solar business at the end of 2007. But while solar might not have been the best fit for the petroleum industry, analysts say that oil companies might be better-positioned in renewable fuels – and are seeing some obvious signs of movement into the area.

One of the biggest is ExxonMobil’s announcement last week that it will invest more than $600 million in algae-based biofuels, with more than $300 million going to Synthetic Genomics. Of course, oil companies have previously invested at the research level, such as when BP announced it would invest $500 million — over a decade — in a research consortium led by the University of California at Berkeley in 2007. But Michael Butler, CEO of investment bank Cascadia Capital, said that starting last fall, about when the economic downturn began, he began seeing more activity in the business of renewable fuels as well.

Some examples? U.S. oil company Valero Energy Corp. in March won court approval to buy seven ethanol plants — and one partially completed plant — from VeraSun Energy Corp. Earlier this month, Redmond, Wash.-based Prometheus Energy, which converts waste methane into liquid natural gas, said it raised $20 million from the Shell Technology Ventures Fund and Black River Asset Management, a subsidiary of the agricultural giant Cargill. And in February, Conoco opened an ethanol fuel-blending station in Kansas in partnership with ICM, Poet and Crescent Oil. Conoco and Tyson Foods in May suspended plans for a plant that would have made biodiesel from animal fat, but DTN Research analyst Rick Kment said Conoco is considering buying a biofuel plant on the East Coast.

One reason for these investments is that the recession — along with the hard times for the ethanol and biodiesel industry — has led to great deals for biofuel assets, Kment said. Valero was able to acquire VeraSun assets for a mere 30 percent of the estimated cost of building the plants, and similar opportunities may be available. In February, Archer Daniel Midlands told analysts that nearly 21 percent of U.S. ethanol production capacity had been shut down, meaning that plenty of defunct assets could be up for grabs.

Kment said he expects to see more examples of oil companies buying ethanol and biofuel plants to meet that standard. After all, the renewable fuel standard calls for 36 billion gallons of biofuel to be blended into transportation fuels by 2022, up from 9 billion gallons last year. At today’s low prices, it makes sense for blenders to buy biofuel assets as a hedge against higher prices in the future, Kment said. “At this point, companies are looking at this as economical and a good investment,” he said. “The value of these plants are at nickels or dimes on the dollar, so [oil companies] have an opportunity to lock up a portion of their blending needs of biofuels … and hedge their overall cost in case the overall supply becomes tighter in the future.”

Kment sees oil companies spending more money at the asset-acquisition level than at the startup stage. But even those smaller startup investments represent a significant trend at a time when many venture capitalists and private-equity investors are pulling back, Butler said. “They’re filling a void in the marketplace,” he said. “Oil companies have the [technological expertise] to get really deep into this technology. So they can afford to take these bets and take on some of this risk.”

Many renewable-fuel technologies have turned out to be harder to fully commercialize than startups expect. (It took Prometheus Energy, for example, an extra 1-plus year to get up and running. The company was delisted from the London AIM exchange last year, before scoring its funding round.) But even though financial investors have been burned by the significant amount of capital and secure distribution channels that it takes to make biofuels successful, those same factors could give oil companies an edge, Butler said. In fact, several of his clients are currently in discussions with big oil and gas companies. “It’s just a natural fit,” he said. “Big companies bring the distribution and [scale], and startups bring the technology and the innovation.”

In any case, all the investments signify that the petroleum industry “really looks at biofuels as a stable part of the industry,” Kment said. “Whether they like it or appreciate it or not, they see it as being part of the [fuels] industry and one of the things needed to [do business] in the United States.”

Butler agrees that it’s a milestone for biofuels. “My gut [feeling] is that oil companies understand that, at some point, they’ve got to get into renewables,” he said. “I’m not really sure they’re going to develop the products in their own companies, so it probably makes more sense for them to go outside. If the technology ends up working, this could be very, very synergistic.”

The trend of oil companies expanding from buying to also producing biofuels could significantly grow the industry, analysts said. Renewable fuels is certainly a better fit for oil companies than solar power, said Ron Pernick, a principal at research firm Clean Edge. “They didn’t know [solar] manufacturing, didn’t have the distribution channels for something like a solar panel — it didn’t fit their gestalt or their DNA,” he said.

Alternative fuels could make far more sense because they tie more closely to oil and gas companies’ core business, he added. “Here is a business where a lot of biofuel tech companies have tried and failed, and maybe that wasn’t the right fit for them,” he said. “I think if anyone can crack this nut, it’s probably the chemical and oil and gas guys.”