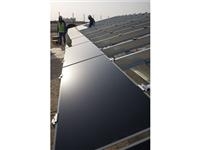 Abu Dhabi [RenewableEnergyWorld.com] The second World Future Energy Summit in Abu Dhabi opened on January 19. An estimated 15,000 delegates are expected at what the German State Secretary for the Ministry of Environment, Matthias Machning, referred to as “the Davos of the Energy World,” a reference to the annual, highly influential economic summit held in Davos, Switzerland.

The Government of Abu Dhabi announced on the eve of the conference that it is setting a goal of 7 percent of the country’s power to come from renewable energy by 2020. Much of this will be created by the flagship Masdar initiative. As well as responsibility for the construction of Masdar, a large, carbon-neutral city being developed in the Emirate, the Masdar Initiative is investing large sums of money in other renewable energy initiatives.

So far, the Masdar city project has procured US $300 million of equipment and services, and expects to procure over US $1 billion by the end of the year. The project has also invested funds in other renewable energy projects, such as the London Array of offshore wind in the UK, and Finnish wind energy company WinWind.

Speaking at a press conference Ziad Tassabehji, director of asset management and Utilities for the Masdar Initiative, a Government-funded project, confirmed that almost all of this 7 percent target will come from solar energy. The Emirate expects power demand to be between 20 and 22 gigawatts by 2020, and with a maximum wind resource in the region of 100 megawatts, that will leave well over 1 gigawatt to come from solar power.

The 7% figures was the maximum they expect to be possible in the timeframe. He also explained that this will come from a range of different technologies, particularly solar thermal power and PV, but at this stage the team did now know what the actual mix was likely to be. The Masdar team were also insistent that the current economic downturn would not affect the target or the investment. They see the Masdar project as catalysing and facilitating the necessary US $6-8 billion investment to achieve the 7 percent target by 2020 but expect to see contributions from other companies both through joint ventures, and as completely separate projects as well.

For an inside look at Masdar City, play the video below.