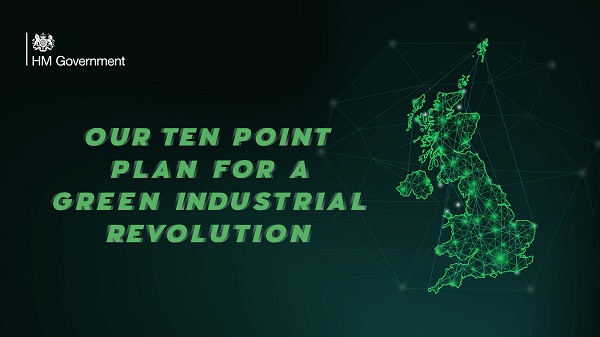 The strategy is designed to boost jobs and ‘level-up’ the country in terms of driving business and employment across all regions.

“Our green industrial revolution will be powered by the wind turbines of Scotland and the North East, propelled by the electric vehicles made in the Midlands and advanced by the latest technologies developed in Wales,” Johnson said today.

Highlights in the plan include moves to heat a whole town from hydrogen by the end of the decade, and banning the sale of petrol and diesel cars by 2030 – ten years earlier than previously planned.

The government also plans to pump millions of pounds of investment into carbon capture and storage and developing nuclear power, both large scale and, especially, small modular reactors.

Here are the ten action points in full:

Offshore wind: The UK – already the world leader in offshore wind – wants to produce enough offshore wind to power every home by 2030, which would mean quadrupling current capacity to 40GW in the next decade.

This builds on a target unveiled last month for floating offshore wind in the North Sea to deliver 1GW of energy by 2030, which is over 15 times the current volumes worldwide.

There is also a pledge to double the capacity of renewable energy in the next Contracts for Difference auction, which will open in late 2021;

Hydrogen: The government will work with industry to generate 5GW of low carbon hydrogen production capacity by 2030 for industry, transport, power and homes and invest £500 million to make this happen. Included in this is the creation of a pilot project that will ultimately see tens of thousands of homes using hydrogen for cooking and heating.

Carbon capture: Johnson wants to UK “revitalise the birthplaces of the first industrial revolution” and put the UK “at the global forefront of carbon capture, usage and storage technology, benefiting regions with industries that are particularly difficult to decarbonise”.

An extra £200 million of new funding has been found to create two carbon capture clusters by the mid-2020s, with another two set to be created by 2030. These clusters are likely to be in England’s northeast, northwest, Scotland and Wales.

Electric vehicles: The Prime Minister has announced £1.3 billion to accelerate the rollout of chargepoints for EVs in homes, streets and motorways across England, plus £582 million in grants for those buying zero or ultra-low emission vehicles to make them cheaper to buy and incentivise more people to make the transition.

The government says it will spend nearly £500 million in the next four years on the development and mass-scale production of EV batteries.

Homes and public buildings: A target to install 600,000 heat pumps every year by 2028 I at the centre of a bid to make homes, schools and hospitals more sustainable and energy efficient;

Jet Zero and greener maritime: Supporting difficult-to-decarbonise industries such as aviation and shipping to become greener through research projects;

Nature: Protecting and restoring our natural environment, planting 30,000 hectares of trees every year, whilst creating and retaining thousands of jobs.

Innovation and finance: Developing the cutting-edge technologies needed to reach these new energy ambitions and make the City of London the global centre of green finance.

Johnson – who is currently self-isolating because of contact with a colleague who has coronavirus – said the action plan marks the beginning of the UK’s path to net zero as it prepares to host the international COP26 climate summit in Glasgow next year.

“Although this year has taken a very different path to the one we expected, I haven’t lost sight of our ambitious plans to level up across the country. My Ten Point Plan will create, support and protect hundreds of thousands of green jobs, whilst making strides towards net zero by 2050,” he said.

This article was first published by Power Engineering International and was reprinted with permission.