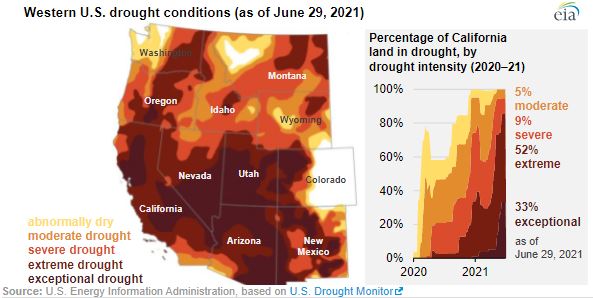 As a result of harsh drought conditions in California in 2021, the U.S. Energy Information Administration expects the state’s hydroelectric generation to be lower in 2021 than it has been in recent years.

Most of the western U.S. is experiencing intense and historic drought conditions. California is one of the most severely affected states. As of June 22, 2021, 100% of the state is experiencing some degree of drought. About 33% of the state has been categorized under exceptional drought, the most intense classification. The drought conditions have affected California’s water supply levels and hydropower plants.

Mountain snowpack serves as a natural reservoir, providing water throughout the spring and summer as it melts. However, the California snowpack was well below normal this year, and most of it melted quickly because of higher spring temperatures. Measurable snow was present at only three of 131 monitoring stations on June 1.

Meltwater from the snowpack often didn’t reach reservoirs in California this year because it was absorbed by drought-parched soil and streams, leaving reservoirs at low levels. Shasta Lake, the largest reservoir in California, is at 48% of its average capacity. Lake Oroville, the second-largest reservoir in the state, is at 40% of its average capacity. Lake Oroville’s water level is expected to fall even lower, which will likely force the 645-MW Edward Hyatt Power Plant to shut down for the first time since it opened in 1967.

California’s previous drought, which lasted from 2012 to 2016, led to significant declines in hydroelectric generation and the state’s first-ever mandatory water restrictions in 2015.