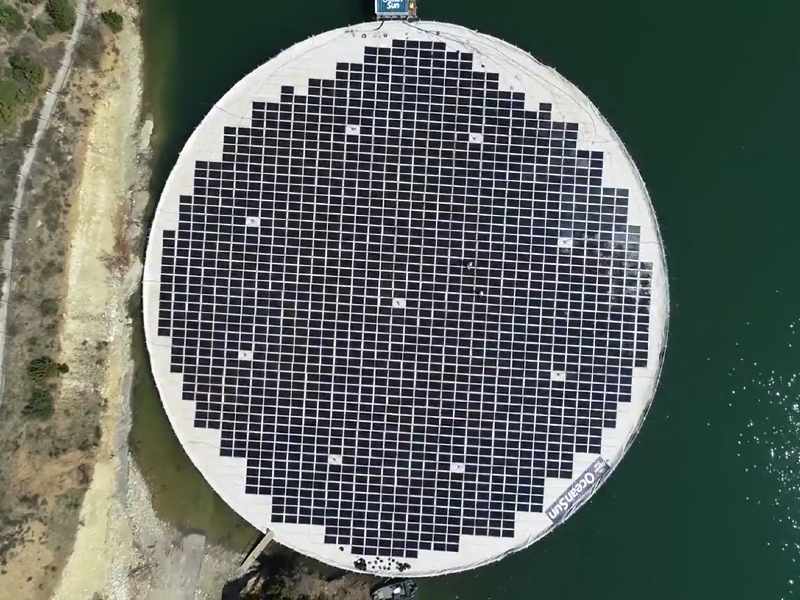 The project is placed at the Banja reservoir in Albania, where Statkraft is operating its 72-MW Banja hydropower plant. After the successful completion of the first floating solar unit and connection to the grid, the plant is now generating renewable energy and injecting the power into the Albanian national electricity grid.

The first unit, comprising 1536 solar panels, has an installed capacity of 0.5 MWp and covers almost 4,000 square meters. In addition, 160 equal panels have been placed on land for comparison and documentation of the cooling effect on the floating panels.

The project is unique as it uses Ocean Sun’s patented membrane technology. The solar modules are mounted on hydro-elastic membranes and offers cost and performance benefits not seen in many other floating PV systems.

The project is expected to continue its second implementation phase during the second half of 2021, whereby additional three floating units will be installed, with a combined additional capacity of 1.5MWp.

“After the start of commercial operations of our Banja and Moglice hydropower plants, we are looking into further optimising these renewable assets. The Banja Floating Solar Plant is a concrete example for further integration of different resources of renewable energy,” says Rigela Gegprifti, Statkraft’s country head in Albania.

Floating solar power involves installing solar panels on floating structures on a body of water, such as a lake, fjord or ocean, or in a hydropower reservoir. Each unit consists of a floating ring and a thin membrane. Combined with the cooling of the panels from the water below, it is this membrane and the large area that makes this concept unique. The technology is developed by Ocean Sun and although the membrane is only a few millimeters thick, it can easily withstand the weight of the solar panels and of personnel carrying out installation or maintenance tasks.

“We are very pleased to start commercial operations of the new Ocean Sun flagship floater at Statkraft’s Banja reservoir. This demonstrates the safe, simple and fast construction methodology. We were able to install the solar panels at record breaking speed… We look forward to the second stage of the project and to demonstrate the high performance of our solution,” says CEO of Ocean Sun, Børge Bjørneklett.

According to Statkraft, Albania has one of the highest shares of renewable energy in Southeast Europe. Hydropower accounts for the largest share of Albania’s electricity generation, representing around 95% of its installed power capacity. In addition, Albania has some of Europe’s highest number of sunshine hours per year, presenting significant potential for the development of solar power and a good fit with existing hydropower capacity.