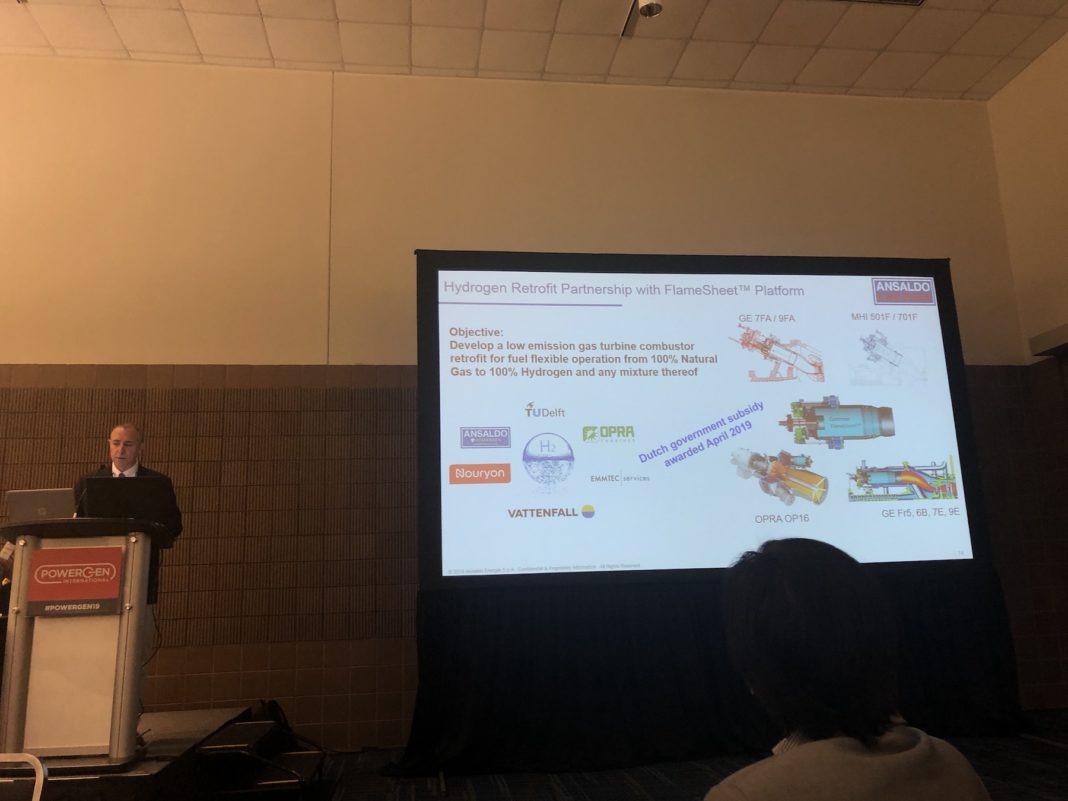 On Tuesday during POWERGEN International, representatives from Clarion Energy, Ansaldo, NEL Hydrogen and MAN Energy Solutions discussed the future role of hydrogen in the power industry at a session sponsored by the Italian Trade Agency.

The future is very bright, according to the speakers.

Following Benoit’s focus on turbines, Steve Szymanski with Nel Hydrogen stepped up to the podium to show the audience how his company’s proton exchange membrane (PEM) electrolyzer works and talk about some of the projects that the company is involved in. PEM electrolysis is a technology that splits water into oxygen and hydrogen.

He said his company is scaling quickly.

“We are trying to keep pace with the demand for power-to-gas use cases that we see in the pipeline,” he said.

Szymanski said that electrolyzer costs are falling along the same trajectory that solar PV followed. “The cost of electrolyzers are not going to be a barrier,” he said.

Szymanski added that there is great interest in hydrogen from the heavy-duty industry and pointed out that Nikola motor, maker of heavy-duty trucks, plans to roll out a large fleet of hydrogen powered trucks in 2022. He said they have an order for 800 heavy-duty trucks for Anheuser Busch.

“We are looking at a demand of more than 1 GW with this one customer alone,” he said.

Dr Ing Florian Gruschwitz from MAN Energy Solutions said his company has “hydrogen in our blood.”  He explained that hydrogen will be an important part of decarbonizing the industrial sector.

In April MAN Energy Solutions took a 40 percent share of the electrolysis technology company H-TEC Systems in order to position itself as a hydrogen provider.

“The ambition around hydrogen is enormous,” he said.

Paddy Young, event director for POWERGEN Europe owned by Clarion Energy, moderated the panel and referred to himself as an enthusiast in the technology.

Europe is heavily investing in hydrogen as a means to decarbonize the entire industry – not just the electricity sector – and Young said he was pleased to see that the interest is strong here in the U.S., too.

Indeed, there were so many attendees at the session that more chairs needed to brought in so people would have a place to sit.

“This is a compelling story,” he said.