At first blush cars that drive themselves have little to do with the fight for a renewable future.

I think of Google as the Intel of this effort because Google’s networks connect people to information, and to one another, and because Google has the money to indulge young innovators. Google has been in the robotic car space since last year, building on the work of Stanford professor Sebastian Thrun, who won a DARPA prize in 2005 by navigating an unmanned car across the California desert. (Thrun has also added intelligence to walkers and Segways).

Now Google has 7 of these vehicles, using systems people can override instantly, in northern California, and is lobbying Nevada to make them legal there. Google employees have driven 150,000 miles in this fleet of robotic Priuses.

Thrun believes that we can save billions on infrastructure using robotic cars, because roads filled with them can have the cars driving closer together. Robots don’t get drunk, they don’t get distracted by cell phones, and they don’t try to get to work while eating McDonald’s or doing their make-up.

What connects this to you is where Thrun spoke. The Maker Faire. 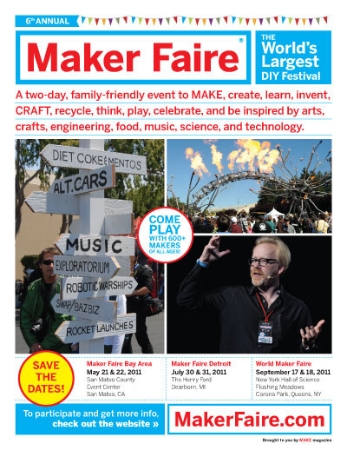 As shows go, the Maker Faire is a small one. This year’s main event was held over the weekend in San Mateo, a 100,000 square foot fairgrounds. The big celebrities to this crowd are people like Adam Savage of Mythbusters and Mike Rowe of Dirty Jobs. Google is a sponsor. O’Reilly Publishing is the owner. (There will be two more Maker Faires later this year, at Detroit’s Henry Ford Museum in July and New York’s Hall of Science in September.)

The Maker Faire is bidding to become the West Coast Computer Faire of this generation, or maybe its Comdex. For those too young to get the reference, the Faire was the brainchild of Jim Warren, it started in 1977, and it helped popularize personal computing in the late 1970s. (Comdex turned Sheldon Adelson into a multi-millionaire, and he has since parlayed that money into billions through the Sands, which he originally bought as extra space for the show.)

O’Reilly’s Tim O’Reilly has been on the cutting edge of the future for 20 years, and I’m proud to call him an acquaintance. He publishes deep books on technical subjects (many with cute drawings of animals on the covers), he had one of the first online guides to the Internet, but his remains a modest niche, and he likes it that way.

There is a true intersection between making and renewable energy, and this intersection is going to become more obvious with time. The impulse to create something new, to invent, to gain mechanical knowledge as well as computing knowledge, is one of the big stories of our time. The skills gained in shows like Dean Kamen’s USFirst can be applied through a display at a Maker Faire and groom thousands of new workers for engineering both large and small renewable projects.

One big question a lot of us are asking right now is, who will be the Steve Jobs of renewable energy? Who will turn this from a niche industry to a mainstream phenomenon?

I can’t give you a name, but I know where he was last weekend. He (or she) was in San Mateo, listening to Sebastian Thrun. At the Maker Faire. (Or maybe they’re just reading about it somewhere, like here.)