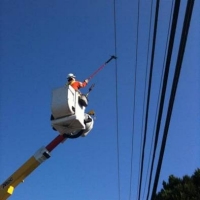 SAN FRANCISCO — Stealing electricity costs not only utilities but also the consumers who help to pay for the costs of producing and transporting power. A startup called Awesense is using sensors and data analytics to help utilities detect energy theft and improve the efficiency of the grid.

The company, founded in 2009 and located in Vancouver in Canada, recently signed up a U.S. utility that agreed to use Awesense’s new sales model, said Mischa Steiner-Jovic, CEO of Awesense. Instead of selling the equipment and software outright, Awesense can finance the equipment installation and data crunching and make money by getting a percentage of the revenue that comes from stopping the energy theft or charging a fee. Steiner-Jovic declined to disclose the name of the utility that has opted for the service contract.

Power companies in Malaysia, Turkey, Bulgaria and the Czech Republic also plan to carry out trials of Awesense’ technology starting this quarter, he added. Fortis BC in British Columbia is one of its customers.

About $220 billion worth of electricity gets lost annually because of theft or technical problems with the grid, according to a report by the World Bank in 2009. Most of the losses aren’t due to technical problems, though. Energy theft is a big problem in India: about 27 percent is diverted illegally, according to its government. Theft amounts to $6 billion per year in the U.S., according to the same report.

“Most power thefts bypass the meters, so it’s difficult for utilities to determine where they are occurring,” Steiner-Jovic said.

The startup’s technology consists of portable sensors that are about 10-inches tall by 1-inch wide and 4-inches deep and weigh less than a kilogram each. Utility workers can clip them onto wires, where the sensors would measure the current and calculate the energy (in kilowatt-hours) that flows through the line. Through the startup’s own wireless network, the data goes back to Awesense’s data center for analysis and are accessible by its utility customers.

The amount of sensors and how closely they are to one another depend on what a utility wants to accomplish. If it wants to simply monitor the energy flow to a line that serves, say, 100 homes, then it could install one sensor on that line. If it wants to pinpoint more precisely where energy losses are occurring, then it would move sensors around or add more of them to home in on the cause, which could be theft or technical problems.

The data gives a utility good figures on how much energy flows through and is used in a particular area, Steiner-Jovic said. Otherwise they figure out overall losses based mostly on numbers that show how much power they’ve generated or bought and how much they have sold.

Because Awesense’s equipment takes stock of the energy flow and demand, it also could help utilities figure out where they need to add new distribution lines or install power generation equipment, such as solar energy systems, to feed the demand.

By selling its services rather than its equipment and software, Awesense can serve utilities that don’t want to invest the capital or hire employees to manage the sensor and data collection. It also reduces risk for utilities, which are known to take a while to adopt new technologies and would likely prefer to buy a service rather than invest in equipment from a startup that may not stick around long enough to provide maintenance and fulfill warranties.

Awesense raised its first equity round last year, but Steiner-Jovic declined to say how much.

Embodied carbon vs operational carbon: What’s the difference, and why does it matter?