A new report on energy efficiency could be the key to breaking the logjam in Congress on energy and climate legislation.

Somebody needs to slip Energy Efficiency in the South, by researchers at Georgia Tech University working on behalf of the Southeast Energy Efficiency Alliance, under the Oval Office door so the President can see that it gets to the contingent of Southern Senators who have so far managed to obstruct his administration’s effort to write climate and energy legislation on the grounds that such a bill would do their states economic harm.

Report after report has emerged in the last 2 years demonstrating that the fastest transition to a New Energy economy is via a major emphasis on Energy Efficiency. At the same time, the recession and the rising cost of energy have set state and national leaders looking for ways to reduce expenditures, increase revenues and grow jobs. The economic cause has been enthusiastically embraced by those fighting climate change as a means to reduce greenhouse gas emissions (GhGs).

Previous studies have demonstrated the great value of Energy Efficiency for individual Southern states (see this on North Carolina and this on Texas). This study is uniquely important because it shows how an aggressive move to Energy Efficiency will bring net new jobs and significant revenues to states across the entire Southeast. If there are any Southern Senators looking for an excuse to move away from the Old Energies and take up the cause of the future, this study gives them an excuse to do so. ::continue::

The report offers extensive detail on how much can be gained by the generation of Negawatts (the watts saved from energy not used). Not only are negawatts the cheapest source of New Energy but investing in the Energy Efficiency that produces them saves $2-to-$3 dollars for every dollar that is spent, savings that can be invested in New Energy megawatts. 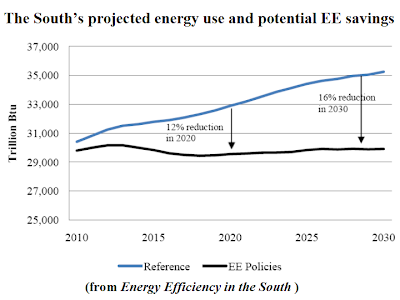 The report’s primary and well-documented research offers detail on the South’s Energy Efficiency (EE) capacities in the residential and commercial buildings and industry (RCI) sectors and identifies the EE policies that will drive their development. It uses an unprecedentedly rigorous computational model that applies accurately to the many states across the South. It concludes with 4 major findings.

(1) Aggressive EE initiatives in the Southern states could significantly eliminate the growth of the RCI sectors’ energy consumption from 2010-to-2030.

(3) Huge gains in jobs and cuts in energy costs would come from the 9 EE polices.

(4) The 9 EE policies would cut water consumption used for cooling by about half.

Bottom line: Implementation of the 9 EE policies would require an investment of ~$200 billion and create savings of ~$448 billion. It’s really that simple, in dollars and common sense, though certainly it will be a challenge to win political support and implement the changes.

Because the report is so thorough and authoritative, the jig is up for the South’s political opposition to national energy and climate legislation. The South has an enormous opportunity, bigger than anything the coal industry, its longtime master, can offer. It is time for these modern-day slaves to the Old Energies to answer the call of their heritage and rebel. 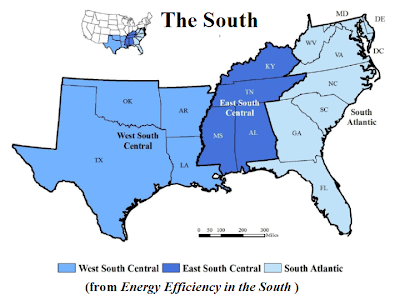