The place where all the concerns and possibilities of the coming New Energy economy meet is called Energy Efficiency. Energy Efficiency offers a faster and more accessible path to meeting rapidly rising energy demand, providing energy security in an ever more dangerous world and addressing global climate change. It also offers jobs the sluggish economy urgently needs and the energy-cost savings that can fund the buildout of New Energy.

Despite the highest hopes of New Energy advocates and developers, installed capacity growth on a big enough scale to meet unchecked rising world energy demand in the near term could only happen with a massive and sustained commitment. Such a commitment will not come in industrial societies where Old Energy’s vested interests refuse to give way.

In the absence of such a massive commitment, Energy Efficiency is the necessary and best alternative. Energy Vision Update 2010; Towards a More Energy Efficient World describes the world’s renewed commitment to Energy Efficiency, the most redeeming feature of an otherwise disappointing December international climate change summit in Copenhagen.

The fastest, cheapest way to make the biggest impact on the available domestic energy supply is with negawatts, the label energy visionary Amory Lovins gave to getting more output with less energy. Closing the efficiency gap between available and cost-effective options and the wasteful way energy is presently used will not only reduce the pressure on world resources; it will also save money, an estimated $2-to-$4 for every dollar spent. Those are dollars that can be invested in New Energy infrastructure. (Such a deal!) ::continue:: 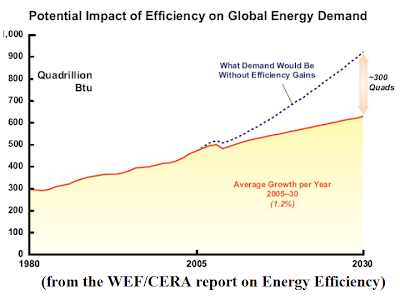 Even the most pessimistic scenarios about recovery and growth in Western industrial economies nevertheless foresee rising energy consumption around the world. Demand will be driven by, if nothing else, the continuing march out of poverty and into the middle class of billions of people in India, China, Brazil, Indonesia, Korea and Southeast Asia.

But even if the world had not already had enough of oil tanker spills and deadly coal mine disasters, it is becoming clear the Old Energy infrastructure – even augmented by the rapidly expanding capacities of the New Energies – cannot fully meet predicted levels of near-term demand without a complimentary expansion of Energy Efficiency tools and capabilities.

Happily, the advance of Energy Efficiency is happening around the world without the need for international agreements or leadership from the U.S. Senate (neither of which, it would seem, is within reach on this or any important topic). China is building new, high voltage transmission. South Korea is pioneering Smart Grid technology. And the entrepreneuers of silicon vallies from Massachusetts and California to Bangalore, their high tech toy sales dwindling and the realization rising that a world without adequate electricity is not one in which they can prosper, are turning with all their desperate passion to Energy Efficiency.

Hope, with springtime, is in the air. 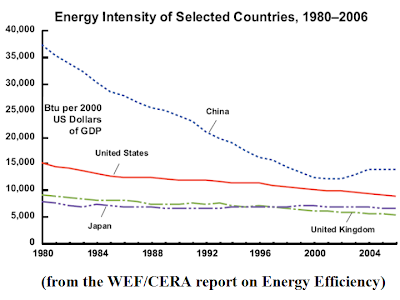