In the United Kingdom, and especially Scotland, where wave energy was first proposed in 1974, harnessing the power of the ocean is no longer a good business idea, it is a matter of national pride. Scotland has, by far, the most attractive feed-in tariff in the world (5 ROCs) and is hoping to attract companies from around the world to set up shop on its shores.

Already in the town of Blyth, the New and Renewable Energy Center is revitalizing a community that was rocked by the coal mine closures and the ailing shipbuilding industry. At this stop I met with Lisa Dodds, business development manager for offshore technologies and Jamie Grimwade, a marine technology specialist. They, much like the HRMC group at University College Cork, provide consulting expertise along with a wave tank to test different parts of a device. 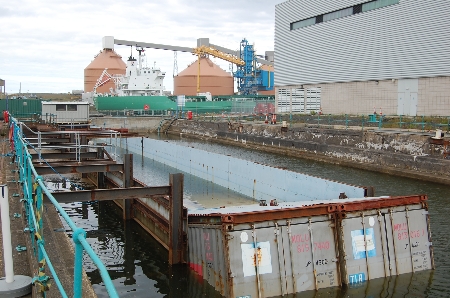 The wave tank outside of NaREC. At the far end of the tank are the flaps that generate the waves.

However, it was not until I ventured to Edinburgh, the birthplace of wave energy where I saw first-hand the importance of the wave energy industry. Being a tourist in a new city, I ventured into the National Museum of Scotland. Upon entering the museum, you are greeted with the following quotation in flowing, cursive English, “As long as one hundred of us remain alive, we will never on any conditions be brought under English rule.” As I pondered that thought while wandering around the museum, I made my way to the top floor where the “Modern Industry” exhibit was located. I soon ran into a video, featuring interviews with Richard Yem, a graduate of the wave energy group at the University of Edinburgh and one of the key figures in the startup of Pelamis, as well as Neil Kermode, director of EMEC. Below the video was a glass case, displaying a model version of Dr. Salter’s original duck. When I realized what I was looking at, I started laughing. I could not imagine after all the museums and tourist sites I had been to, I would actually see something related to wave energy.

The next day, I met with Jamie Grimwade, Dr. Salter’s original “right-hand” man, who has been with the University of Edinburgh on-and-off since the early 1970’s. While I was visiting the wave tank, an Italian group was there, testing a gyroscopic power-take off model. Meeting with the researchers at the University of Edinburgh was inspiring, to the say the least. Currently, they are involved in a project called Phase II of SuperGen Marine. This is a project funded by the Engineering and Physical Sciences Research Council (a division of the UK government) that started in 2003 with Phase I. There are many Scottish and English Universities involved, including Heriot-Watt University, Queens University Belfast, University of Strathclyde, and Lancaster University. They are currently working under a wave-to-wire model that was developed by the research performed in Phase I from 2003-2007. In Phase II, which received about 4 million pounds from EPSRC and lasts from 2007-2011, the work is broken down into 10 work streams, which focus on the various aspects of getting a wave energy device in the water. I had the pleasure of touring the department with Dr. David Forehand, a research associate who is working on advance control and network integration. Specifically, he is looking at the effects that devices will have on each other if they are placed in an array. Another interesting focus that Dr. Forehand told me about is the optimization of the design of a device using genetic algorithms. A genetic algorithm is kind of like theoretical artificial selection. In this process, a supercomputer comes up with a population of possible solutions for a wave energy device. Then, it runs a simulation to determine which designs are “good” and which are “bad. It selects the “good” ones, cross-breeds them, introduces some mutations, thereby coming up with another generation of possible solutions. Hopefully, this generation has superior designs than the previous one. Since this is an iterative process, it can go on for however long the designers wish. Clearly this university is the premier institution in the world to study this type of technology.

After Edinburgh, I made my way up to the Orkney Islands, where I met with Neil Kermode at EMEC, who I had seen just a few days prior in the video at the National Museum. He took me to the installation site near Stromness, where AquaMarine is currently installing their Oyster device in the waters just about 20 m offshore. For the first time since Denmark, I saw first-hand actual equipment in the ocean. There were cranes, construction workers, hard hats and an offshore rig that was installing the table, on which the Oyster device will sit.  Over the five weeks of my project, I learned that actual hardware in the ocean is rare for this industry. The Oyster will be attached to this table, allowing it a full range of motion. The device produces electricity when the flap moves back and forth with the waves, while the base of it remains stationary since as it is attached to the table. At the end of the summer, Pelamis Wave Power and Ocean Power Technologies will begin to install the moorings for their devices. Mr. Kermode has seen these the manufacturing of these devices and is excited for their arrival. There are four cables that run from the station on land to allow four different devices grid connections. EMEC is expanding their substation to house more electrical equipment, due to the low power quality that these devices will deliver. 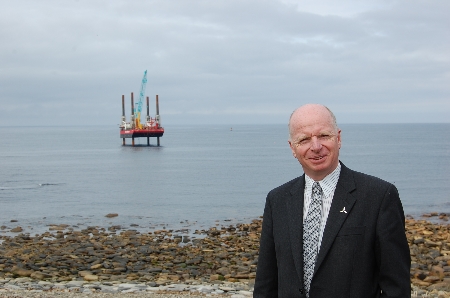 Neil Kermode, director of EMEC, with the Aquamarine installation rig in the background.

This country was the first to conceive of wave energy and still is the world leader in this industry. On the 8-hour train ride back down to Edinburgh, where I caught a flight to Dublin and then back to New York City, I came across an interesting article in a Scottish newspaper. The UK Parliament had just allocated tens of millions of pounds to wave energy, but most of the money went to the Wave Hub, another test site offshore of Hayle, in southwest England. The Scottish people were outraged that the UK Parliament would give such a sum of money to an upcoming English test site, instead of the established test site in Scotland. We shall see how this controversy unfolds. I would not be surprised if Scotland secedes from England.