Ireland hopes to become a country that will be known for its dominance in the marine renewables sector very soon. This country has not historically produced brilliant engineers or scientists, but the government and the people of Ireland are sick of being dependent on foreign oil imports. In 2005, just over 90% of their energy consumption came from energy imports (International Energy Agency). Furthermore, 60% of this energy comes from oil (International Energy Agency). As you can imagine, Ireland was not blessed with abundant marine and terrestrial life during the Carboniferous Period. They are, however, blessed with nearly 525 TWh of total wave energy, with an “accessible” wave energy resource estimated at 21 TWh (Sustainable Energy Ireland). For comparison, the total amount of energy consumption for electricity in Ireland in 2006 was 27.8 TWh (Sustainable Energy Ireland). It becomes obvious to anyone who has lived through the oil prices spikes and troughs of the past 30 years, or even just last summer, why Ireland would want to develop marine energy devices.

After talking to three Irishmen: a self-proclaimed “economist who went fishing,” the longest active wave energy researcher outside the UK, and an engineer who has dealt with complex problems such as driving efficiency, high blood pressure and currently wave energy devices, I believe that Ireland will have a wave energy device in the water before 2018.
I know some people may think that is too far in the future, while others (who may have been reading my blog) realize the multitude of challenges that must be overcome. The economist who I talked to is Eoin Sweeney, who now heads the Ocean Energy Development Unit at Sustainable Energy Ireland, a government-funded organization whose sole purpose is to increase renewable energy usage and energy consumption in Ireland. Dr. Tony Lewis, director of the Hydraulics and Marine Research Center at University College, published his first paper on wave energy in 1977. They both agree that the biggest challenges in Ireland are improving the electrical infrastructure on the western coast of the country and simplifying the permitting and licensing processes. 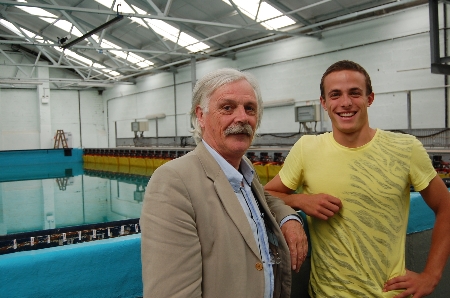 Standing with Dr. Tony Lewis at the Hydraulics and Marine Research Center at University College Cork. In the background is the wave tank that they use to test model devices. They can produce many different wave climates using the 40 or so paddles (the yellow objects in the water).

Already, the Electricity Supply Board, Ireland’s premiere utility, has started a project to reinforce the   lines to the western coast (www.esb.ie/main/downloads/about_esb/non_tech_summ.pdf). These projects take time, usually on the order of 5-8 years. Thus, large amounts of electricity will not be able to be transmitted from generation hubs to population centers until 2018 or so. In order to expedite the licensing and permitting process, Sustainable Energy Ireland is pre-assessing the entire western coast of Ireland to determine which exact locations are best suited for marine renewables development. This assessment will take into account various factors, including existing fishing hotspots, sensitive marine wildlife areas, wave resource and ease of connection to grid. By letting the licensing boards know in advance which areas are likely to be developed and providing them with a plethora of data, the time and cost of the permitting process should be greatly reduced. Thus, Ireland is taking all the right steps to getting a commercial device into the water.

While the Irish government is not as concerned about developing marine energy technologies, there are three companies that have devices in Irish waters. WaveBob (wave), OceanEnergy (wave) and Marine Current Turbines (tidal stream) are all at the pre-commercial stage. Ocean Energy has had a 1:4 scale buoy in the waters at a test facility in Galway Bay since December 2006. Three days after it was installed, the device survived a freak 25-year wave. WaveBob does not currently have a test device in the water but they plan to do so by the end of the year. MCT, based in Bristol, England, deployed its 1.2 MW device in 2008. On their website they have a screenshot of what appears to be a meter showing 1.2 MW being transmitted to shore. This company is certainly the worldwide leader in marine current technologies, and I think we should all keep a keen eye on these guys.