In her statement about the pastiche “spill bill” the Democrats will bring this week (containing reforms for offshore oil drilling, support for natural gas-powered trucking, funding for building efficiency retrofits and funding for land and water conservation), Browner spoke to the White House’s failure to sustain more meaningful energy legislation with a coded remark. “We will continue to use our existing tools to address these problems,” she said.

The message was to those who would not back a bill containing (1) a national Renewable Electricity Standard (RES) requiring regulated U.S. utilities to obtain 20-to-25% of their power from New Energy sources by 2020 or 2025 and (2) a cap on U.S. greenhouse gas emissions (GhGs) and a market mechanism through which major emitters can achieve reductions cost-effectively.

The message was this: If Congress does not legislate GhG reductions, the Environmental Protection Agency (EPA) will use its legal authority under the Clean Air Act, upheld in a landmark 2007 Supreme Court decision, to make life miserable for the major emitters and the Department of Transportation (DOT) will use its authority over tailpipe emissions to impose demanding standards on carmakers and state regulators will act regionally to reinforce the federal actions.

How – and how effectively – the EPA can act is detailed in Reducing Greenhouse Gas Emissions in the United States; Using Existing Federal Authorities and State Action, from the World Resources Institute (WRI). Anticipating difficulty in the Senate for action on climate change, WRI’s report explains how EPA and state governments can use legal powers and state regulatory processes to impact the U.S. GhGs that are widely viewed by climate scientists as causative in the abnormally accelerated increase in the global average temperature. ::continue:: 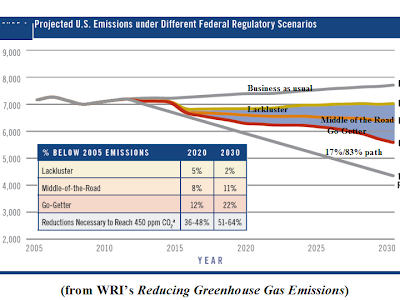 Browner’s code word is “tools.” It is used in the opening paragraph of the WRI report in exactly the same way: “Can the U.S. meet the Obama Administration’s Copenhagen commitment…using the regulatory tools already available to federal agencies, together with announced actions at the state level?”

The WRI report specifically addresses the potential of EPA and state regulator action to be effective enough to achieve the stated Obama administration goal of reducing U.S. emissions to 17% below the 2005 level by 2020. Can it?

According to the WRI, the answer is “it depends.” WRI proposes a Lackluster Scenario, a Middle-of-the-Road Scenario and a Go-Getter Scenario. A lackluster effort would achieve less of the reductions that are technically feasible. A middling effort would achieve reductions in the middle range of technical feasibility. An aggressive effort would likely put the nation on track to approach the Obama administration goals in the short-term, though the longer-term goal of an 83% reduction of GhGs from the 2005 level by 2050 cannot be achieved without legislatively instituting a cost for emitting.

Even before Browner’s coded threat, opponents of climate change action had introduced House and Senate legislation to alter the Clean Air Act so as to eliminate EPA’s authority. 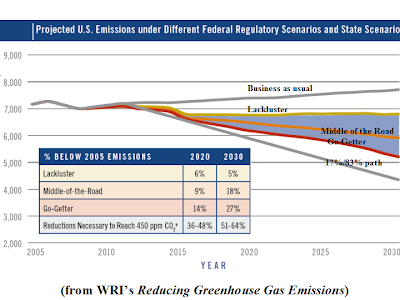