The Story of Cap & Trade, from Annie Leonard and the talented makers of The Story of Stuff, is spreading virally through the web and finding quick approval from folks who distrust the supposed complexities and Wall Street dangers of cap&trade.

Perceptive simplicity is always appealing and The Story of Stuff was very appealing and a superbly spot-on critique of wasteful Western materialism but this one is simply oversimplified.

Ms. Leonard gets her first point, the basic idea of the cap, exactly right: The cap in cap&trade is the crucial element that makes the whole concept so important. The first and foremost thing the world needs to do is set hard caps on greenhouse gas emissions (GhGs). ::continue::

But the trading part of cap&trade, contrary to the video narrative’s next assertion, is not any more of a scam than any other market. By the time cap&trade gets on the U.S. stage and goes worldwide, it will have many more checks and balances and regulatory protections built into it than most markets. 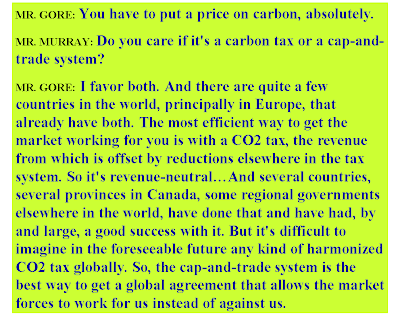 What the video narrative does not mention is that permits to spew, called allowances, will only be free for the big emitting industries in the earliest stages of the proposed U.S. cap&trade system. This, yes, makes it financially appealing for them to participate. Like it or not, and NewEnergyNews likes it no more than Ms. Leonard does, the fight against climate change will succeed or fail only to the extent of the big emitters’ participation. Giving them a means to benefit as they incur the costs of transitioning to New Energy and Energy Efficiency gives the world a fighting chance, even if it makes the process seem, in the early stages, a bit like the heinous medieval practice of buying indulgences.

This post is based on the video The Story of Cap & Trade.