There is not now any smart money betting that Congress will produce a substantive energy and climate bill in this term. Health insurance reform left gapping holes in the fabric of Congressional cooperation and the Gulf oil spill has not left a moment to repair them.

Each side has its champions and there are several bills with measured compromises that very few support. The economic benefits lost to this inaction is deeply troubling but the only reason there is any hope of legislation getting through the Senate is that Senators are so full of themselves. They could conceivably remain oblivious to the administration’s struggles with the mess in the Gulf, the mess in Afghanistan, the mess in the economic recovery and the many small messes of each passing moment and pass something.

But even if the Senate does squeeze out some legislation, its bill would likely be irreconcilable with a very different House bill passed in the very different and now distant past of the summer of 2009.

It’s a wonderful moment in which to pause and wonder what an ideal energy-climate bill could be. Evaluating Renewable Portfolio Standards and Carbon Cap Scenarios in the U.S. Electric Sector, from market and policy impact analysts at the National Renewable Energy Laboratory (NREL) does some of that. ::continue:: 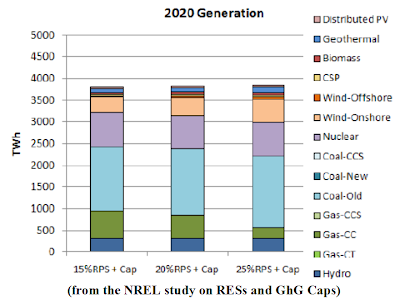 An ideal energy bill would certainly include a national Renewable Electricity Standard (RES) – known in the more wonkish NREL circles by its previous name of Renewable Portfolio Standard (RPS). An RES would require the nation’s regulated utilities to obtain a specific portion of their power from New Energy sources by a specific date. The big RES questions are: How much New Energy? And by what date?

An ideal climate bill would include a hard cap on greenhouse gas emissions (GhGs). The questions that come with a GhG cap are: How much of a reduction how soon? And what is the best and fairest method to implement and achieve the cap?

The study looks at impacts from a cap similar to that in the House legislation (H.R. 2454, a.k.a. the Waxman-Markey bill) and lower and higher caps. It looks at impacts of RESs requiring utilities to get 15%, 20%, and 25% of their power from New Energy by 2020 with variations on the implementation schedule running to 2030. It models variations in the mix of energies, the amount of GhGs and the price of electricity to see how they affect the impacts of the policies.

The study’s caps and RES requirements are more stringent than would likely emerge from Congressional legislation which, necessarily, must be the result of compromise. The numbers might be the same but legislation would likely exempt some utilities or allow efficiency to substitute for New Energy.

Like Waxman-Markey, the study’s base cap would cut U.S. GhGs 17% from the 2005 level by 2020, and 42% by 2030. It also follows Waxman-Markey by including an allowance market in which capped emitters could buy and sell emissions allowances to meet their caps, as well as offsets and the banking of allowances.

The study considers a “low cap” (that allows 20% more GhGs than Waxman-Markey) and a “high cap” (20% more restrictive than Waxman-Markey) and it assesses the issues and impacts of implementing a Cap&Trade system and an RES simultaneously. It draws its conclusions for this section partially from experience in the Regional Greenhouse Gas Initiative (RGGI) and the European Union’s Emissions Trading Scheme (ETS).

The study’s key finding: A GhG cap and an RES can compliment one another. The first cuts GhGs and the second drives the growth of New Energy. Both actually do a lot of both and both are more effective when implemented in conjunction with policies driving Energy Efficiency (EE). 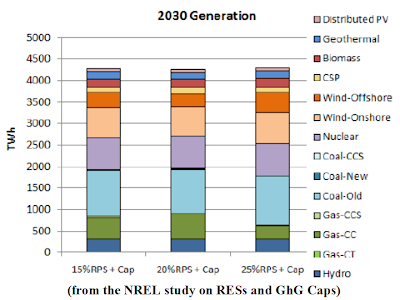