There is a newly reborn determination to aggressively build New Energy and Energy Efficiency until global climate change is turned back by choking off the Old Energy-generated spew causing it. Momentum started gathering in the darkness of shock and disappointment at the outcome of last month’s Copenhagen climate summit. The political turn of events in Massachusetts has sparked the drive to brightness.

Many of the heroes of the European Union at the forefront of the effort to introduce EU-wide and international policies to cut greenhouse gas emissions (GhGs) have turned to the building of New Energy (NE) and Energy Efficiency (EE) with a renewed fervor.

Deutsche Bank (DB), which has been at the heart of the EU effort to build an effective cap&trade system to reduce GhGs since its inception, sees the fervor and, in Investing in Climate Change 2010; A Strategic Asset Allocation Perspective, has put out a simple message to its investors: Climate change fighting investments belong in your portfolios because they will make you money. ::continue::

Our Climate is Changing!

Why is one of the world’s most important investment banks and financial institutions so certain bets on climate change fighting companies will pay off? Because:

(1) Governments around the world have mandates and policies in place to drive NE and EE growth and more and better such policies are emerging;

(2) Climate and environment concerns, national security concerns and the push for economic recovery are driving technological innovation like never before;

(3) Climate change investment covers NE, EE and much more (such as effective water management and increased agribusiness productivity), sectors that outperformed markets in 2009 and are set for unprecedented growth;

(4) Climate change investment means investing in the new infrastructure that economic recovery funds are already supporting and will continue to support around the world;

(5) Climate change investment is growing as a percent of total market size and by that measure alone warrants expansion in portfolios; and

(6) The DB analysis demonstrates that inclusion of climate change sectors in a portfolio improves returns. 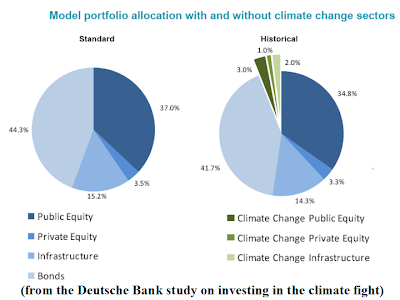 Footnote: This puts yet greater emphasis on effectively designing incentives that will drive the growing momentum to build NE and EE, as described in LOOKING FOR THE BIGGEST NEW ENERGY BANG FOR THE BUCK, which outlines what Deutesche Bank has learned about incentives from watching the growth of the New Energy industries in the EU.

Deutsche Bank’s long engagement suggests there are 3 requirements for effective incentives, transparency, longevity and certainty (TLC). Experiments with incentives in the U.S., Japan and the EU have taught much about what imparts TLC to New Energy growth and it is being incorporated into emerging nations’ ambitious programs. This will greatly add to the industries’ momentum and the value of investments in them.

Bottom line: Bets on the things that will turn back climate change will pay off in many ways. 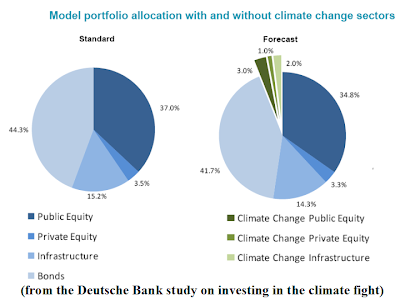