For at least 2 decades, so many have invested so much in the dream of growing an oil substitute. Yet efforts so far have worked out very like that dreaming feeling in which the harder the striving, the more the objective recedes.

Despite Herculean efforts by political leaders to subsidize AGROfuel development (see Ethanol’s Federal Subsidy Grab Leaves Little For Solar, Wind And Geothermal Energy) and ceaseless ingenuity by laboratory scientists and chemical engineers to streamline AGROfuel processing, first-generation field-grown liquid fuels, especially grain and sugar ethanols and oilseed biodiesels, have proven counterproductive. They cost too much to grow and refine and the full production processes generate more greenhouse gas emissions than they save.

Despite enormous amounts of money poured into research and development, a way to economically produce second-generation (non-crop) biofuels at commercial scale has eluded the most ambitiously dedicated lab scientists and the entrepreneurs who have sponsored them.

Is the dream, especially the dream without the harsh reality of government subsidies, dead? In Biofuels 2010: Spotting The Next Wave, Joshua Kagan and Travis Bradford of the Prometheus Institute say the world’s drivers may be about to awaken to see the attainment of the dreamers’ wildest imaginings.

(1) What are the different types of biofuels and which are worth more effort?

(2) If any biofuel will ever be able to compete in the liquid fuel marketplace without subsidies, when?

(3) If any biofuel can be a petroleum substitute, when will it achieve commercial scale capacities?

They looked at 40+ first-, second- and third-generation biofuels producers, studying 5 key factors: (1) local and world market dynamics, (2) technologies, (3) policies and how they have or might impact the market, (4) feedstocks, and (5) the economics of current and coming options.

Their conclusion is that the biofuels paradigm is poised for a shift. Second-generation cellulosic (non-crop) ethanol is likely to become a reality by 2011, though its success will be limited. Third-generation technological biofuels, especially algae-based biofuels, will – if producers achieve the advances predicted for algae – “almost certainly” become price competitive with petroleum-based liquid fuels WITHOUT SUBSIDIES by about 2016 and thereby revolutionize the biofuels industry.

A crucial aside: Because there is much made of algae’s voracious consumption of carbon dioxide (CO2), some climate change activists have attacked hopes for it. They want to squelch the belief it is an answer to the problem of greenhouse gas emissions. Algae, they are right, are not the answer to the world’s worsening challenges from the burning of fossil fuels. Algae are simply the most efficient and least harmful sources of jet and heavy transportation liquid fuels. They are certainly not an excuse to go on burning coal. 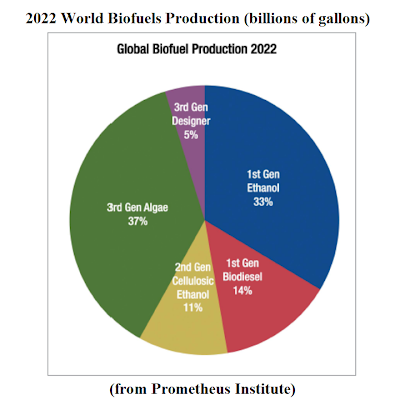 This post is based on Biofuels 2010: Spotting the Next Wave Joshua Kagan and Travis Bradford, December 7, 2009, rometheus Institute/GTM Research