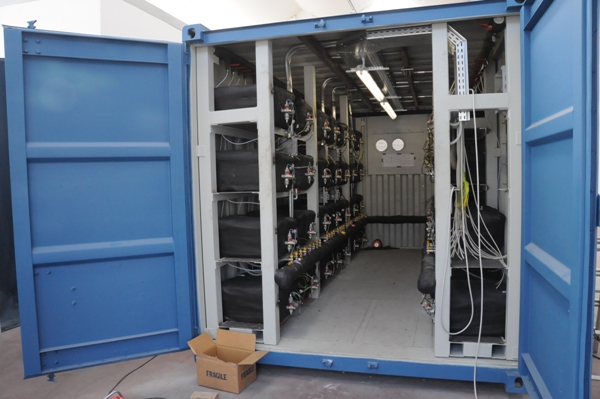 These are exciting times for clean, cheap energy as the first of many breakthrough products using radiation-free nuclear reactions is about to be demonstrated. On October 28th, Andrea Rossi plans to demonstrate his a one megawatt nuclear boiler in Bologna, Italy. It will be powered by tiny amounts of nickel and hydrogen. Fuel usage is so minuscule that it easily qualifies as renewable energy. The entire plant is built inside of a standard shipping container.

Andrea Rossi, the creator of the technology, is not a nuclear scientist but rather a hard working, nonconformist inventor who rushes ahead, doing things his own way. My guess is that the demo will happen on schedule but will probably not satisfy many skeptics who love to find fault with anything that is not peer reviewed. The tests will be done by representatives of his first customer, whose name is secret at the moment. Rossi plans to begin taking orders and running the 1 MW boiler continually in November. He quickly answers questions on his blog, so you can easily get an instant status update by reading his answers.

A recent (October 6th) demo of one of the 52 modules that will constitute the megawatt plant was witnessed by a group of distinguished scientists that included the following:

The test ran for three hours without any external power, producing a significant amount of heat. The unit was then reweighed and disassembled in full view of the assembled crowd. It was promising but could have been better planned to satisfy the skeptics. The Oct. 28 demo will be for a US customer who remains anonymous. (note: The Google translator translates the very common name “Rossi” to “Smith”)

The U.S. press has remained strangely silent about reporting this technology but a Forbes article and a Computerworld article finally appeared after the Oct 6 demo. My previous articles in Renewable Energy World were about the only coverage available outside of the cold fusion and LENR blogs. Hopefully that will change next week.

Rossi is the first but not the only game in town. A variant of the technology was demonstrated in 1994 by Focardi and Piantelli. That experiment generated power continually for almost a year. Rossi developed a nickel nanopowder and a secret catalyst that significantly increases the power output. He hired Dr Focardi as a consultant to help complete his development. Piantelli, who originally conceived the idea of using nickel-hydrogen back in 1990, recently amended his, already pending, patent application to include the use of nickel powder. Rossi is fighting this move. Piantelli has apparently demonstrated a nickel powder version of his own design which he is trying to sell. This, and other legal battles, is proof that the technology is real.

Another battle has arisen with the Greek company, Defkalion, which was supposed to buy rights to the Rossi technology but never made the payment. They now claim to have working prototypes that they are planning to sell soon without a license from Rossi. They may have developed the technology without the secret catalyst Rossi was trying to sell them. Rossi has an Italian patent on the technology but the currently published version does not reveal the important details of the catalyst. Possibly the patent was amended at the last minute to keep these details secret. Defkalion may have figured out how to make the powder and catalyst themselves and thus don’t want to pay the license fee.

An invention of this importance will certainly be difficult to keep under proprietary control. If it works as Rossi claims, there will ultimately be little need for messy, polluting fossil fuels. Perhaps the press blackout was a good thing because it kept the fossil fuel interests, who might have tried to kill the technology, in the dark. The current legal battles may be just a hint of fiercer battles to come.

Anyway, the genie is out of the bottle. There are many, less flamboyant, developers waiting in the wings to make the idea of clean, cheap nuclear power a reality. Brillouin Energy Technology in Berkeley, CA claims to have a nickel-hydrogen system under development that has achieved 2X power gain.

Looking further into the future, Lawrenceville Plasma Physics (LPP) is making progress on their direct-to-electricity fusion generator which uses boron fuel in a reaction that produces no neutrons and no radioactive waste. They are continuing to optimize their plasma focus technology. Their latest monthly progress report indicates that they have increased their output significantly.

It is really sad that the Department of Energy has been no help at all in any of these important developments. They seem to prefer throwing massive amounts of money at well-connected projects like uranium-based fission, Tokamak fusion, hydrogen cars, corn ethanol, and “clean coal.”
Disclosure: I recently purchased stock in LPP.