The cost of the spew coming from the engines and motors that burn fossil fuels, from giant coal plants to individual passenger vehicles, can be calculated in more than one way. Britain’s landmark Stern Review characterized the costs of global climate change. The National Institutes for Health recently teamed with Lancet, a prominent UK medical journal, to expand in detail on the potentially devastating health impacts of the world’s spew. (See CLIMATE CHANGE & PUBLIC HEALTH)

Though it is widely acknowledged that increased levels of pollution cause increased levels of things like asthma and pneumonia, The Impact of Air Quality on Hospital Spending, from the RAND Corporation think tank, is the first comprehensive look at the costs of spew in the hospital system. It concludes the nation could have taken almost $200 million dollars off just one state’s spending on hospital-based medical care over 3 years if that state had simply met Clean Air Act standards.

Not meeting the requirements for particulate matter (PM2.5) and ozone spew caused almost 30,000 health “events” (leading to emergency room visits and hospital admissions) in California in the 2005-to-2007 period. It cost public purchasers of health care such as Medicare and Medi-Cal over $130 million for hospital expenses alone. Private health insurance (including managed-care and fee-for-service insurance plans) paid over $55 million because of dirty air.

If that doesn’t make the issue of air quality seem urgent, maybe this will: The most common hospital-based medical care required due to elevated air pollution levels in the study period was 12,000+ emergency room visits by children 17 and under suffering asthma attacks. ::continue:: 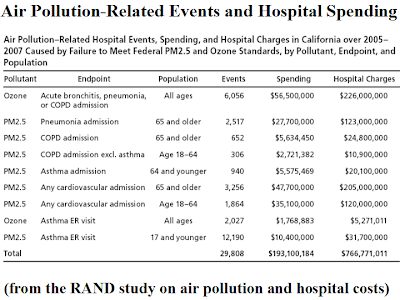 The money spent could have paid for flu vaccine for 85% of California’s under-15-year-old children.

What is clear from the Rand study: There is something to be gained for a whole system of stakeholders (private insurers, employers and public insurance programs) in stopping the spew and, coincidentally, stopping the spew would help bring back the U.S. economy, add a whole category of new jobs for the workforce to fill, shift the nation away from investing in foreign oil and toward the building of a domestic, emissions-free energy infrastructure, and turn back global climate change and all the harms that would follow from it. 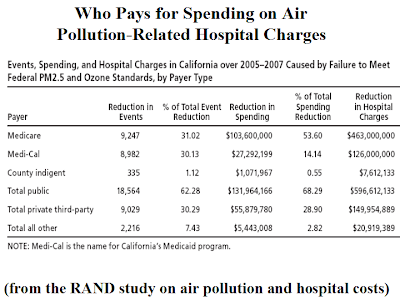 This post is based on The Impact of Air Quality on Hospital Spending by John A. Romley, Andrew Hackbarth and Dana P. Goldman (March 2, 2010, Rand Corporation) and Dirty Air in California Caused $193 Million in Hospital-Based Medical Costs During 2005 to 2007, March 2, 2010, RAND Corporation)