Climate change is, alas, still popularly if inaccurately named global warming and the easily distracted and uninformed dismiss it, though what could potentially be a worse cataclysm than those inflicted by Adolph, Saddam, Stalin, or Attila is gathering.

Senator Maria Cantwell (D-Wash), seeing both (1) the need for urgent action to halt the proliferation of greenhouse gas emissions (GhGs) generated from burning fossil fuels that are causing rapidly worsening worldwide flux and (2) the Congressional stalemate on energy and climate legislation that is blocking U.S. action while the world awaits its leadership, has another idea. She wants to rename the U.S. effort against climate change.

In A refreshing dose of honesty; Maria Cantwell and the politics of global warming, The Economist describes Senator Cantwell’s effort to rename and reframe Cap&Trade as Cap&Dividend, something she and many others believe will be more politically viable as well as more equitable for the nation’s taxpayers… ::continue:: 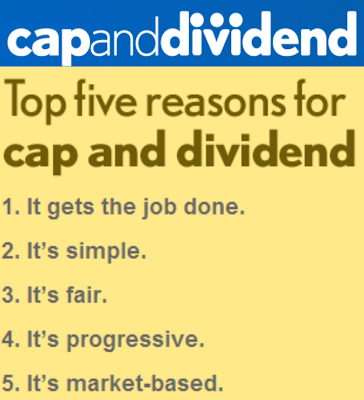 In a Cap&Dividend system, big emitters (utilities, power plants, heavy industry, oil and gas importers, etc.) would be required to purchase auctioned allowances for the GhGs they generate. The auction would create a price competition that would force them to pay for emissions but also drive them to seek the cleanest possible practices so as to get the edge on their competitors…

Cantor CO2e is one of the world’s biggest and most experienced emissions trading houses. In business since 1992, it was instrumental in the success of at least 2 Cap&Trade systems now in place. Josh Margolis, co-CEO of the company, doesn’t think Cap&Dividend is workable. An outspoken advocate of Cap&Trade, Margolis believes Cap&Dividend leaves the fundamental impulses that drive U.S. business out of the equation.

“Simply put, Cap&Dividend is designed to inflict pain on the emitters,” Margolis says. “But it doesn’t provide the emitters with a significant incentive to benefit from changing their behavior to avoid the pain or reduce GhGs beyond the basic cap requirement. Instead, emitters are incented to do just enough to minimize the pain,” Margolis explains. “Under Cap&Dividend, prudent managers will purchase just enough allowances to operate, pass on the cost to consumers (who in turn receive a rebate to minimize their own pain). While Cap&Dividend sources can sell odds and end allowances that were purchased at auction, these sources are prevented from selling allowances that are the result of game-changing modifications that free up previously granted allowances. In Cap&Dividend, an undesireable steady state is reached where excellence and ingenuity is replaced with calloused mediocrity.” 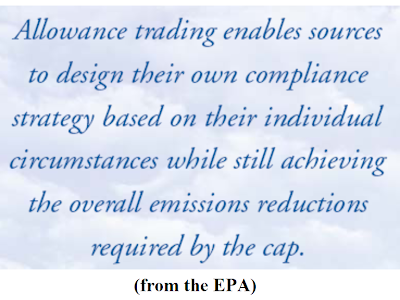 “The dividend process diverts money from the sources that need to retool and gives it instead to well-meaning bureaucrats and consumers,” Margolis goes on. “What consumers need is jobs. Under Cap&Dividend, as the cap tightens and the pain grows, these jobs will leak to uncapped countries or countries with free allocations. In a properly designed Cap&Trade program – one that gradually reduces allocations and allows emitters to turn their waste streams into profit streams – consumers will get a meaningful dividend – they get to keep their jobs.”

Any Cap&Trade system that emerges, after the House proposal is reconciled with whatever survives the Senate, would be similar to the one used to control acid rain in the U.S. in the 1990s and to the one effectively being used at present to control GhGs (despite pioneering difficulties) in the EU. It would put a hard cap on industrial scale emitters and create a market where they could buy extra allowances to emit (if that was the only way they could keep doing business) and/or sell excess allowances (if they used efficiencies and New Energies to do business with fewer emissions)…

The first imperative of any effort against global climate change is to put a hard cap on emissions and ratchet it down without deviation over time. “A cap and trade program will produce results that are consistent with it’s design,” Margolis says. “If it is designed with a gradual decline in allowed GhGs, it will produce a low price on carbon in the early years and a higher price in the later years.

“A system which allows sources to over control and sell surplus emissions capacity,” the CantorCO2e CEO explains, “is one that actually incentivizes sources to over comply so that they can sell surplus allowances. You want to see results? Tell the facility manager that he can sell what he doesn’t use. Then stand back (and enforce) and watch the profit motive at work. This worked in the acid rain program. It will work with GhGs.” 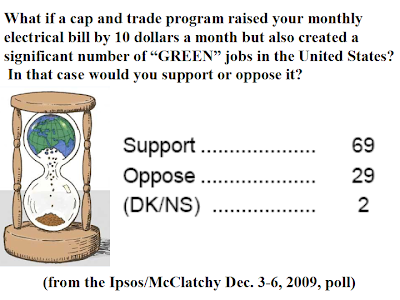 Cap&Trade is not unpopular when it comes with jobs. (click to enlarge)

…With Washington, D.C., immersed in issues that will impact the November 2010 mid-term election, the urgency of an issue like global climate change remains as veiled as if it were incognito. Recent polls suggest voters are not yet ready to realize the guy who looks no more threatening than Old Man Winter is actually Adolph Saddam Stalin the Hun Warming in disguise.

A professor at the California Institute of Technology often remarks that the American people are not stupid; they are slow, but they are not stupid. Sooner or later, it is likely they will realize who the real evil doer is. When they do, it will be quite interesting to see how they judge the leaders who are now guiding them.

This post is based on Cap&Dividend, Cap&Trade or Cap the Debate?, Herman K. Trabish, February 9, 2010, NewEnergyNews